With most of the globe enjoying the World Cup fever right now, it seems like the perfect opportunity for a game like Soccer Story to be unleashed by publisher No More Robots and studio Panic Barn. Whether you prefer to call it football or soccer, this is a popular sport that usually makes for fun gameplay out there on the pitch. Yet, despite the initial promise and the timing, Soccer Story leaves much to be desired even for an experience that is relatively short.

Following the event known as The Calamity, soccer as a sport is universally banned. The soccer-loving folks of this world, both animal and human, are not even allowed to speak of the sport, let alone play it. Matches are only possible under the iron fist of Soccer Inc and its corrupted leader, Bep Jatter, a less-than-subtle reference to the real-life figure that used to run FIFA, which I most certainly appreciated. It is under such circumstances that the player, either the sister or brother of twin characters, gets chosen by a magical soccer ball to save the day.

Thus begins a narrative-driven roleplaying experience that will test both your skills with the ball as well as your puzzle-solving acumen. Instead of just focusing on the actual sport, Soccer Story fills the world with plenty of other things to do – some good, some bad – though all designed to ensure that the magical ball is never too far away from your feet.

There are targets that can be shot down for extra money, obstacles can be slide tackled to destroy them, and as you earn various medals to upgrade your speed, energy, shooting, and strength, you will gain more of a mastery of the mechanics that govern the world of Soccer Story. Beginning from the starting area of ​​Soccertown, it will be up to players to convince disbanded teams and their animal captains that soccer is back from the dead, running all sorts of errands and eventually culminating in a cup tournament to show Soccer Inc that the people are ready to make a stand.

Your mileage with the game will likely differ based on how much you actually like running around the admittedly pleasantly pixellated world, doing fetch quests or using the ball to solve puzzles. While the former is straightforward enough, it is the latter that will cause some frustration. While I can appreciate the measure of control involved in kicking the ball, the actual implementation leaves much to be desired. Aiming with the right stick can be finicky, and once you improve the shooting stat, adjusting the power levels by clicking in on the same stick doesn’t feel that much more natural, either.

Add to that certain puzzles that require precise timing and aiming, and you could be in for a long and bad time. There are instances where it works, such as scoring in various goals with the Goal Appreciation Society or hitting targets hidden around the town for another group. Other activities, such as refining your passing skills in a Rondo or playing some beach volleyball with your feet tend to make more sense, and the less said about the dribble challenges that task players to find the end themselves, the better. It remains a mixed bag. 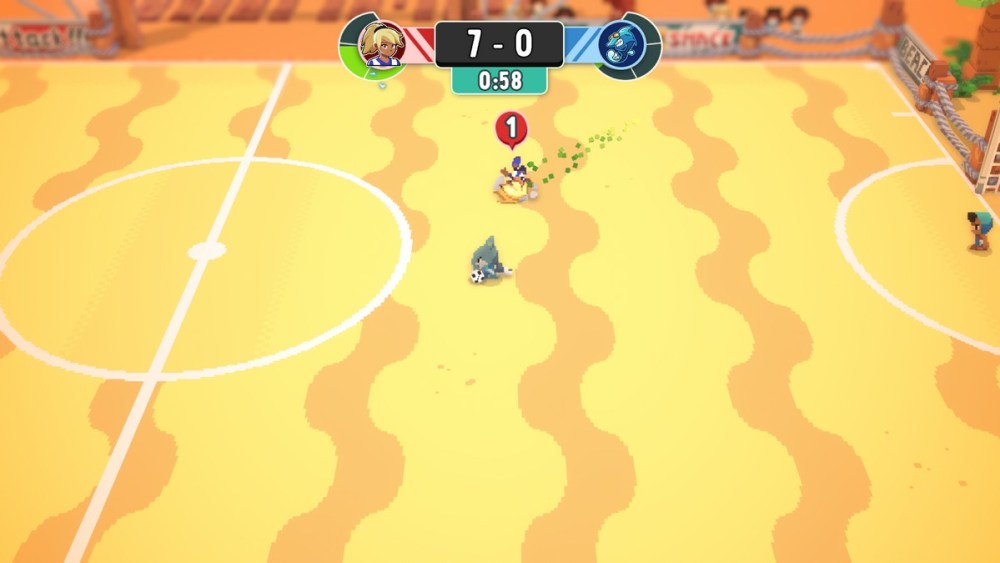 However, the rewards of either more cash to buy upgrade medals or the actual medals themselves are important if you want to win. This progression system is at least engaging, considering that you will have several players, including yourself, to improve. That said, it is not exactly paced well either, with my main character being maxed out by the time I hit the second town or so, which definitely feels like it shouldn’t be the case.

Moving onto the actual action on the field, don’t come expecting a FIFA 23-like experience, either. Instead of full teams of 11 vs 11, the main action in Soccer Story is delivered via 5v5 matches, with four outfield players and a goalkeeper. It’s a simple setup, with only buttons for shooting, passing, and slide tackles, bolstered by additional moves that will unlock with progress, including more powerful skill moves that rely on building a meter by staying in your opponent’s half with the ball. Score more goals than the opposition, and you win.

Yet, how you win is also a big point of contention. Even with such a straightforward setup, there must be some ways that Soccer Story can still be challenging. On the highest difficulty settings, it can be too easy to steal back the ball from the opposition by knocking into them, speeding away, and peppering their goal with shots. Passing is less than useful, and even the shooting feels a little off. It is more the exception than the norm to find yourself scoring when facing the goalkeeper one-on-one, with the custodians veering from being almost unbeatable to laughingly porous on occasions . 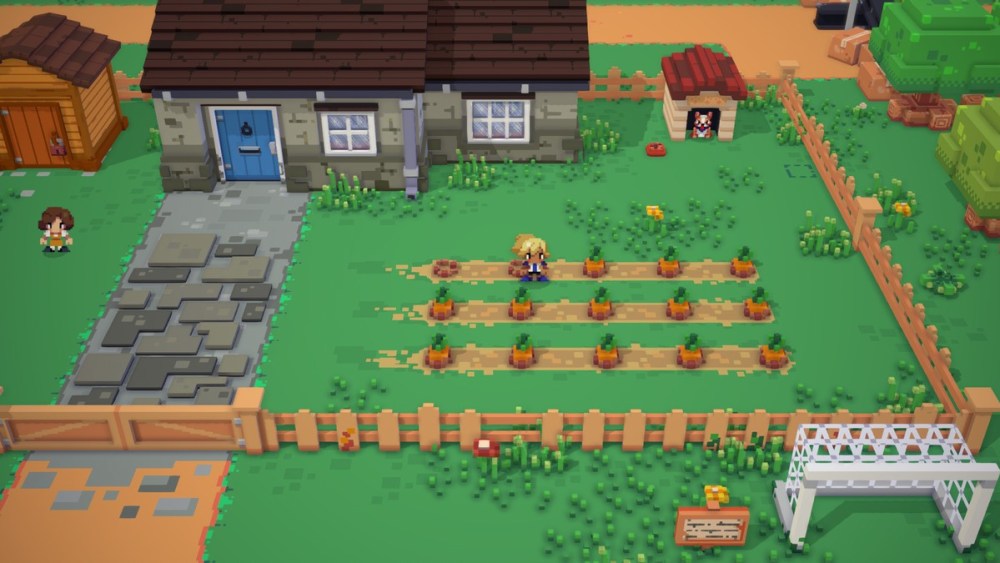 It becomes even more ridiculous in the 1v1 matches, where scores can become exaggeratingly one-sided, especially against an opponent that is clearly outmatched by your better stats. Rather than being able to enjoy a few minutes of The Beautiful Game, I found myself winding down the clock by running circles around my opponent most of the time.

Such a design can definitely be entertaining outside of the main story mode in local multiplayer, which Soccer Story makes possible with up to four players. The variety of teams and captains, as well as stadiums, is a nice touch, but it will not be what the game will ultimately be judged on.

At the very least, I enjoyed the writing in Soccer Story, with all the inside jokes and the distinction between the towns found in the world. It is fun to look at the sport through the different lenses of the townsfolk, whether it be those enjoying the sandy beaches or gym rats that have turned to athletics. The villains are also an interesting bunch as well, together with their dastardly plans to foil the comeback of the sport.

Soccer Story is by no means a perfect game, especially where there are bugs and glitches that require a hard reset and cause a loss of progression, but it does manage to deliver an entertaining time on occasion, even if it doesn’t necessarily have to do with the ball on the pitch. It might not be a great recommendation for those that are looking for more soccer action, but as a narrative-driven roleplaying title that just so happens to involve soccer, Soccer Story remains something worth checking out if you temper your expectations. 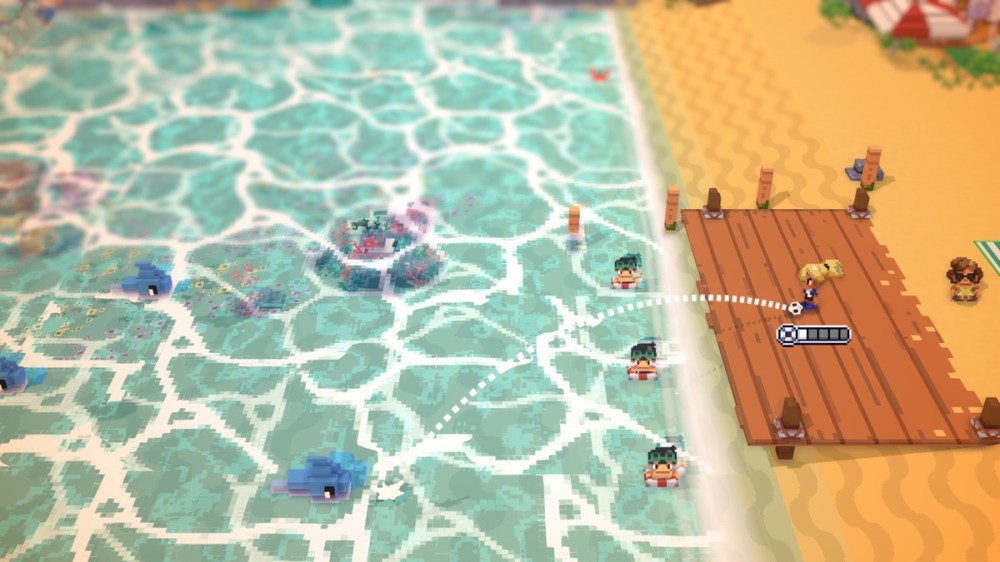 Like I've said before, there are too many Warhammer games, and one of the big downfalls of that carefree licensing is that when there...
Read more
PC Gaming

Don’t worry, Destiny 2 fans – the Gjallarhorn Nerf will be in-game too

There's a new Age of Empires 4 patch out now that heralds the arrival of Season 2,...
Read more
Games

The League of Legends World Championship is in full swing, but that doesn't mean the game itself is slowing down any. ...
Read more