World of Warcraft’s next expansion, Dragonflight, aims to ease up on the throttle and offer an experience that’s less cataclysmic and more comfortable. After 18 years, the sheer passage of time has changed World of Warcraft, and the game has wandered off into some truly wild territory. Dragonflight is a course correction back into the cozy.

The “third place” is a sociological phrase for the spot we go most when we’re not at work or home. Whether it’s a relaxation station or a social hub, a third place should be chill. For many players over the years, World of Warcraft has been their third place. Recent expansions have pulled players into an endless series of epic adventures and endgame content. We’ve traveled to the undersea kingdoms of a tyrant Naga queen, gone to fix the realms of death, and even checked out a mind-warpingly alien cosmic cradle of creation. Dragonflight will add on new adventures, but we’ll also have time to enjoy simpler pleasures — making it an ideal third place.

“It was like a homecoming to create the land itself,” says Tina Wang, associate art director at Blizzard, in a call with Polygon. “There’s a sense of majesty; we wanted to create a sense of undiscovered wilderness.” Players will be using their new dragon-riding to see all of the Dragon Isles from above, but they’ll be spending some time smelling the metaphorical roses. “We created these pockets, thinking of them as the seats of power for the various Dragonflights, and where we put them dependent on their decisions and what made sense with what cultures they were associated with.”

For all of the faults of past expansions, the launch content of new zones and quests has been well received. It looks like Dragonflight is going to follow in that tradition. These territories in the Dragon Isles are contested by factions both new and old. While leveling up, players will meet centaur tribes and tuskarr settlements. It’s a huge step down in stakes after Shadowlands, and a welcome one.

There will still be the usual kinds of quests, like collecting hides and slaying enemies. The endgame sees the biggest deescalation, with max-level activities asking players to hang out and build bonds with new friends in those factions. Instead of holding off the end of the world, we’ll be fishing with walrus friends or hunting with new allies.

“It was a huge team effort to create these spaces in zones that are enormous by World of Warcraft standards,” says Jake Miller, senior game director on World of Warcraft. “As the player makes their way through the zones, they unlock new abilities for their drakes, as well as new drakes in each zone. So if the protodrake doesn’t quite fit your jam, the velocity drake might — that’s my favorite, he’s got a big toothy grin.”

The player will spend a hefty amount of their time on the back of a drake, which they can customize and upgrade with glyphs hidden around the Isles. The Isles have also been built with tons of open plains, vertical towers and peaks, and immense, ancient architecture. 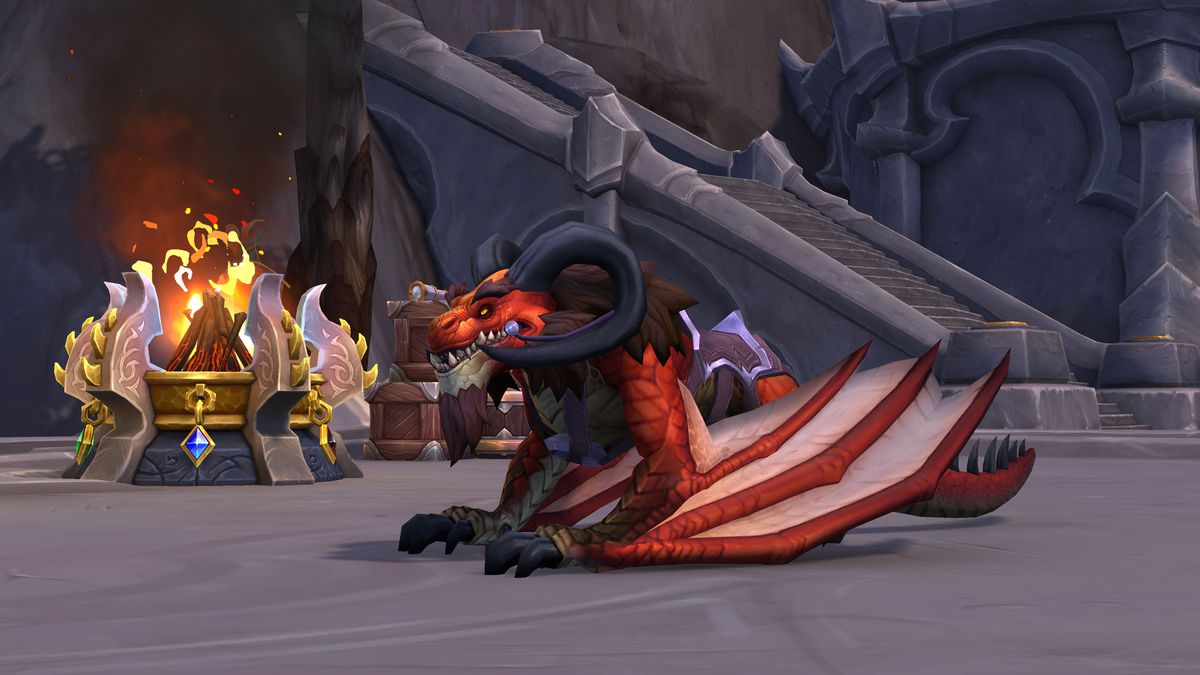 “Learning from the recent, previous expansions and seeing what we could do, we knew the first-blush impression [on dragon-riding] would be super important,” says Miller. “So we sought to create something that was really fun, engaging, and felt almost early. Locomotion and exploration gives players a non-time-locked, completely player-driven way to progress.”

Valdrakken, the social hub and capital of Dragonflight, is also much different than its predecessors. Battle for Azeroth had two capital cities, one for each faction, and Shadowlands’ Oribos was more of an interdimensional airport than a proper home. Players are expected to spend a lot of time in Valdrakken working on their professions and trading with other players, and the Dragonflights have made it comfortable for us mortals.

All of this seems like it’ll make Dragonflight a far more comfortable third place than previous expansions. Blizzard will need to build on this foundation over the expansion’s subsequent patches and ensure that this status quo reset doesn’t immediately rocket up to galaxy-ending threats. But ironically, players seem excited for a game that’s less on all the time.

Azeroth has been a third place for fans throughout the years. A recent fan comic anthology, Interlude, shows stories of Warcraft champions at rest during the post-Shadowlands time skip. Dragonflight seems like a calmer, gentler time, while still introducing new conflicts to settle and lands to explore.

Dragonflight will be released on Windows PC on Nov. 28.

It's looking like Sonic Frontiers still has legs on it. The “open-zone” Sonic game, which blends traditional 3D and 2D Sonic levels...
Read more
Games

Rumbleverse Is A Battle Royale With No Guns, And I Suck At It

How Tall Is She Hulk?

The weekly exotic item merchant, Xur, hangs out in random locations around the world of Destiny. In Destiny 2, he can...
Read more