For a game about a world-ending maelstrom of fire and blood, God of War Ragnarök sure fizzles out. The finale for Santa Monica Studio’s latest, out now for PlayStation 4 and PlayStation 5, is as satisfying as it is thematically sound. It also misses a chance to do the brave thing — resulting in a creative misfire that, in my mind, holds Ragnarök back from greatness.

[Ed. note: This post contains full spoilers for the final act of God of War Ragnarök.]

Just so we’re on the same page about what I’m referring to: Kratos lives, which, whatever, that’s fine. After the credits roll, though, you continue playing as him. That’s less fine! God of War Ragnarök had a chance to do something truly unexpected with its endgame: It could have put you in the shoes of Atreus. Instead, by picking back up after the end credits with Kratos going on another all-expenses-paid killing spree through the nine realms, Ragnarök relies on the “keep killing everything in sight to find trinkets” formula that’s defined big-budget video games for a generation.

To be clear, I mostly enjoyed God of War Ragnarok’s ending. The final chapter is a whizbang flurry of twists, turns, and indulgent if illogical deus ex machina moments. Watching Kratos, Atreus, Freya, and their allies storm Asgard is genuinely epic according to the original definition, fit to be read by some dude named Homer — a feeling that’s underscored further by composer Bear McCreary’s wall-rattling orchestral arrangement. Switching between playable characters at key moments during the climactic battle — a microcosm of the shifting perspectives that define Ragnarök’s act breaks — reinforces the journey the characters have gone on over the course of this game. The final fights against Thor and Odin are bonkers, especially that part where Atreus snaps a prop from the 1994 film The Mask in half. And the concluding moments, when the heroes escape through a portal created by Angrboda as a now literally giant Surtr smashes Asgard with a sword that’d make Cloud Strife jealous, is legit edge-of-your-seat stuff.

Part of why it’s edge-of-your-seat stuff, though, is that you go into the final battle anticipating Kratos’ death. His death got foreshadowed quite a bit, after all. At the end of God of War (2018), Kratos sees a prophetic illustration that he believes is a foretelling of his own death, and he purposefully hides it from Atreus. A few chapters into Ragnarok, Atreus learns the same prophecy; it’s kinda the whole inciting event of this game. So for two hours of intense battle sequences, you’re waiting for this big, dramatic thing to happen. It never does. 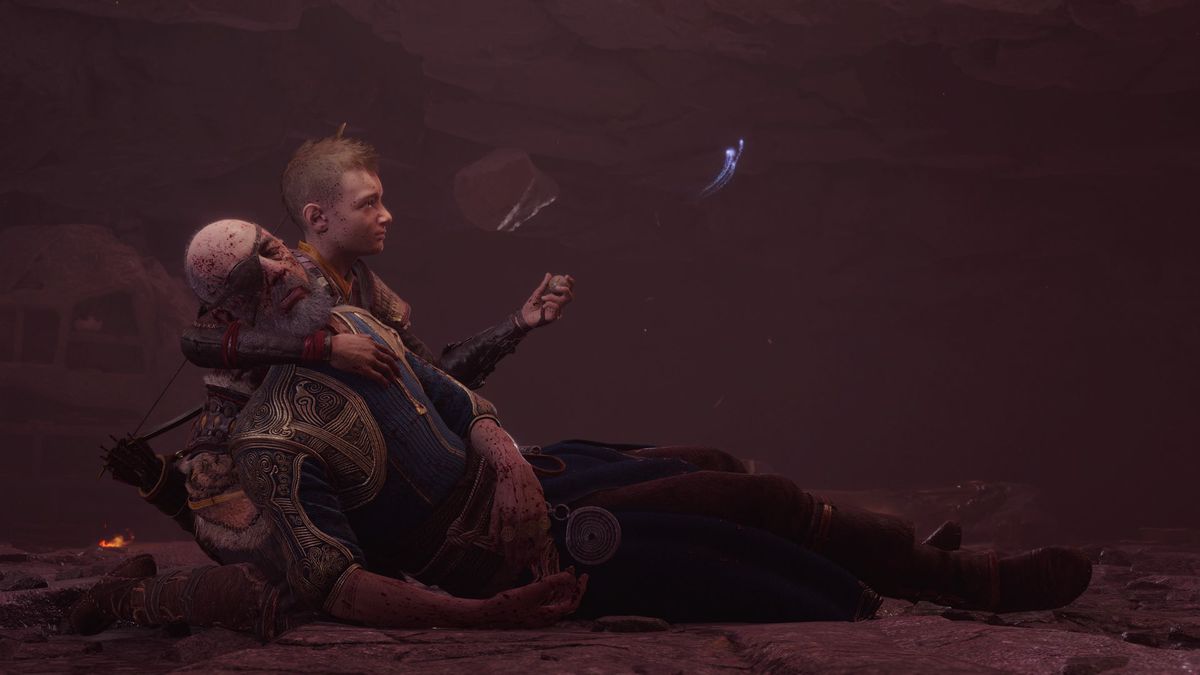 Why not? Because Faye — Kratos’ wife and Atreus’ mom — apparently destroyed the real prophecy, which portrays Kratos as a revered ruler of the nine realms. As for the original prophecy, which depicted an older man dying in Atreus’ arms, Odin’s death in this game looks strikingly similar. Both are called “father,” if we must split hairs, and both have beards. It’s a maddeningly subtle connection that skates by on a technicality.

Right before the credits roll, Atreus realizes he has somewhere to be. Remember how, earlier in the game, you learn the true fate of what happened to the giants? And how they’ve been confined to a bunch of marbles that look a whole lot like the souls from the 2009 indie comedy Cold Souls? They need help, apparently, and — this is key — Atreus says he’s gotta do it on his own. Father and son embrace, resulting in Kratos truly listening to his kid for perhaps the first time ever. Then Atreus scales a cliff and disappears. 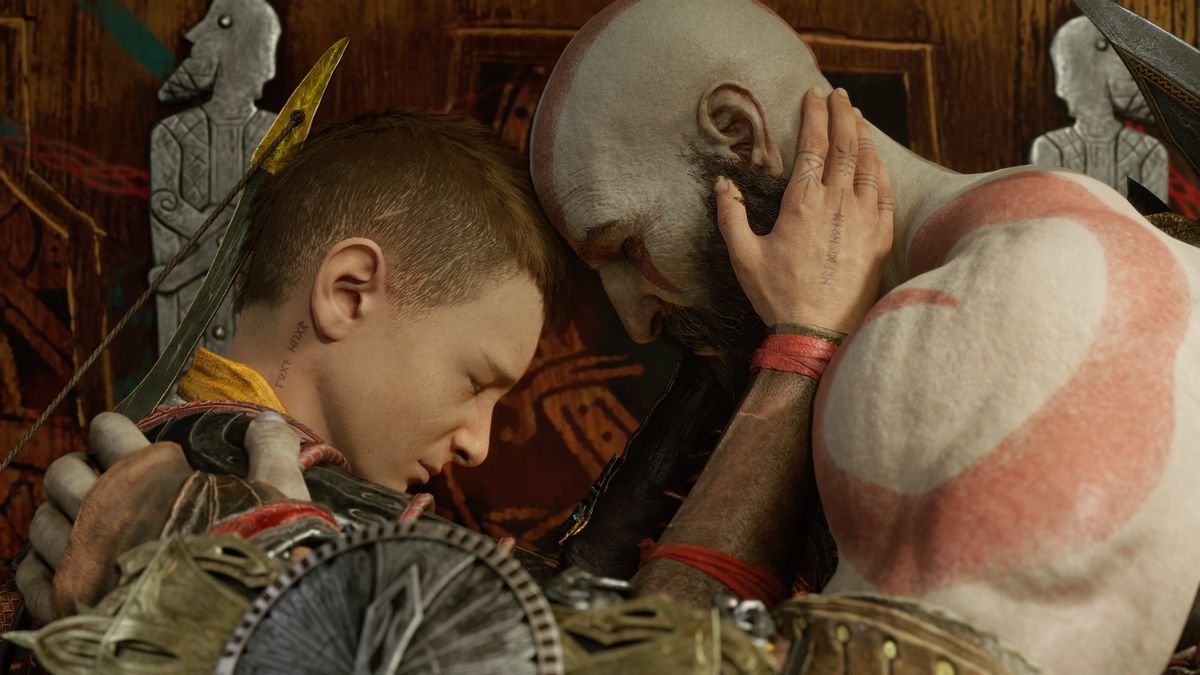 You’re left playing as Kratos, accompanied by Freya, getting to work cleaning up the postwar mess across the realms. You go around, finding and eliminating “pieces of Asgard.” What this means, basically, is that you spend time hunting down and killing small contingents of Asgardian soldiers; because of reasons, they apparently can’t be convinced that Asgard definitely lost the war. You can also find and battle 12 extremely challenging ghost soldiers and kill them for good. Oh, and you can track down Odin’s last remaining lieutenant — and, go figure, kill her. For a dude who’s finally found the goddamn peace and quiet he’s been craving, Kratos sure spends a lot of time on the battlefield.

A better alternative: The endgame was a key opportunity for God of War Ragnarok to pull a Red Dead Redemption and cast you as Atreus for the postgame. He’s a fully playable character in Ragnarök, complete with his own skill tree, customizable abilities, and combat toolkit. Some people (hi there) even find him preferable to control compared to his slower, bulkier father.

Under this hypothetical, the endgame series of missions would instead see you assisting giants, rather than picking off the remainder of Asgard’s army. These missions could even take place in the same locations! Any lingering artifacts? No problem — in one of the game’s better sight gags, Atreus proved he can open chests just fine. Like his dad, Atreus even has the bottomless inventory space perk that comes with being a god. Plus, I’m sure an arrow is just as good at taking out pesky green ravens as Kratos’ spear is.

In hindsight, it’s obvious that Kratos wasn’t ever going to die or even hang up his weapons, at least not in a permanent way. There are too many errant 100% meters to complete in this game, and you as a player have invested way too much time beefing up Kratos’ stats and armor. Plus, in a franchise this lucrative, you gotta leave some room for sequels. (In 2021, developer Santa Monica Studio said Ragnarök is the end of “the Norse saga,” but notably did not say it’s the end of the series.)

God of War Ragnarök is ultimately about trying to reinvent yourself on a fundamental level, to set an example for your children and for anyone else who follows in your footsteps. But in its final minutes, the game inadvertently makes the case for how damn hard that really is.

God of War Ragnarok Artifact locations in Svartalfheim and Alfheim

The best horror games on PlaySation, PC, Xbox, and more

I’ve always had a conflictive relationship with horror. On one hand, I love exploring the genre in all of its forms. I grew...
Read more
Videos

Chainsaw Man Anime’s First Episode Lives Up To The Hype