The Dark Pictures Anthology has been exploring all flavors of horror, from Sumerian demons deep in the desert to ghost ships stranded at sea. The Devil in Me, the newest and final entry in the anthology series’ first season, promises a more intimate adventure, delving into the true-crime story of HH Holmes and his semi-apocryphal Murder Castle in Chicago. This isn’t a story of supernatural mummies or harrowing journeys through time — it’s about five burned-out media employees trying to survive a modern imitator of Holmes (and probably dying in the process).

As in each Dark Pictures game, The Devil in Me puts you in control of a cast of five characters. Players watch the characters go about their media jobs in this weird new place, interact with one another, explore areas, and solve puzzles. The meat and bones of the game comes down to quick-time events where players help their character of choice flee from an attacker, fight off an ambush, or dodge dangerous obstacles. The Devil in Me tackles true crime — and when it focuses on that subject, it gets really scary.

The Devil in Me opens with a tutorial where a young married couple come to Chicago to experience the first Ferris wheel at the 1893 World’s Fair. They have the misfortune of booking the wrong hotel and come face-to-face with Holmes, who ends up murdering them. Supermassive depicts Holmes as a terrifying killer, with unnerving line delivery and literal skeletons in his closet, but the studio deftly captures that he’s also a scam artist. His crowning achievement at the end of the tutorial isn’t cradling a corpse or admiring a skull but stealing a woman’s wedding ring. Even the skeleton we spot in the tutorial is part of the grift; Holmes sold them to medical facilities for a tidy profit.

Past the tutorial, in the modern day, we’re hanging out with director Charlie and his crew: lighting tech Jamie, sound engineer Erin, cameraman Mark, and journalist Kate. In line with past games, these characters have some juicy drama already underway. Kate and Mark are fresh off a breakup, while Erin and Jamie are feeling out of a potential relationship. They all work on a reality TV show that’s almost out of money and dead in the water, but a mysterious benefactor named Granthem Du’Met offers them a chance to tour his property, which is a replica of the infamous murder hotel run by HH Holmes in the late 1800s. Predictably, things go horribly wrong, and Du’Met is imitating Holmes’ tendency to build elaborate murder traps.

Everything great from The Devil in Me centers around the true-crime angle. An obsessed recluse and Holmes stan building animatronics of his victims and coming up with modern murder traps in imitation of Holmes is a genuinely creepy idea, and it’s believable in an era where we tend to treat serial killers with equal parts revulsion and reverence. Netflix recently released a docudrama series about Jeffrey Dahmer that drew heavy criticism for failing to respect the victims’ families. It makes sense that someone might fall into a kind of hero worship for the country’s first urban serial killer. 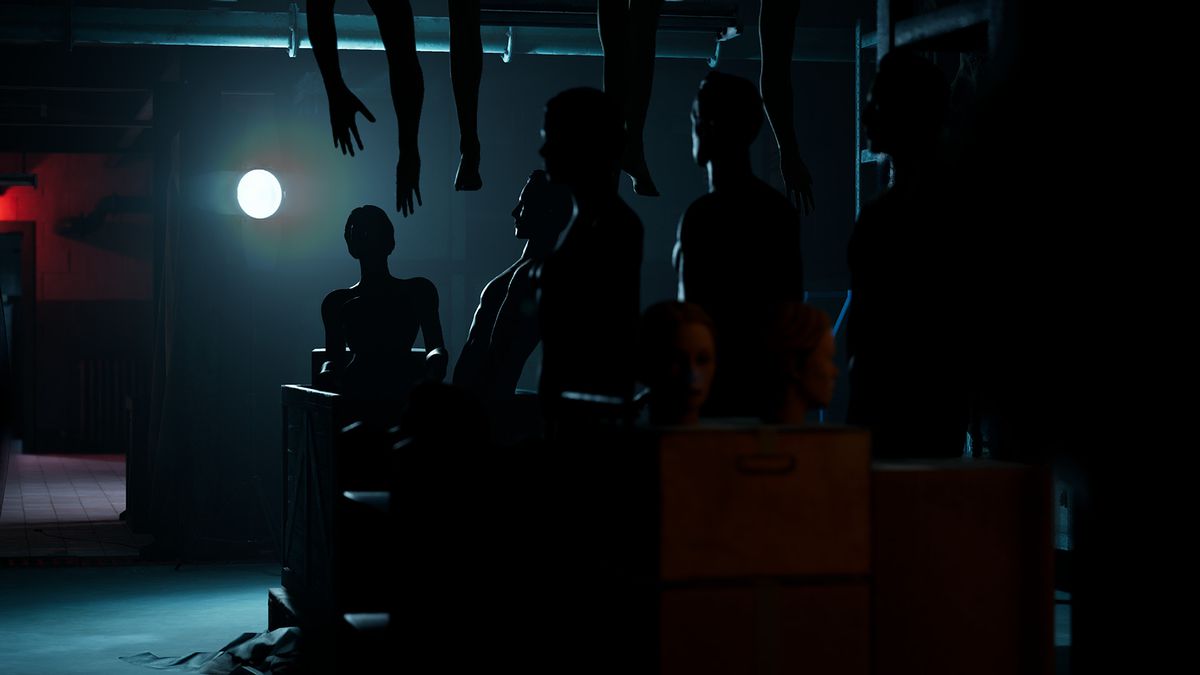 Supermassive spends a lot of time focusing on the fact that Holmes requested to be buried deep under concrete, claiming that there was a devil inside him that drove him to kill, much like a muse drives a poet to write. It’s a great courtroom speech. But the man himself was driven by financial motives as much as murderous ones. The Devil in Me suggests that Du’Met’s machinations are the result of the true-crime craze as much as Holmes’ dark deeds, and it’s a fun idea to chew on.

I’m not totally in love with The Devil in Me; I experienced technical problems throughout my playthrough, combined with some awkward puzzles and unnecessarily long platforming sequences. The new inventory system is neat (grab a certain item? It can show up later during a cutscene for the characters to deploy) but doesn’t feel fully fleshed out. Our primary cast is also a little too eager to surrender their phones and get into a car to their deadly destination so the plot can get moving.

The Devil in Me doesn’t rank particularly high on my personal Dark Pictures ranking — it comes in just under House of Ashes and Man of Medan, which are great for different reasons. But what the game does do very right is take a famous true-crime case and explore it in a manner that comes across as more interesting than exploitative, even while fitting in jump scares and relationship drama. Supermassive could probably have carved a good two or three hours out of this game and ended up with a much stronger product — just as long as it left all of the Holmes-related stuff untouched, please, because that’s where it shines.

The Dark Pictures Anthology: The Devil in Me was released on Nov. 18 on PlayStation 4, PlayStation 5, Windows PC, Xbox One, and Xbox Series X. The game was reviewed on PC using a pre-release download code provided by Bandai Namco . Vox Media has affiliate partnerships. These do not influence editorial content, though Vox Media may earn commissions for products purchased via affiliate links. You can find additional information about Polygon’s ethics policy here.

Learn more about the game at: http://nisamerica.com/games/the-princess-guide/ Preorder at: ... source
Read more
Games

The 14 Best Games For The Sega Dreamcast, By Kotaku’s Staff

Here's a terrifying fact: Sega has been out of the console business longer than they were in it. And while it was the...
Read more
Nintendo

You may recall that, back in June, SEGA and Nintendo announced that Persona 5 Royal would be coming to the Nintendo Switch. The...
Read more
Games

Screenshot: Reddit/KotakuWho produced this amazing pixel art of Elden Ring's Ranni sitting next to the protagonist of Hollow Knight, and why? The answer...
Read more