Punch a monster in Evil West and the connection of armored fist with enemy body makes a cartoon sound effect like a cinder block smacking into a side of frozen beef. Punch a monster some more and it will eventually burst apart with the wet sloppiness of a water balloon filled with ketchup. Sometimes, when using certain moves, punching a monster makes its skeleton zap into sight as its freakish body vibrates, fixed in mid-air with bolts of blue electricity. Shoot a different enemy and his arms might fly off, fountains of blood gushing forth like Monty Python and the Holy Grail’s Black Knight suffering from hypertension.

It’s important to mention the texture of Evil West’s violence up front because, ultimately, it’s what carries the entire game. The latest from Flying Wild Hog, the team behind the Shadow Warrior reboot series and Hard Reset, is set in a supernaturally inflected version of the 19th century westward conquest of the United States. A vampire conspiracy, we’re told during the opening, has existed in the nation “since the time of the Founding Fathers,” resisted by monster hunters belonging to an organization called the Reindeer Institute. A mythological take on historical settings can be a great way to portray the past. Unfortunately, Evil West, despite devoting a lot of time to its narrative, doesn’t seem all that interested in its story beyond the foundational premise of mixing a pulpy monster movie with a semi-passable Western.

It doesn’t help that protagonist Jesse Reintier, a blankly determined supercowboy decked out in a notched wide brim hat and layers of ornately patterned black leather, is a real dud. Jesse is forced to carry a lot of Evil West’s storytelling on his beefy shoulders, and he’s not quite equal to the task. He, along with the other members of the Reintier Institute (including its leader, Jesse’s gruff, horse-faced dad), are an uneven combination of deadly serious action heroes and quippy scamps. Their writers never seem quite sure whether the cast ought to be cracking jokes about the absurdity of their vampire-hunting mission or delivering straight-faced, dull exposure about it. (While exploring, Jesse will half-heartedly utter “moneyyy” at the sight of a bag of coins or “burnnn” when lighting giant spiderwebs on fire with a flamethrower. None of these limp jokes are nearly as funny as the fact that he has the words “RENTIER INSTITUTE” embossed on his gauntlet.)

Evil West’s violence is, ultimately, what carries the entire game

If the story leaned a bit further into the inherent camp of its premise, finding more joy in the ridiculousness of its dialogue and the dramatics of a plot about stopping a nefarious conspiracy led by an immortal little girl vampire, it’d offer a better time . As it is, Evil West’s half-baked attempt at a story — there are plenty of cutscenes and inter-mission levels that involve walking around a home base hub to pick up scraps of in-universe text — detracts from what the game does best: offer up a barrage of combat arenas populated by a variety of monsters seemingly delighted to be ripped, shot, and beaten apart by Jesse.

Jesse is surprisingly spry for a guy who pounds across sun-baked desert canyons, misty forest paths, and humid swampland like a forgotten Gears of War backbencher. He nimbly zips around the battlefield and launches himself at enemies like a stubbly cannonball — one of his abilities is, appropriately enough, named “Cannonball.” The deliberate weight of his movements carries over into the rhythms of Evil West’s shooting and punching, too. 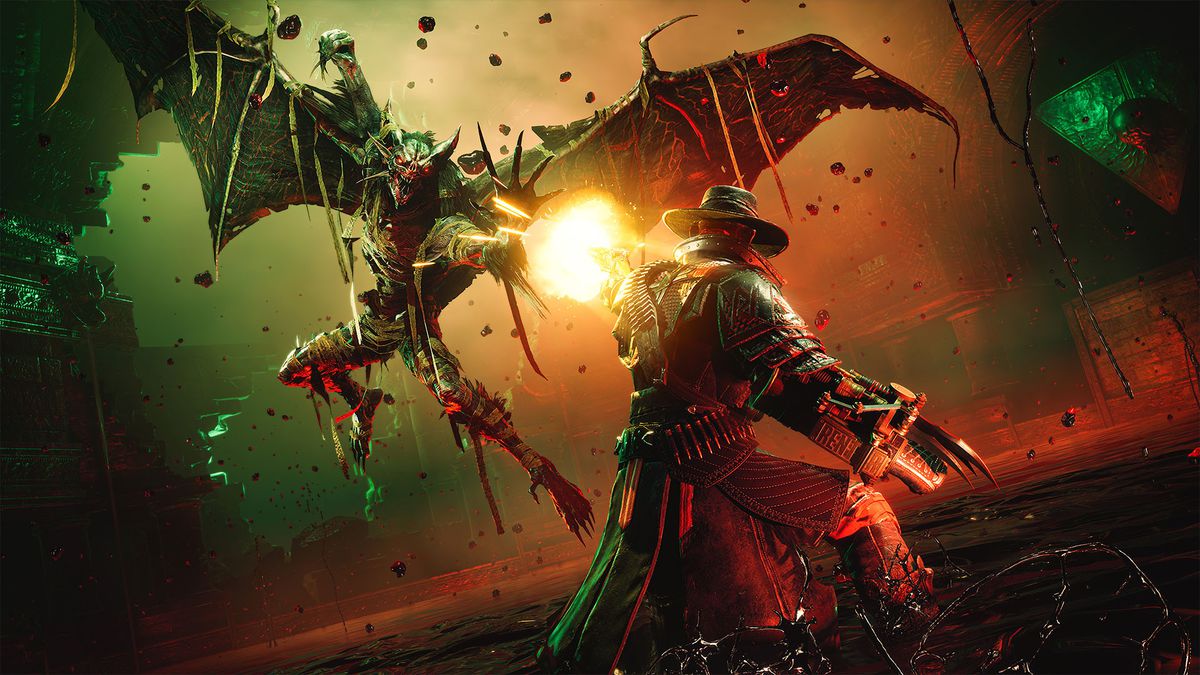 As Jesse traipses around America, he gains new weapons and upgrades from the institute’s engineers or as pick-ups in the field. The pacing is immaculate: Evil West’s gradually expanding loadout and ability set is never overwhelming and, as a result, encourages improvisational tactics that make full use of every weapon at Jesse’s disposal. In this sense, it’s not unlike the increasingly complex mix-and-match combat of the original Doom games and their rebooted sequels. To be clear, it’s completely possible to win most fights with a limited selection of weapons. But a field swarmed with flying, burrowing, charging, and exploding vampires is best cleared by making full use of Evil West’s arsenal of gruesome killing tools. Like the old adage goes, there’s a key for every lock; Jesse has a weapon suitable for opening up every monster.

As enjoyable as the combat is, though, it’s still disappointing that the only good way to interact with the assembly of vampire freaks in Evil West is by turning them into explosions of red goop. While there are bits of talk about the parasitic nature of America’s westward conquest, Evil West otherwise pays too little attention to the context of its late 19th-century American setting to extract anything vital from it. And this isn’t for lack of opportunities: The plot immediately places the leaders of its expansionist United States in conversation with literal vampiric monsters who thrive on sucking the life force from others. Despite a few feints in the direction of a general commentary on the brutality of its setting, the game never lingers long enough to make any viewpoint clear. 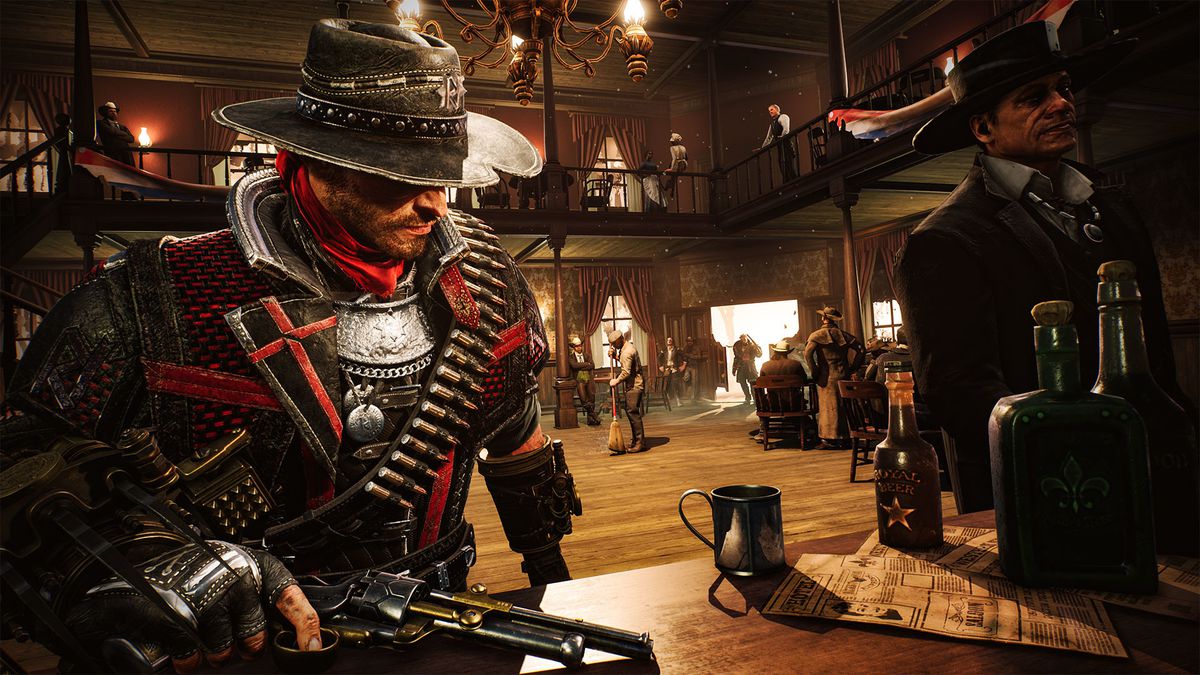 It falls even flatter when approaching specifics — take, for example, a menu description’s claim that a hulking species of vampire is “native to the Jenu Tribe of North America” when the reference seems, instead, meant to cite a creature from Mi’kmaq folklore called “Jenu.” Though the mistake likely stems from simple carelessness, it’s a pointed sign that Evil West’s creators weren’t as concerned with servicing the particulars of its setting as they were with using it as a kind of mood board for cutscenes and battle arenas.

Still, disregarding the downtime spent on its charmless characters and bland plot, there’s an undeniable thrill to the fighting. If only the rest of the game packed as memorable a punch as its protagonist does when beating the insides out of Evil West’s vampires, it would be easier to recommend. As it stands, it’s not much more than a series of better-than-average monster-pummeling arenas interrupted by uninspired storytelling.

Evil West will be released on Nov. 22 on PlayStation 4, PlayStation 5, Windows PC, Xbox One, and Xbox Series X. The game was reviewed on PC using a pre-release download code provided by Focus Entertainment. Vox Media has affiliate partnerships. These do not influence editorial content, though Vox Media may earn commissions for products purchased via affiliate links. You can find additional information about Polygon’s ethics policy here.

When Does Tower of Fantasy Release?

guides Published on March 15, 2022 Alex Gibson Home » Guides » When Does Tower of Fantasy Release? With its stylized aesthetic reminiscent of...
Read more
Nintendo

Nintendo of Europe has announced that it is kicking off a new eShop sale this week and it's titled the Spring into Action sale....
Read more
XBOX

Fortnite guide: Where to find Kamehameha and Nimbus Clouds

With the introduction of Goku and friends from Dragon Ball, Fortnite now has two new items: the Kamehameha and the Nimbus Cloud....
Read more
Nintendo

A brand new Season of the popular free-to play game Fortnite will be kicking off today making the start of Fortnite Chapter 3: Season...
Read more