I’m often left wishing developers would trade quantity for quality, and so I’m pleased to say Flying Wild Hog’s latest western follows that very blueprint with the Evil West. Rather than forging some enormous open world and cluttering it with shallow objectives, it is instead a linear affair that still manages to capture a sense of wonder and adventure. It stands as a fun throwback to simpler times as a result, even if it doesn’t quite stick the landing with everything it is trying to achieve.

Entering an alternate timeline where the Old West is now the Weird West, players step into the spurs of Jesse Reintier, one-part reckless gunslinger and one-part vampire hunter extraordinaire, who wields both firearms and sci-fi technology alike in the fight against the scourge of the vampires. As the son of William Rentier and would-be successor to the Rentier Institute, his name, as well as the world’s fate, weigh heavy on the shoulders of our hero.

Needless to say, things take a turn for the worse just a few chapters into Evil West, with the elder Reindeer getting gravely injured while the vampire conspiracy deepens. Despite his rebelliousness, the time for Jesse to rise to the occasion is now; thank goodness there are plenty of monsters and beasts to take things off his mind.

Core to the Evil West experience is combat, and this is where the game truly shines bright. Integrating both ranged and melee combat into an elegant ballet of blood and gore is the best way to survive the horrors that await, and there are plenty of tools at Reintier’s disposal to make that happen.

Perhaps the most important of them all is the Gauntlet, a combination of science-fiction and good old metalworking, this nifty piece of work allows players to chain together devastating melee blows, sending enemies flying into the sky for air combos or smashing them into smithereens. Add to that a variety of firearms, and you have an explosive package of fun that is quite adaptable to all situations.

Further progress opens things up more, and soon, you’ll be harnessing the powers of electricity, fire, and more to enhance your arsenal. With practice comes proficiency, and it won’t be too long before you are zapping around the arena and chaining together attacks like the renowned vampire hunter you are. However you choose to fight, Evil West wants to cater to aggressive, front-foot action, and it achieves that objective for the most part by keeping combat fast and removing the general need for fine aiming.

That said, the game still does a good job of keeping you on your toes, even if there are usually more sections with cannon-fodder enemies than I would have liked. From the dangerous wolf-like Nagals to the intimidating Highborns, the vampire bestiary will always pose a problem, especially when they are in a group. Even the human enemies you’ll encounter can cause a problem if you are not smart about exploiting weak points and keeping on the move. 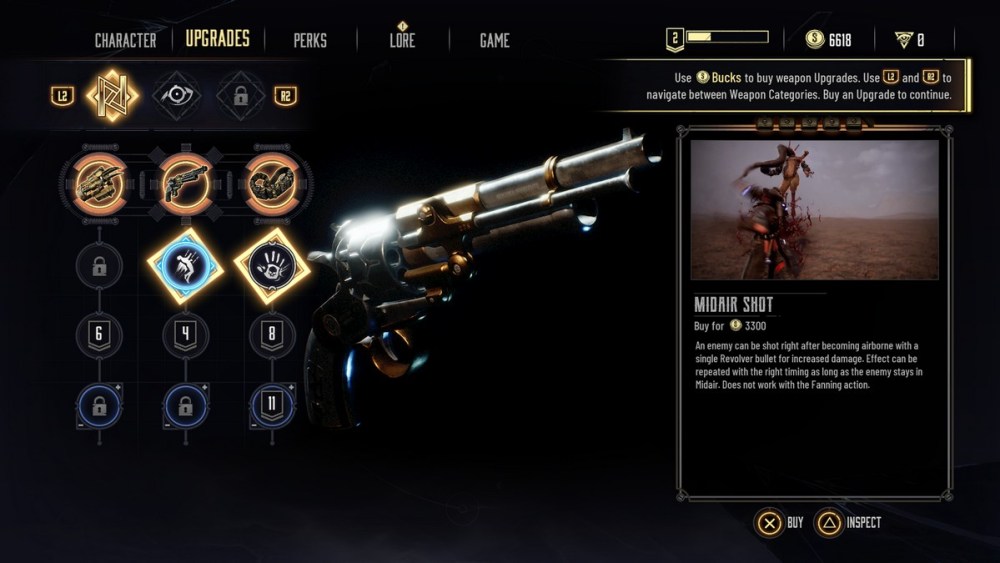 Dodging, blocking, and countering will become muscle memory, and that is important when the bosses are standing in your way. These entities are not to be trifled with, but with good foundations and monitoring of their patterns, they too shall fall prey to Jesse Reintier and his arsenal of vampire-hunting gear.

Success brings more XP, which also works into Evil West’s character progression and makes Jesse a more formidable presence out in the wild with new and powerful skills. Nothing feels quite as satisfying as uppercutting a goon, slamming it into the ground, and watching as every other enemy in the vicinity is punished fatally with area-of-effect damage.

Of course, Evil West is not just about throwing you into combat at every instance, with each level usually providing various environments in which players can explore in search of treasure and secrets. Evil West has a style of its own, and while it may not look that great on closer inspection, it works in motion. The sandy plains soon give way to some truly remarkable settings, further pulling players along in this bizarre rendition of familiar sights, even if it remains a linear experience without an open world as you might find in a game like Elden Ring. For anyone willing to venture off the beaten path, there are still many rewards awaiting.

Those rewards come in the form of more Bucks, the currency that is used to upgrade your equipment with even more helpful enhancements, to unlocking more powerful Perks and Skins that can be used to customize your vampire hunter. Obviously, the more you can call upon, the better prepared you will be in this fight, so it is always a good reason to scan your surroundings before making your way to the next objective. 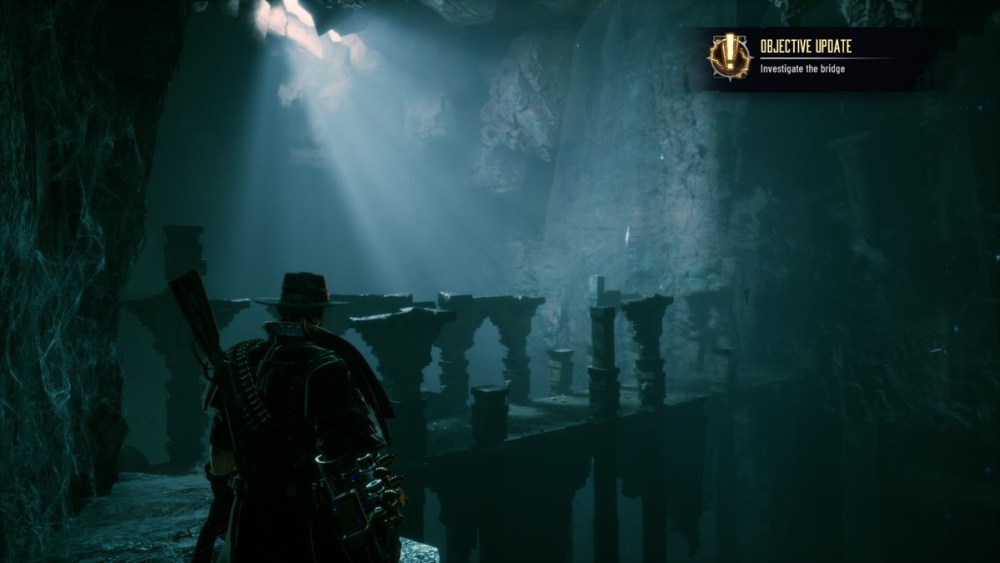 While Evil West offers 16 missions of varying lengths and excitement, it is not without some niggling issues. Narratively, the writing is not exactly the cream of the crop, but it does suit the action-heavy emphasis that the game is trying to deliver. Exposition is usually delivered in cutscenes, but the transition from action to story and back again can be jarring, so be prepared to move once conversations come to an end.

Also, the game includes some sections in hub areas before missions, which tends to slow things down and serve no purpose other than rewarding the curious player with more lore and currency pickups. Just playing the cutscenes would save players plenty of time from walking to and fro.

As for technical performance, it rarely falters, even in the most hectic of moments, but there were a few occasions of freezing and a crash or two throughout my 12 hours of play. There were also some visual defects when the camera is moved too swiftly, while the hose of my Scorcher refuse to materialize into being even if everything was working perfectly. Balancing can also be improved, with the latter parts of Evil West unleashing large groups of enemies that can prove daunting even to the most seasoned of hunters. It is one thing to be challenging, and another to stack the cards so firmly in the enemy’s favor.

Despite these issues, Evil West will most certainly become a better experience with some fine-tuning and a patch or two. As far as I am concerned, its core formula is an entertaining one, bringing players on a linear ride into the wild west and unleashing the darkness of vampires for good measure. For those seeking a pleasant time of vanquishing evil for 10-15 hours using your fists and guns without the stress of needing to do too much, Evil West should be firmly in your sights as your next call of adventure. 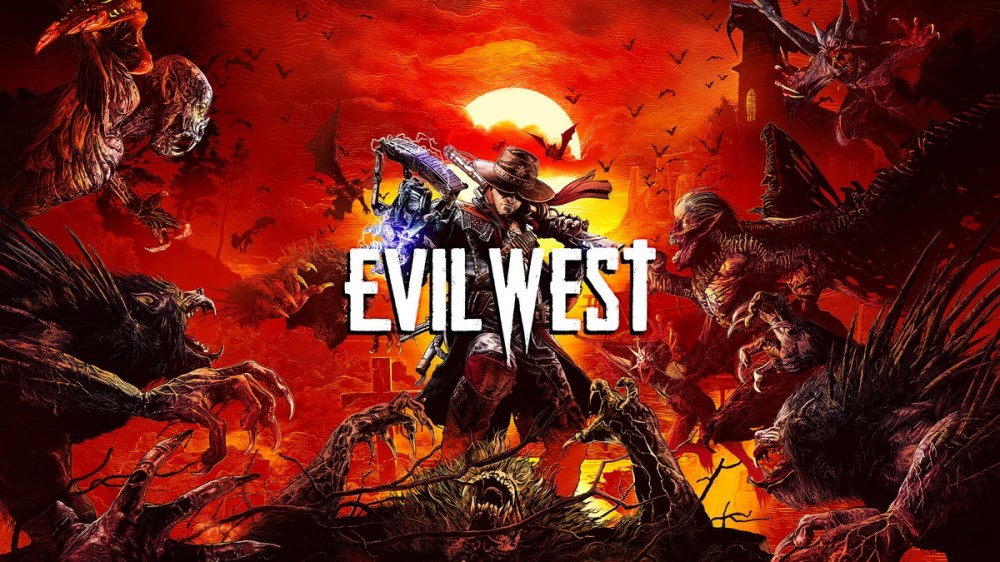 How to Level up & How it Works