The Elite Eight SBC in FIFA 23 is quite specific.

Home » Guides » How to Complete Elite Eight SBC in FIFA 23

Advanced SBCs remain in FIFA 23, giving players the opportunity to earn big rewards relatively early on in their FUT journey. Some can be trickier than others, however. That’s why we’re here to break down just how to complete the Elite Eight SBC in FIFA 23. 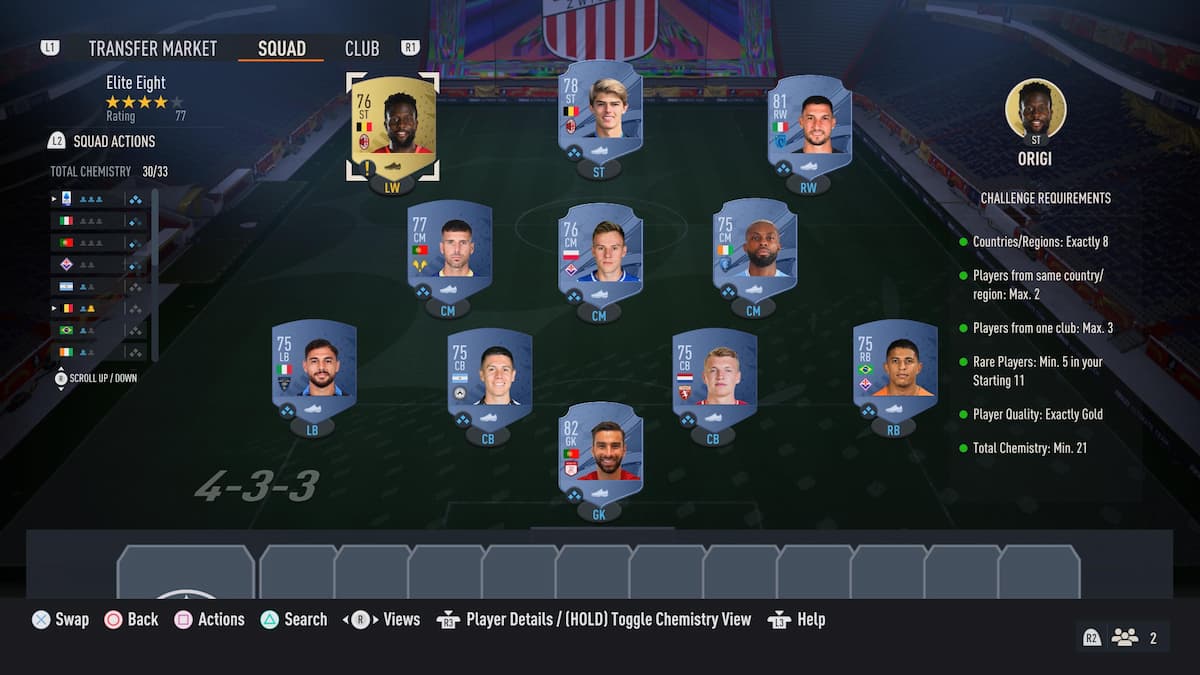 With those requirements in mind, it’s time to find a solution. And fortunately, there’s a cost-effective one to be had. Again, with this particular SBC, you cannot heavily rely on just one nation to build your base. It will take the right blend to make this work, but you can still heavily feature one league if you so choose.

I’ve been having great success using Serie A as a base for these, and the Elite Eight SBC is no exception. You’re going to want to double up on nations three times—I opted for Belgium, Portugal, and Italy—and put together a squad for roughly 6,500 coins.

One crucial aspect to remember is that this build does require five rare golds, so be sure to designate your goalkeeper as one of the rare players. Despite its rarity, a lot of goalkeepers in the low 80s can be had for relatively cheap—and certainly for under 1,000 coins if you’re looking carefully.

Additionally, because the Chemistry requirement is so low on this one, you can stick Origi’s original ST card at LW and not suffer because of it—it only reduces the Chemistry of your squad to 30/33, which is more than enough.

And that’s all players need to know in order to complete the Elite Eight SBC in FIFA 23. The rewards are untradeable this time around, but it’s not too big of an investment either way. For more information on FIFA 23, check out our other guides covering whether or not Liga MX is included and how to change difficulty—not to mention the endless content below.

The Star Wars universe has consistently launched multiple projects and spin-offs to showcase new galactic adventures. So, if you're wondering what will come...
Read more
Games

World of Warcraft fans celebrate their favorite fact with #MightofNightElves

Night Elves have been part of the Warcraft universe since Warcraft 3, and they're the source of all elf-kind. They're one...
Read more
Nintendo

Nintendo has released a Japanese overview video for the long-awaited next entry in the Mario Strikers franchise which is titled, Mario Strikers: Battle League....
Read more
XBOX

News Atlus has released another of its daily trailers focusing on the many demons of its upcoming JRPG Soul Hackers 2. Published on May 22, 2022...
Read more