PGA Tour 2K23 will introduce new player progression elements, for both career mode and online play, when 2K Sports’ golf simulation launches next month. Combined with other changes to the game’s popular MyCareer mode, HB Studios is offering both a deeper, more RPG-like experience for both online and solo-playing golfers, and one more consistent with career modes seen in other licensed sports titles.

Big picture, playing in both online and career modes will earn players skill points, which they can apply on a club-by-club basis to level up their performance. Players will max out at 50 skill points, however. With 14 clubs in their bag, they’ll effectively have to create a character build that either enhances their strengths or covers up their weaknesses, Shaun West, the game’s producer, said in a media event last week. Players will start their build by selecting one of five archetypes — specializing in driving, putting, short game, and the like — and then they can further develop their character with the new skills system.

“The skills have three levels each, so you won’t be able to unlock everything,” West said, “and you’ll have to choose wisely based on how you’re playing, and what clubs are set up in your golf bag .”

Club skills will be supplemented by “fittings,” which for non-golfers means changing a club’s head, shaft, or grip. These also enhance a player’s performance with that club. The items can be earned after completing ordinary rounds, beating a designated rival golfer, or advancing through the Clubhouse Pass (basically a battle pass-style season of content offerings). Players may also acquire sleeves of golf balls (although their use is infinite) that perform differently — longer drives, softer landings, etc. — to further customize or enhance their playing style.

Career mode golfers in PGA Tour 2K23 will construct an RPG-like build to enhance their playing style, and use club fittings and skills to further tune their game or cover for weak spots. Image: HB Studios/2K Sports

Worrisome, however, is the fact these fittings and balls are unlocked with Virtual Currency, which as NBA 2K players know may be bought for real cash. While that doesn’t mean a player’s attribute progression may be bought directly, as in NBA 2K23, it does introduce a pay-to-win element to PGA Tour 2K23, particularly as these fittings are used in online play.

West said PGA Tour 2K23 will launch with a new in-game shop where “some items are available for VC purchase that are timed, or featured for certain periods of time.” He emphasized, however, that Virtual Currency is also earned through ordinary play. Still, that doesn’t change the fact some players can skip all of that and buy the VC outright and use it in the shop.

That said, “All of the attributes, all the fittings, all the ball sleeves, are set up in a […] horizontally balanced way,” said Jordan Ault, the lead gameplay designer, last week. “Every bonus that comes with any one of these things will also have a tradeoff that goes with it. As you unlock new fittings, or receive more ball sleeves, you’re going to see pluses and minuses for each one. It’s up to you to decide which one of these things fits your personal play style — or is there a scenario where ‘I’m playing this course, so I’m going to try to change which fittings or which ball I use, to best serve me in that context?”

Elsewhere in career mode, HB’s designers noted that there will be three additional licensed, real-world courses in the game at launch, for a total of 20. Another 12 fictional courses from the 2K Next course-designing community will help round out a full career year. If players choose to begin in the PGA Tour’s qualifying school, move to the Korn Ferry development tour, and then graduate to the full PGA Tour, they’ll see 34 different events. 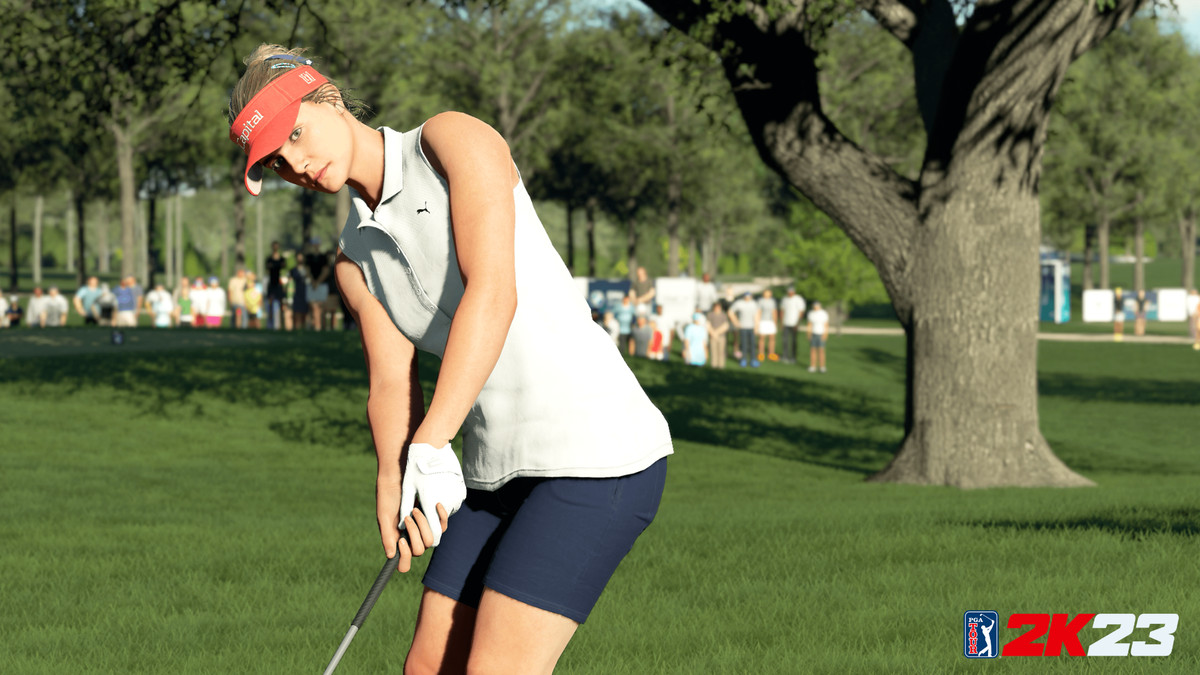 The LPGA’s Lexi Thompson returns to the roster of real-life golfers that players may face, or play as, in PGA Tour 2K23 Image: HB Studios/2K Sports

Further, for licensed or created courses added to the official lineup post-launch (Pebble Beach, neighboring Spyglass Hill, and San Diego’s Torrey Pines have been mentioned), players may use a feature new to PGA Tour 2K23 that allows them to change the venue of any tour event. They can only use courses that are officially part of the main roster, but “you’ll be able to use that feature to swap those in for an event in your next season, if you’d like,” West said.

PGA Tour 2K23 players will also see more real-world golfers licensed to appear in the game and, players should end a tournament tied with one, there will be a sudden-death tiebreaker. Players won’t see the shots of their opponent — those will be background simulated — but it at least provides an extra step in realism. There will also be a slew of real-life golf equipment and apparel brands providing sponsorship opportunities in MyCareer, with attendant benefits to the rounds players put in with those logos.

Call of Duty: Modern Warfare 2 officially launches on Oct. 28, but players who pre-order the game (digitally, that is) will...
Read more
Games

I've always loved how this building looks.Image: 株式会社 Plan・Do・See マーケティング室When it was announced that Nintendo's former headquarters was going to be turned into a...
Read more
Games