Sometimes, it can be clear how some games are positioned to kick off a franchise, with a big budget and a huge marketing push to set things up for success. Other times, a surprise indie hit can make it big with creative gameplay, a good story, eye-catching visuals, or a combination of everything. The latter is certainly what developers Draw Distance hit upon with 2017’s Serial Cleaner, and its sequel, Serial Cleaners, is another step in the right direction to cleaning up well as a stealth-action game.

Bringing back Bob from the first game and mixing him up with three other cleaners in the form of Psycho, Lati, and Vip3r, Serial Cleaners makes the jump from the 1970s to New York City in the ’90s as the series moves ahead not just narratively , but also in terms of its gameplay mechanics.

As the name suggests, the game’s premise revolves around cleaning, but of the crime scene variety. Every time the mob leaves a mess behind, it is up to one of the four unique cleaners to ensure that nothing is left to law enforcement, be it bodies or evidence, and that the place is largely free of blood.

One level could have you ripping up bodies with a chainsaw as Psycho; another might have you cleaning up a sitcom set where things went horribly wrong as Lati. Either way, the same rules apply – avoid the cops, clean up the blood, get rid of evidence big and small, and make sure nobody sees the bodies. Thanks to the open-ended map design of each level in Serial Cleaners, full of exciting and sometimes weird settings, nothing ever feels quite the same, even if the underlying mechanics remain intact.

This is due mainly to the unique abilities that characters bring to the proceedings, taking full advantage of the intricacies of map designs, and helping to keep the gameplay dynamic and fresh depending on how you choose to approach things.

A Vip3r level is full of opportunities to hack into mechanical systems like lights and doors to mess with the authorities. Lati, on the other hand, is both strong and fast, allowing her to navigate around the world more efficiently, and she is easily one of my favorite cleaners to count on. As for Bob, the OG cleaner is much more adept at wrapping up bodies and leaving things neat and clean, while Psycho’s lumbering nature is balanced by his ability to chainsaw up bodies and obstacles alike, and using severed limbs to knock out guards that can be then be locked away saves you trouble down the line. 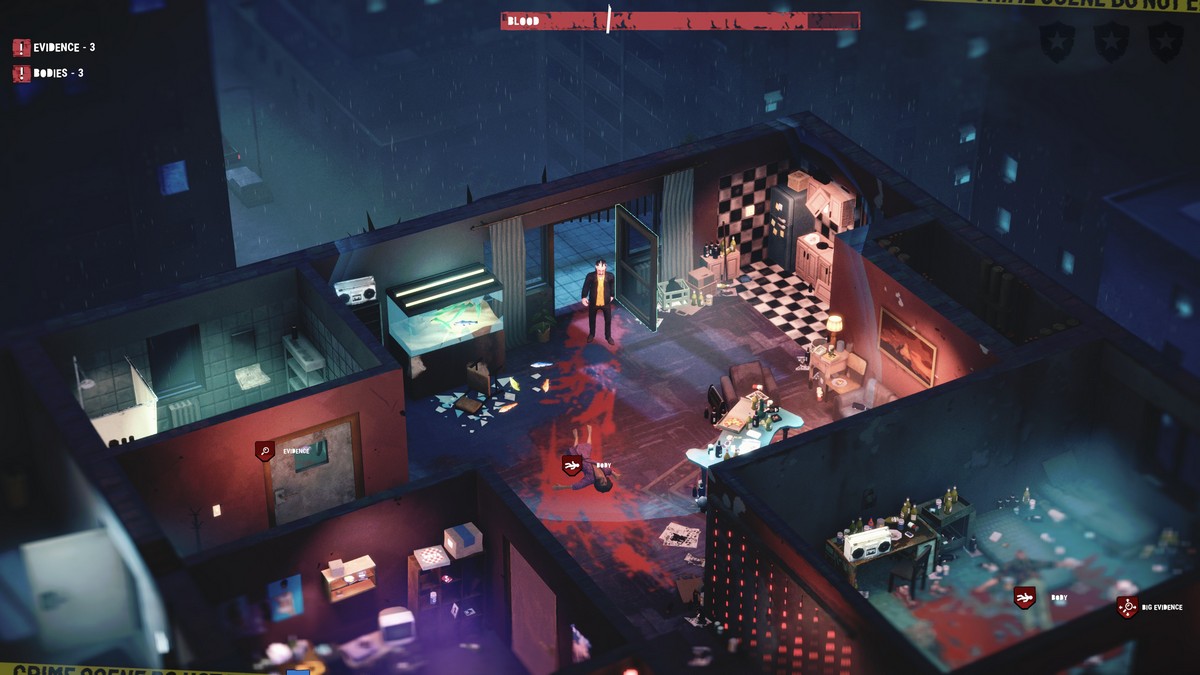 Certain levels also allow players to switch between cleaners, catering to all sorts of play styles and approaches, which is a fun twist on things and encourages experimentation even if there are interactions much more suited to one than the other.

Once you have understood the limitations of the world of Serial Cleaners, like Vip3r being only able to drag bodies and that destroying obstacles using a noisy chainsaw attracts unwanted attention, your efficiency at completing levels will only increase. And you will need that later, as the map gets more complicated, more enemies roam about, and the tension gets ratcheted up to differentiate the best cleaners from the rest of the competition.

All of the action is wrapped up in a narrative that sees the group coming together and remembering about their past jobs, allowing for a non-linear story to unfold as players pick dialogue choices, whose adventures they want to relive first, and unraveling more of the mysteries behind each of the four cleaners and where they find themselves presently. No spoilers here, but it is a tale worth pursuing all the way to the end, especially with the multiple endings that are born out of your choices and consequences. 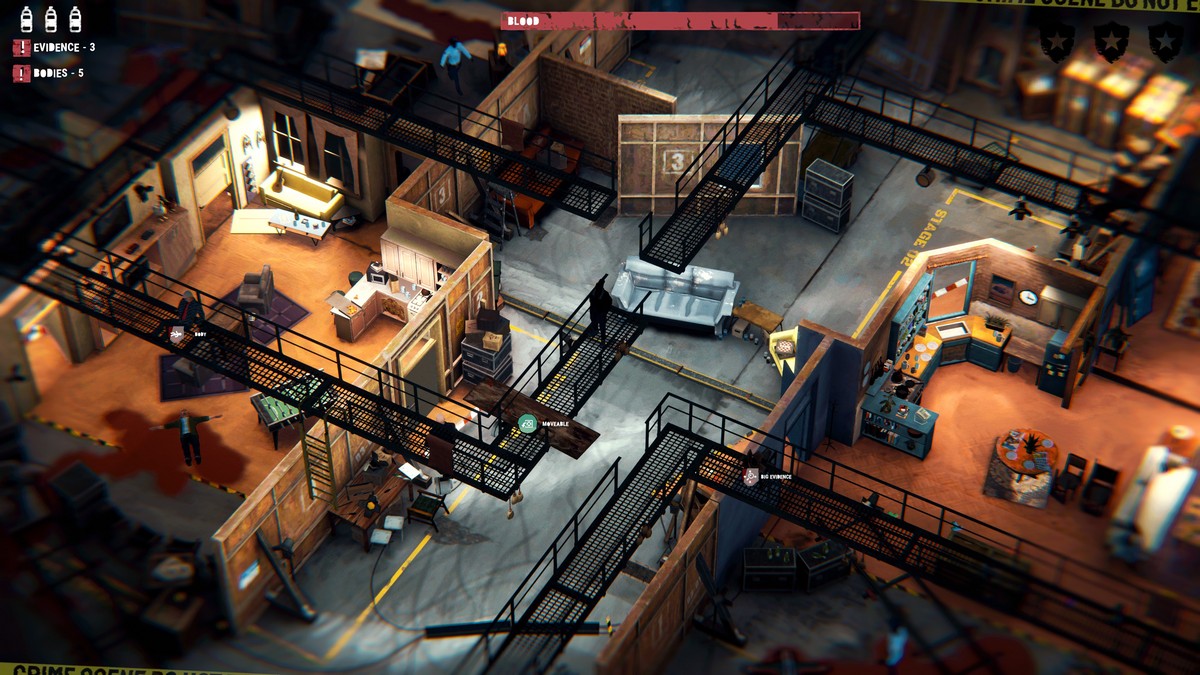 On the visual and audio side of things, the look of Serial Cleaners stands out, and for good reason. Much of the art direction is derived from street art and post-modernism, and together with the ways colors are used; it all works towards drawing the player into this world where nothing is quite as it seems. Pair it off with the banging soundtrack that puts you right in the mood for some stealth-based cleaning, and you are in for a good time.

While the game is all about keeping things spick and span, there are still certain issues that will impact your enjoyment of Serial Cleaners. The top-down view, for one, does have its merits in allowing players to see more of the world, but objects can obstruct the view of essential objects or blood trails. Sure, you can utilize Cleaner Sense to highlight such stuff, but perhaps being able to rotate your perspective can make things smoother.

Also, while some may argue the lack of vision cones and the like make for a more pure stealth experience, it can be a hit-or-miss experience when it comes to being successfully hidden or partially exposed to cameras and guards. The AI ​​can also be easily exploited whenever your cover is blown, as running around corners and crouching down can make them lose interest surprisingly quickly, and kind of ruins the fun involved. There are also graphical and technical issues that may require level restarts, but those will no doubt get fixed in future patches. 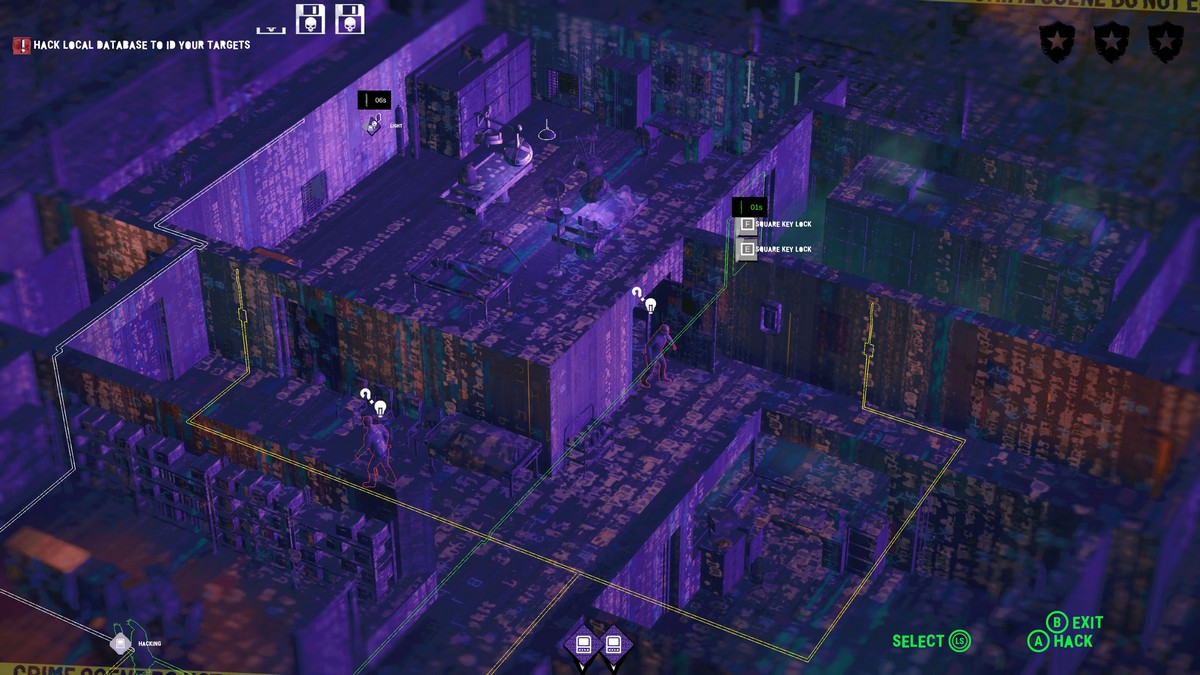 As a stealth-action experience, Serial Cleaners is most certainly a breath of fresh air, continuing to build on the foundations set by the series’ first outing in 2017. Between the added uniqueness of the rest of the crew, the diverse and interesting level designs, the non-linear story with freedom of choice, and just good old cleaning action to be had, Serial Cleaners is everything you would want in a sequel; just be wary that some polishing is still needed for the perfect finish. 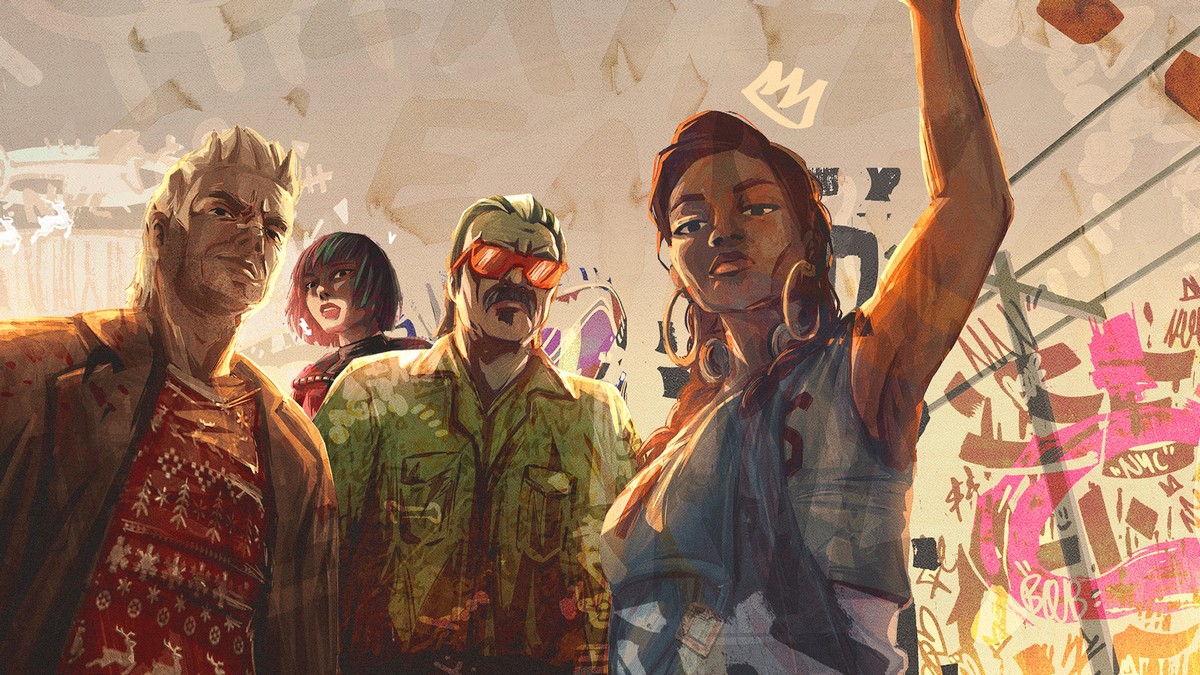 What a strange year it’s been. Whether because of shifting release calendars, less reliance on the retail sphere, or delays from the COVID-19...
Read more
Nintendo

Believe it or not, it had been announced in 2015 that Freedom Planet 2 was in development. In fact, it had been confirmed...
Read more
Nintendo

By now, you're probably aware about Capcom Fighting Collection. Capcom had announced it earlier this year, in February. The game is a...
Read more
Games

In the gameplay segment, you'll get a chance to see Ryu, Jamie, Chun-Li, and Luke in action. Get a glimpse of some of...
Read more