Are you searching for the best armor sets in Elden Ring? In this RPG game, upgrading your armaments using Elden Ring smithing stones and Ashes of War is just as important as leveling up your character. Elden Ring armor, however, tends to be overlooked by comparison—many players spend several hours wearing the same equipment. Unlike in real life, however, not changing your clothes for days at a time is somewhat understandable in Elden Ring, as impressive gear is difficult to come by – particularly in comparison to other methods of upgrading your build, like Elden Ring talismans.

the best Elden Ring armor is far from useless, however. There are some armor sets out there which come with powerful abilities, though their usefulness largely depends on what type of character you’re building towards. If you’ve got a fashion-conscious Tarnished, Elden Ring makes it difficult to find armor that is both protective and stylish, but it certainly can be done if you know where to look.

There are three ways to earn armor sets in Elden Ring: repeatedly kill the same enemies until they drop their entire set, kill a specific enemy to earn all of their items, or find the equipment in a hidden chest. Here’s everything you need to know about the best Elden Ring armor sets, including where to find them and what bonuses they provide.

When it comes to picking stylish armor sets, you’ll struggle to find anything as elegant as the Twinned Set. The medium weight armor set features a pair of gold and silver twins wrapped around each other to form a beautiful piece. The easiest way to acquire this set is to kill D Hunter at the beginning of the game—you can find him near the first Site of Grace in Limgrave.

Killing D Hunter is the easiest way, but not the best – we recommend completing Fia’s Elden Ring quest line to receive the Twinned Set as a reward. If you’ve killed D Hunter and want to complete Fia’s quest, you have to seek forgiveness at the Church of Vows. Atoning for your sins brings D Hunter back to life, giving you another chance to complete Fia’s quest. 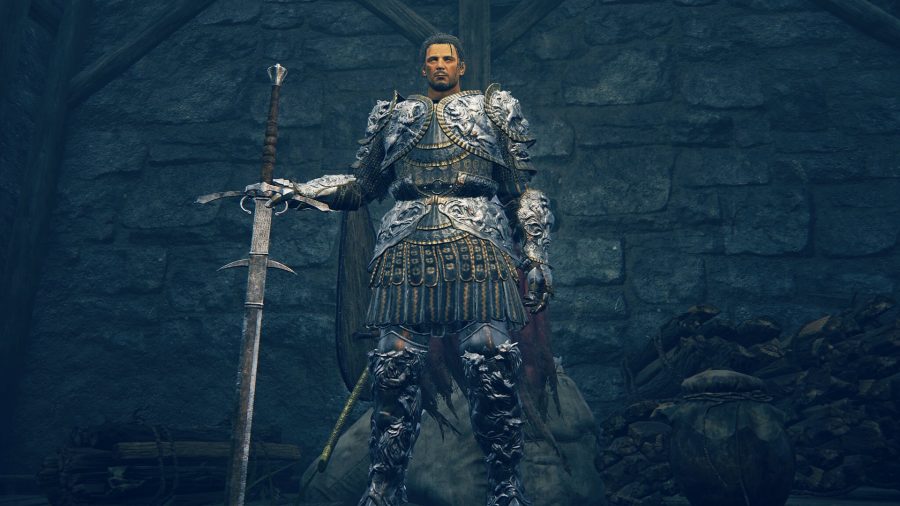 Just like D’s Twinned armor set, you can obtain the Beast Champion set at the beginning of the game at the expense of a quest line later on. Bernahl is the NPC wearing the armor – he can be found at the Warmaster’s Shack Site of Graceright between the Stormhill Shack and Saintsbridge.

You can acquire Bernahl’s full armor set, along with the Devourer’s sceptre. At this early stage in the game, you might find the Beast Champion set to be too heavy – be sure to put a lot of stats into endurance if you want to be able to roll normally.

The Cleanrot armor is tricky to acquire as each piece of the set is dropped by a specific enemy; this means you must fight against the same enemies repeatedly until you have all of the items. Head to the Aeonia Swamp in Caelid to find the Cleanrot Knights. This enemy isn’t particularly difficult to kill, but there’s plenty of swampy areas that can induce the Scarlet Rot status effect if you aren’t careful. You can increase your odds of discovering items by using a Silver Pickled Fowl Footor by equipping the Silver Scarab talisman and the Silver Tear Mask helmet. 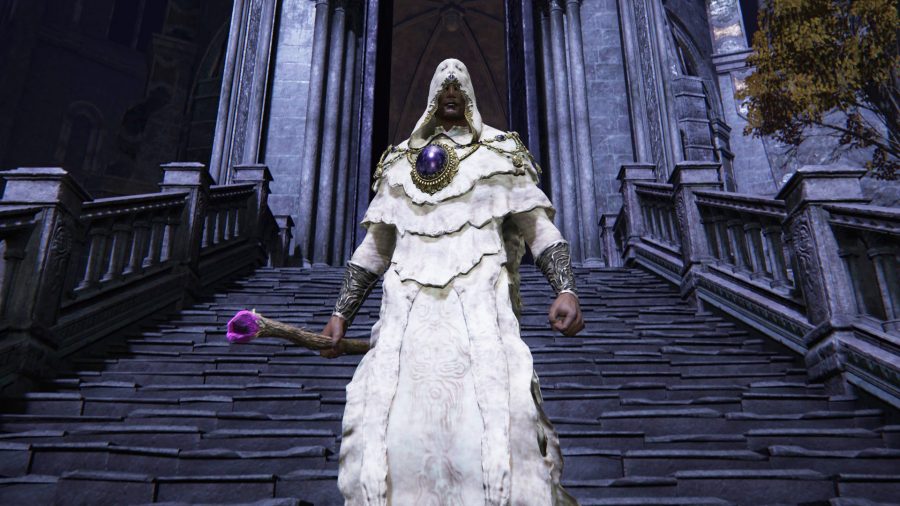 Want to show off your high faith build with Gandalf-like attire? There are two variations of the Godskin Noble armor set: a slimmer version of the robes can be found in the Caelid Elden Ring Divine Towerand a larger set can be easily acquired by heading to the bridge towards the Divine Tower of Liurnia. 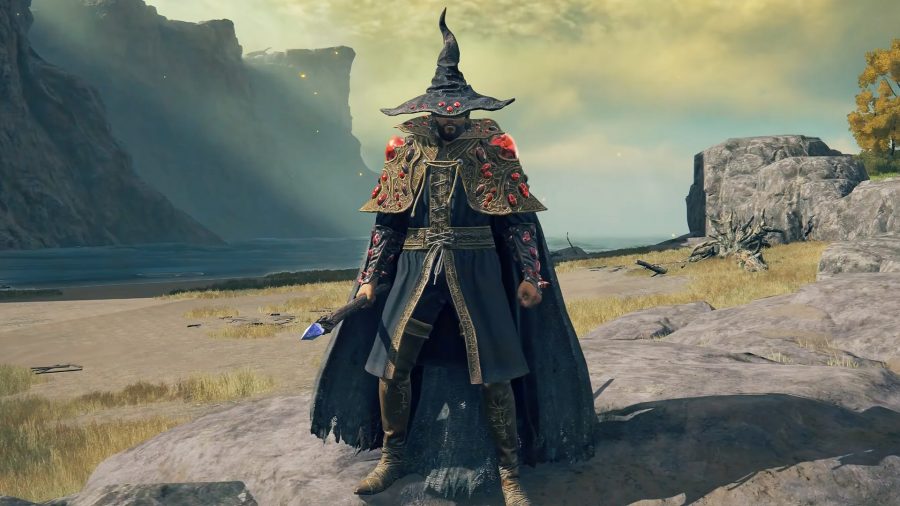 Alberich’s lightweight armor set has been designed for mages, featuring red glintstones across the hat, robe, and bracers. This equipment also has a set bonus, increasing the damage of blood sorceries by almost 20%. Bear in mind that there are only two blood spells in the entire game, but that doesn’t matter because this set looks fantastic.

To find Alberich’s armor set, travel to the West Capital Rampart Site of Grace. Head down the stairs and turn left, descending down to the ground level as you face a large church. Enter the church and find the corpse at the end of the room, loot it to acquire this unique armor set. 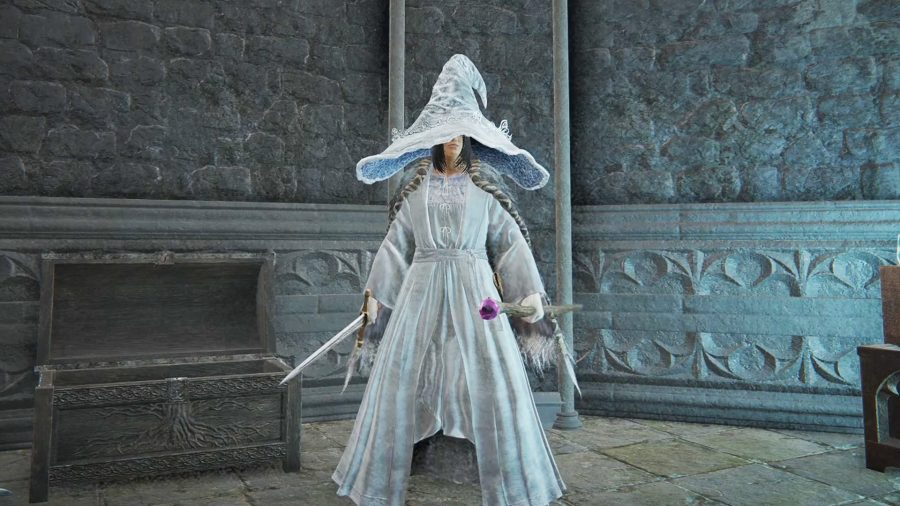 The Snow Witch armor is the hardest to find on this list, but it looks great and provides a set bonus which boosts the damage of frost spells. You need to complete a large portion of Ranni’s quest, up until the point where you find the Cursemark of Death. This item allows you to travel to Renna’s Rise – head to the upper floor of this tower to find a chest at the back of the elevator room. The chest contains the Snow Witch hat, robe, and skirt, giving you the option to select your favorite bracers to pair with this armor set. 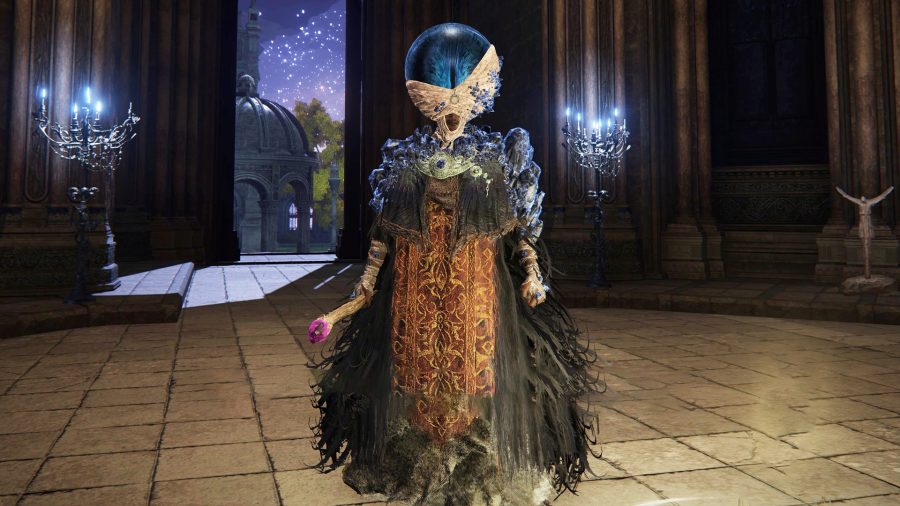 To become the ultimate mage, you need the right set of clothes to make your sorceries pop. There are two exclusive armor sets that can only be obtained by completing Sellen’s quest line. We highly recommend checking out LunarGaming’s guide on YouTube as he breaks down all the steps needed to complete the quest.

It’s worth pointing out that this quest cannot be completed without giving Sellen at least one spell scroll. If you give your scrolls to Miriel, Pastor of Vows at the Church of Vows, Sellen won’t trust you enough to go on this important quest. The final step of Sellen’s quest asks you to side with her or Witch-Hunter Jerren – if you side with Jerren, you lose access to both armor sets, so make sure you pick Sellen. Once Sellen has been transformed into a boulder, travel back to Lusat in Sellia Hideaway to find his full armor set. 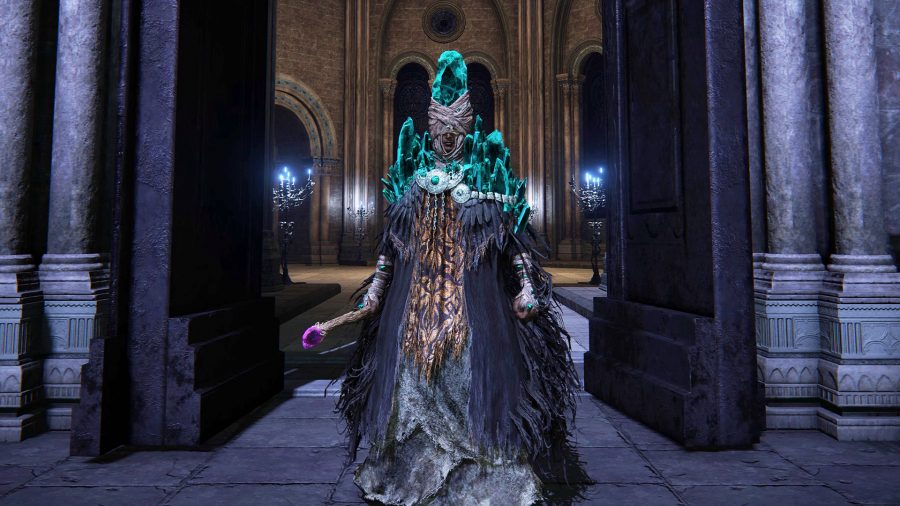 Primeval Sorcerer Azur doesn’t talk to you when you meet him in Mt. Gelmir, but he rewards you with Comet Azur, one of the best spells in the entire game. If you complete Sellen’s quest, he’ll disappear entirely leaving behind the drippiest armor set in Elden Ring. meet with Sorceress Sellen inside the Waypoint Ruins in Limgrave to start this quest line. Once the quest is complete, travel back to azure in Mt Gelmir to find his armor.

Those are the best armor sets in Elden Ring. Once you’ve picked out a great outfit, it’s time to go crush some Elden Ring bosses. If you need a hand in battle, definitely check out our best Elden Ring summons and spirit ash locations guide to call for some help. To complete your armor set, you should find out what the best Elden Ring weapons are to create the perfect character.

Tekken’s history started under the name Kamui in 1994

Before it was Tekken, Namco's marquee fighting franchise went by the name Kamui, and a new video showcases the origins of how...
Read more
Videos

Is It FASTER to Download Nintendo Switch Games in Sleep Mode?

Is there a trick involving Sleep Mode to download Nintendo Switch games even faster? We test it in this in-depth comparison to ... source
Read more
PC Gaming

Lost Ark's May update will give western players their first glimpse of a legion raid. While the...
Read more
Playstation

news Sega is about to release the story expansion DLC for Lost Judgment titled “The Kaito Files,” and they just launched a new trailer. Published...
Read more