Last year’s MLB The Show finally found a switch in my brain and flicked it on. For more than a decade, I played the single-player Road to the Show career almost exclusively, and as a pitcher, at that. Last year, RTTS’ brilliantly executed two-way player story, along with the freedom to bring that star to the Diamond Dynasty mode, opened up a world of gameplay and content that I had previously neglected.

Thus, it took much longer than the typical review period to understand MLB The Show 21’s best qualities last year, particularly pinpoint pitching — which finally clicked for me after a teeth-gritting couple of weeks in which I forced myself to adapt to the new control scheme. I’m not sure I’ll reach a similar revelatory point in MLB 2022, where everything just clicks, but it looks like it will at least be occupying a good chunk of my time; even if its two biggest modes — Road to the Show and Diamond Dynasty — are largely the same.

A good candidate for breakout feature is March to October, which debuted in 2019 as a half-hearted, lite-mode franchise. SIE San Diego Studio has grappled, for years, with the fact that baseball’s 162-game season simply overwhelms most video game players, no matter their appetite for the sport. March to October, by playing only key moments of key games over a single season (the current real-world one) has been an attempt to address that.

The problem is that a single-season campaign effectively made March to October a win-now mode. If your favorite team was the Pirates, the Mariners, or some other forever-rebuilding club, they really weren’t viable for this mode, even if weaker clubs face less seasonal goals in the mode’s win conditions. By introducing a multi-season format to March to October, MLB The Show 22 now gives a little more meaning to picking a club where win-loss expectations are a lot lower. Multiple seasons, of course, feather in more player management to put some real meat on MTO’s bones.

One of the ways it does this is by narrowing the player’s offseason focus to scouting three free agents that might be a good fit. Players can establish their offseason priorities in a checklist addressing the club’s specific needs (a left-handed bat, or a table-setter who gets on base a lot), and then the game tells them what needs each free agent fits. Full-fat franchise modes in The Show and other sports titles have seen me filling up notebooks and spreadsheets outside of the game as I try to rebuild a team, before giving up on the time sink and going back to the single-player career.

Other sports titles would do well to emulate March to October’s high-level approach to a weedy phase of career modes.

March to October’s free agency management is a great example of how to present information that leads to informed, satisfying choices, without overwhelming the user. And the multi-season approach, with player management added, gives March to October a jolt of context and storyline intrigue that the single-season mode struggled to create. Other sports titles would do well to emulate March to October’s high-level approach to a weedy phase of career modes.

The bridge opportunity with March to October — similar to how Road to the Show brought me deep into Diamond Dynasty last year — is that players at the end of a season always have the option of transitioning that save to Franchise mode, and the fuller experience it offers. But MLB The Show 22 is now the second game in the series to not allow players to import saves from previous games. And it’s easy to see why: With player progression and attributes in Road to the Show now tied to equipment loadouts and specific perks — those perks being among the many things that can be sold for virtual currency in Diamond Dynasty’s marketplace — SIE San Diego needs you to start over every year, just like in NBA 2K’s MyCareer.

I deactivated my MLB The Show 21 perks and equipment, and my base attributes were topping out at mid-60 (out of 100) for a player with two years in the pros. Bringing that guy forward to The Show 22, without his items, would be pointless. If The Show 22 let players carry over their items, that means players would need fewer items that require virtual to acquire. But in this scenario, someone could also dump all of their year-old gear on the marketplace and start RTTS over anyway, warping that economy and putting their virtual cash toward Diamond Dynasty. 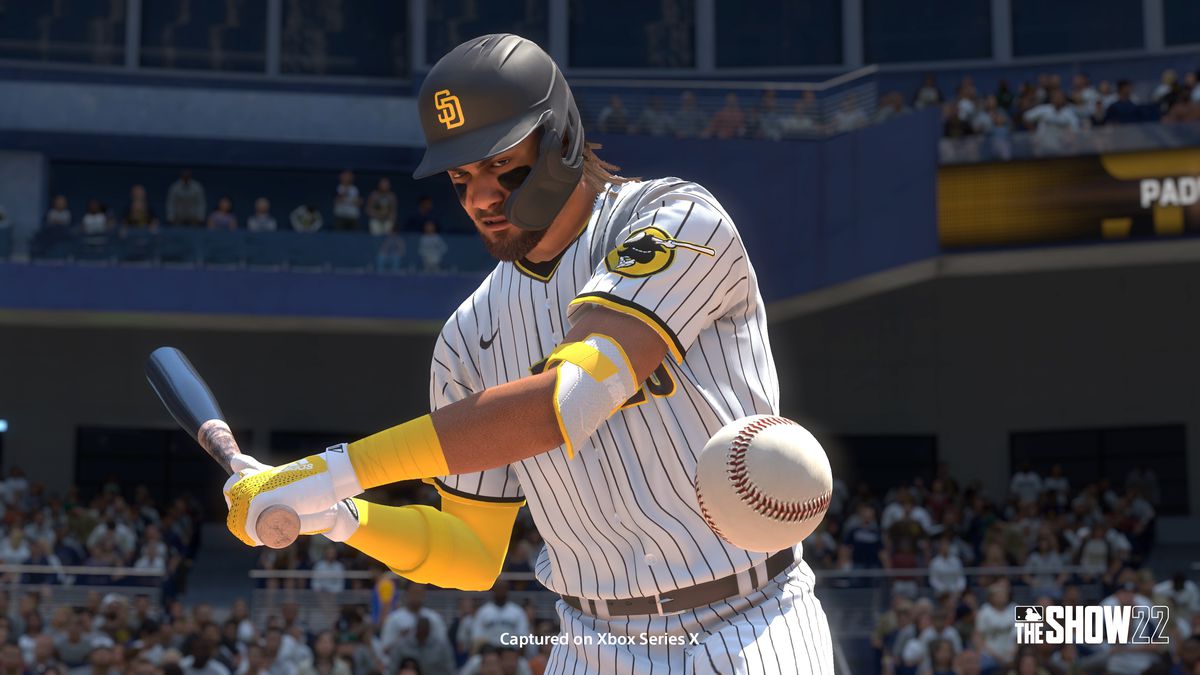 Diamond Dynasty is, make no mistake, a cash spigot for Sony. What is a more natural sell in a card-collecting game than baseball cards, after all? To be fair, Diamond Dynasty still offers a lot of great cards that can be acquired, battle-pass style, by completing certain cumulative objectives. I have spent money in Diamond Dynasty, and I’m not proud of it. But because of its structure and marketplace, I have also unpacked a diamond-rated card with freely earned currency, flipped it on the market, and bought world-class gear for my RTTS player, completely rewriting the story of his rookie season. He went from a steady-performing prospect to a generational talent with overnight power — something that wasn’t really possible under the grind structure RTTS used to have. I doubt I was the only one, last year, who funded his player’s development with gains from Diamond Dynasty.

Diamond Dynasty, and Road to the Show gear, are worthwhile grinds because the gameplay itself is, year to year, still the most balanced and understandable of the major sports. This is critical to baseball, which is famously a sport of failure. Last year, my personal observation/grudge was that fields were way too efficient in taking their routes to a fly ball. Shots into the gap would die in a center fielder’s glove, with the game’s presentation always saying (in that pseudo-science, advanced-metrics way) he had taken 100% “route efficiency” to run it down. Something feels different this year.

Obviously, the game’s broadcast isn’t going to highlight route efficiency on a ball that isn’t caught, so I have no way of telling for sure. But either my drives are not hanging in the air as agonizingly long, or average players are actually fielding the ball like average players, without going so far as to make an error. This can be a pain in the ass when you’re a pitcher in double-A, but it’s a relief to anyone prioritizing speed and making contact in their second baseman’s build.

Finally, MLB The Show 22’s most noticeable change is in its commentary, which thanked Matt Vasgersian for 15 years of an enjoyable call and brought in Boog Sciambi (of the Chicago Cubs) and Chris Singleton of ESPN Radio. It’s not exactly a breath of fresh air, as MLB The Show 22’s commentary is still prone to repetition, making that apparent within your first two or three games. This is especially true if you have a created player, or if you’re playing with someone whose name is not in the commentary engine. But Singleton and Sciambi are still a comfortable listen, with a minimalist call that doesn’t try to enforce banter or dwell on incremental developments. Their dialogue library needs a lot more depth, but for what they’ve been asked to say so far, they do the job well.

Like the sport it portrays, MLB The Show 22 will take a very long season to show me its real virtues. But the short-term successes I’ve already had make it enticing to see that season through to the end. I am sure that repeated commentary, red animations, and inexplicable simulation results will nag at me come September. I’m also sure that I will still be playing this game in October.

MLB The Show 22 launched April 5 on Nintendo Switch, PlayStation 4, PlayStation 5, Xbox One, and Xbox Series X. The game was reviewed on PlayStation 5 using a download code provided by Sony Interactive Entertainment. Vox Media has affiliate partnerships. These do not influence editorial content, though Vox Media may earn commissions for products purchased via affiliate links. You can find additional information about Polygon’s ethics policy here.

Nintendo president, Shuntaro Furukawa, has spoken to investors about one of the company's biggest concerns about their next generation hardware platform. Speaking to...
Read more
PC Gaming

If you're taking on the Saudi Arabian Grand Prix, you'll want to know the best F1 22 Jeddah...
Read more
Reviews

Amid the cries of battle left and right and the chaos all around you, you don your mask and feel an overwhelming surge of...
Read more
PC Gaming