My childhood gaming experience can be defined by many things, but these three will always stand out – poor eyesight, my patient older brother, and dying on a pixelated screen over and over again. Part of the appeal of retro games is the difficulty – the lack of save states and handholding included – but the one thing that keeps us coming back for more is the nostalgia of it all.

The desire to revisit that sweet innocence of youth is what compels us to put ourselves through torture just to get a taste of that old-school exhilaration, a whiff of the good old days when life – and games – were simpler. The Taito Egret II Mini aims to recapture all that in a tiny portable package, but is that sentiment really worth the purchase?

The Taito Egret II Mini fits an entire arcade cabinet on the top of your desk, or even on the palm of your hand (albeit not the most convenient). It’s lightweight, portable, and packs the right kind of chunkiness that makes it look absolutely adorable no matter where you choose to display it. It’s sleek without losing its retro feel, and you can enhance its aesthetics with funky stickers and a do-it-yourself LED-lit marquee. It’s a little odd that the unit doesn’t come with any of the Taito titles’ posters for you to slide into the acrylic on top, but I suppose a little DIY gives the Egret Mini a more personal, on-the-go feel.

The miniaturized home console features a joystick you can set to four or eight directions, as well as your typical ABCDEF buttons. There’s a handy option for you to add as many credits as you can to a game, eliminating the need for actual tokens you have to pour blood, sweat and tears for at the arcade. Upon booting up the console – which can be powered up with a simple USB-C cable – you get the full lineup of Taito titles with a nifty preview of the game on your screen. You can also customize settings on the menu, such as screen ratio, volume, difficulty and the like.

Of course, the main highlight of the Egret Mini is that you can rotate the actual screen to fit the game you’re playing best. A simple snap and click can give you a landscape or portrait orientation, and the mechanism really does feel robust – you won’t have to worry about breaking the thing just because you went a little too trigger-happy with the rotation. The screen also locks nicely once you pop it back into the console, so there’s a satisfying tactical response each time you set your screen orientation.

Obviously, the very first thing I tried was Bubble Bobble, and the very first thing that happened was my expected demise. Everything from the music to the sound effects brought me back to warm weekend afternoons with my brother hunched over our family computer console, trying desperately to get our little cartoon dragons safe enough to rescue the love of their lives. As Bub and Bob raged against the perils of the Cave of Monsters on my screen, I found myself traveling back in time as the realities of my current world simply faded away.

That, in itself, makes each game from the Taito Egret II Mini lineup a joy to have a go at, whether it’s shooting pixelated aliens in Space Invaders or getting rid of unwitting bad guys popping out of identical apartments in Elevator Action. This time, you can create save files to make your life easier, or add unlimited credits to make sure you don’t perish and lose all of your progress mid-game.

There are 40 games available in the basic review unit I received – which is the Limited Blue Edition – but you can supposedly add ten more titles via the SD card you can slide into the console’s side slot from the expanded bundles. You can also plug in two additional controllers via USB (sold separately).

Playing retro games on the Taito Egret II Mini feels very satisfying in that it stays true to the OG titles in every aspect. Of course, with such a small screen and limited real estate when it comes to the buttons, you can’t spend hours on the console like you would with others, mainly because squinting at the tiny screen will likely give you a headache (for me , at least).

Thankfully, there’s an HDMI cable included in the package, making each pixelated game you play even more larger-than-life. You’ll still have to use the Egret II Mini’s gamepad though, but the huge screen is a great modernization of the classics on your console. 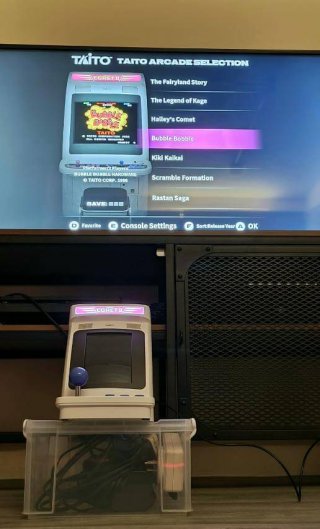 I also felt like my hands were a little too close to each other as I was playing, but it didn’t bother me too much, being a petite woman of Asian descent. It did, however, feel too cramped for my husband, so if you want to play games on a more comfortable level, you might need to shell out a few extra bucks for those two controllers instead. Most of the games in the roster are best enjoyed with two players anyway, so having a go at the Egret Mini all by your lonesome likely isn’t very ideal (for the record, my DualShock controller and my Hori gamepad didn’t work) . 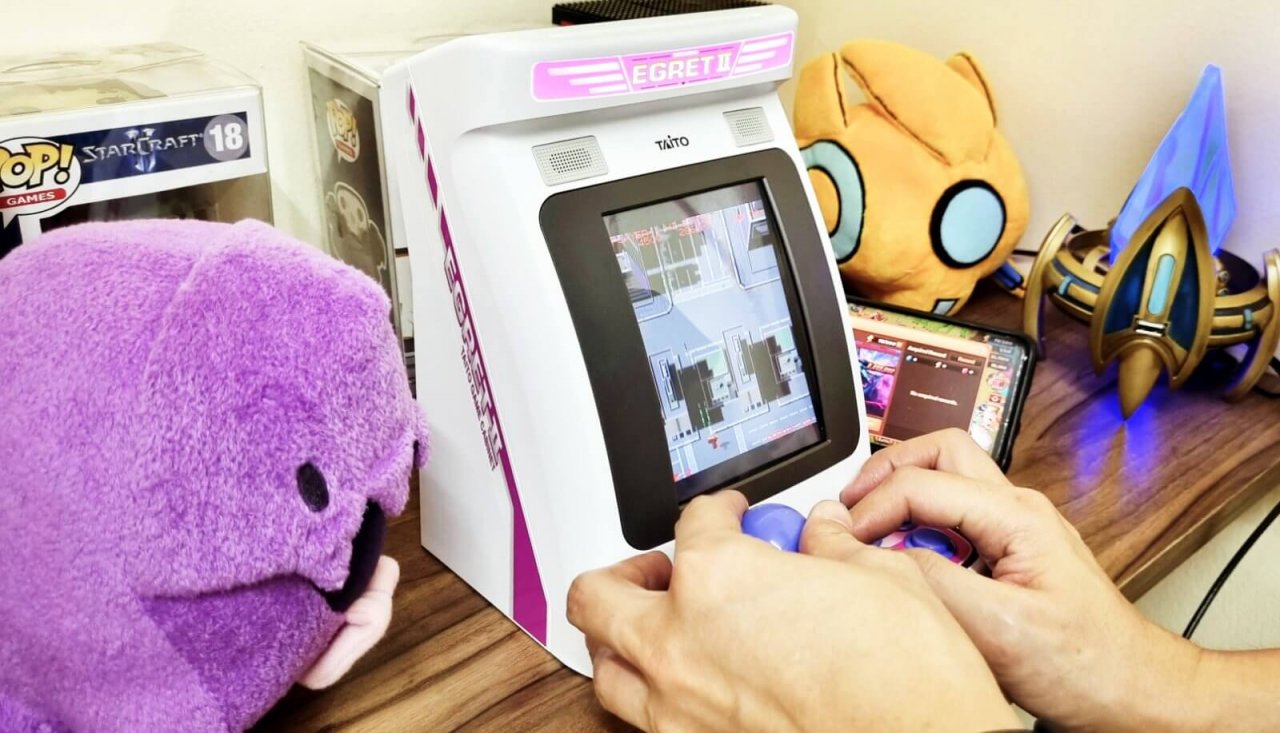 While the package comes with its own USB-C cable, you’ll still have to plug it in yourself, and oddly enough, plugging it into some power adapters didn’t work. I had to test out a few of them to find which ones did – it would’ve been more convenient if the package came with its own adapter, at the very least.

As for the buttons, they do feel sturdy, but there’s still that innate fear of breaking the thing when you’re button-mashing like crazy, which you’ll tend to do quite often. Some of the text in certain games are in Japanese as well, but then again, I suppose you don’t need to read the text to get into the game. The selection of titles also isn’t the most comprehensive – I’m guessing plenty of smarty-pants players out there will eventually find a way to sneak their homebrew games in there somehow.

Overall, the Taito Egret II Mini is an absolute joy to have in your home, but only if you’re a collector and a huge fan of retro games. There are, after all, only 5,000 units to be sold worldwide, so it’s a true collector’s gem.

The hefty price tag is something you’ll have to weigh, though – do you feel like it’s worth having a time capsule like this in your living room for that occasional burst of nostalgia? Ultimately, it’s up to you and your priorities, but apart from all of the features I talked about here, my fondest experiences of playing the Egret Mini were when I could practically feel my younger self squealing and wailing at the screen with my brother at my side as a kid all over again – and honestly, that feeling is pretty priceless.

The Legend of Heroes: Trails from Zero Review

The latest Japanese boxed-software and video game hardware charts are now in via Famitsu for the period of April 4th, 2022 to April 10th,...
Read more
Playstation

MultiVersus Will Be Adding Lebron to the Roster

News Welcome to the Jam. Published on July 22, 2022 Cameron Waldrop Home » News » MultiVersus Will Be Adding Lebron to the Roster You read that...
Read more
Videos

Are You A PC Gamer? Then you NEED to know these super easy PC Gaming Tips and Tricks for your gaming setup! ...
Read more
Games

BitSummit, Japan's leading indie games event, was held over the weekend in Kyoto, and among the games showcased was one called Tokyo Stories that...
Read more