Finding a community online is easier than ever. Social media platforms have simplified the routes of connection, as young people bond through Discord servers and niche TikTok trends. Back in the 2000s, however, the internet was just starting to connect people through message boards, webcomics, and gaming sites. And for over four million teens discovering who they were during the early aughts, a short-lived Nickelodeon TV channel and its website — where users chatted, posted on forums, and played games with each other — became a refuge.

In 1999, Viacom and Sesame Workshop teamed up to launch Noggin, an educational television network focused on kids from the ages of 2-14 years old. The station took off, turning a profit and reaching 43 million households in two short years. However, its success was hampered by a fundamental issue: Kids go to sleep early, leaving their nighttime block under-watched.

Struggling to sustain their older audience, Viacom split Noggin’s schedule to appeal to their tween-aged crowd. On April 1, 2002 at 6:00 pm ET, the Noggin logo faded out on screen for the first time and a hand appeared in its place, welcoming viewers to a brand new programming block: The N. The new block felt like Noggin’s cooler older sibling, and from that day forward, the same channel would air Dora The Explorer during the day and Degrassi: The Next Generation after dark. Storylines on The N showed teens navigating real-life scenarios, such as pregnancy and substance abuse. Viewers saw themselves in programs like South of Nowhere, a groundbreaking friends-to-lovers series starring two queer young women.

“We aimed to find a tool that helped adolescents imagine their future selves,” said Tom Ascheim, President of Warner Bros. Global Kids, Young Adults and Classics who founded The N during his 17 years at Nickelodeon. Ascheim credits The N’s soaring viewership to the representation in its programming, as teens were beginning to “recognize a life they might like to have.”

At the same time, the internet was becoming its own source of self-discovery for teens. Growing up online, in the ’90s, meant IMing a best friend and connecting in AOL chat rooms. Online communities were beginning to form. Some of these filled in gaps in education: Millions of young girls were gathering on message boards like gURL.com, anonymously asking for advice on touchy subjects. And by 2002, Neopets boasted over 19 million users between the ages of 12 and 17. Users were taking care of virtual pets, collecting secret avatars, and racking up Neopoints playing Meerca Chase. They were also exploring their creativity, designing their profiles and guild pages using HTML and CSS.

Given the stiff competition, the N’s digital counterpart needed to offer more than just tips on growing pains. Instead, the-n.com evolved into a bustling social hub for its fans. Members created detailed profiles and customized avatars. The N hosted moderated message boards where users discussed the latest episodes of Radio Free Roscoe or started threads to solicit real-life fashion tips. Users could take one of The N’s many quizzes; there were educational ones about navigating high school cliques, as well as fun ones like learning whether you were an Emma or a Manny from Degrassi. Members blogged about their daily lives, and they could “Friend” each other or send private “Nmails.”

“For The N, [the website] was more about community,” Ascheim shared, adding that “what we were doing very much anticipated the social world.” 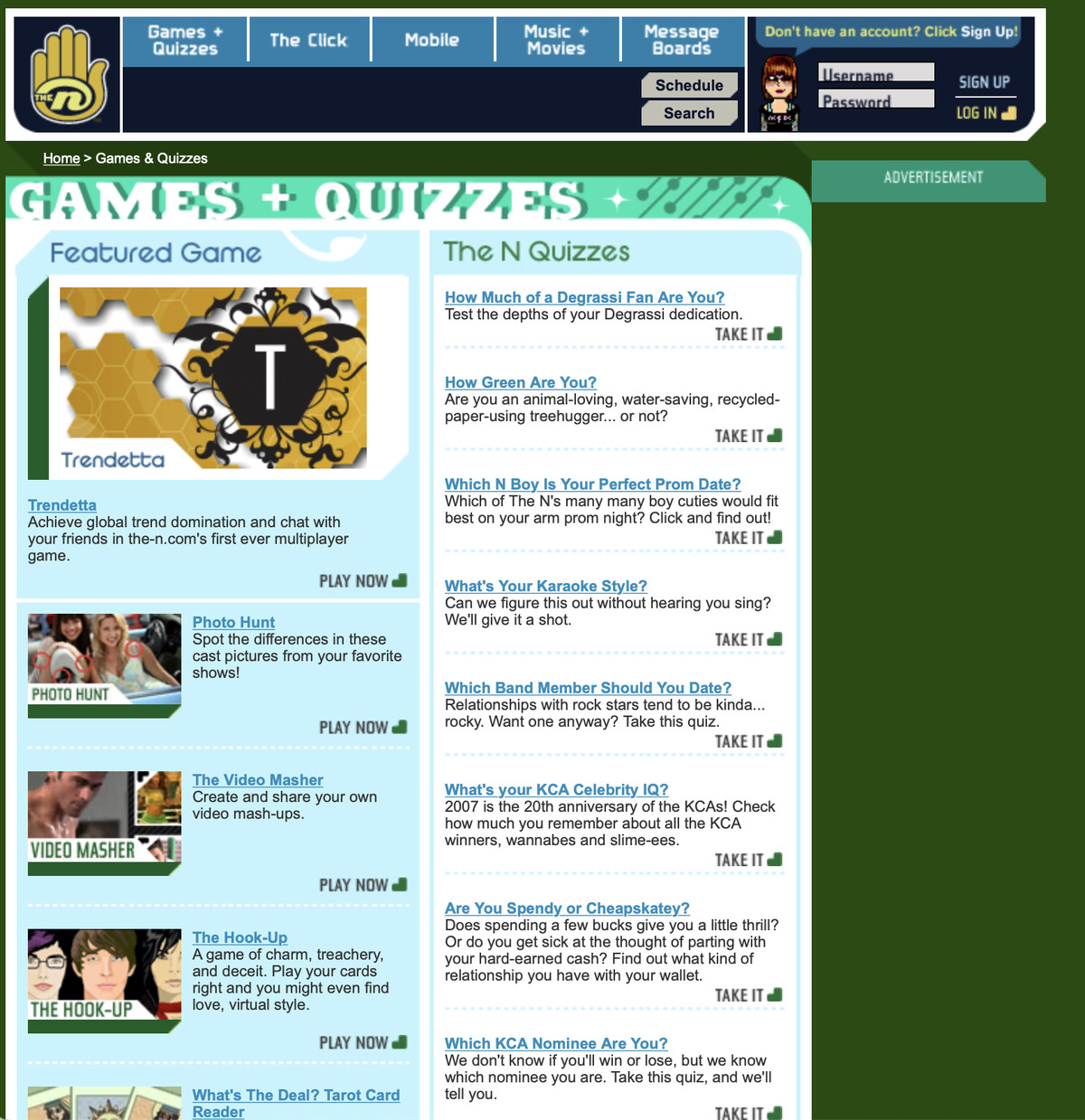 Image: the-n.com/Viacom via The Wayback Machine

But more than anything else, tweens and teens went to the-n.com to play games. There was Slasher!, an Among Us-like social deduction game. Avatar High and Avatar Prom were high school versions of The Sims in which players would gain or lose points based on their interactions with other characters. The Hook-Up, a dating strategy game, ended up being “the biggest one we ever made for The N,” according to Peter Ginsberg, the co-founder of Thup Games, who also created Avatar High and Avatar Prom.

Games became the highest traffic driver for the website. Careful to avoid pandering to tweens via “dress-up games,” Ginsberg specifically looked to The N’s online community when deciding which ideas to pitch the team next. Thup Games’ idea for Avatar Prom actually came from a roleplaying thread on The N’s message board, Ginsberg said. At the same time, The N’s game creators wanted identity and representation to remain at the focus of their game development.

“Together, we worked to create games that directly tackled social and emotional challenges,” Ginsberg said. That guidance led to players of Avatar High being able to design characters with a wide range of skin tones and hair textures, and fans of The Hook Up exploring same-sex love stories. This focus proved to resonate deeply with The N’s online audience, for which Ginsberg thanks the diverse mix of writers and the team at The N. Without both, Ginsberg believes they “could have never pulled off” such a high level of engagement.

For all of The N’s successes, the network met what feels like an untimely end. Things seemed to be going well: By 2006, over 40,000 teens had attended stops on the nationwide Degrassi mall tour, and in 2007, The N graduated from Noggin, moving into his own stand-alone channel. Unfortunately, the transition was clunky, and certain cable providers were unable to offer the channel a slot in its lineup. Nickelodeon began phasing out The N’s programming and replacing it with TEENick, an entertainment block with no educational curriculum and zero involvement from Noggin. The N lost its footing by 2009, and both the channel and its website closed down completely.

But fans never stopped caring about the site that helped raise them. Fans on Reddit continue to reminisce about the-n.com, while others are re-coding the website from scratch or archiving media from the channel. Benjamin Reyna, who goes by Benji, falls into the latter category as the creator of The-N Archive Tumblr. Reyna, who lives in Texas, has accrued over 10,000 followers since launching the Tumblr in January 2019. His posts are frequently reblogged by those who miss the channel and its community just as much as he does.

“There was something unique about The N,” Reyna said, sharing that he was an immediate fan of Degrassi but learned about The N’s other shows through the channel’s self-promotional commercials and interstitials. “The South of Nowhere promo felt like a dreamy slideshow. It was so relatable and felt like what I was going through at that age.”

After The N closed down, Reyna joined The N-focused communities on LiveJournal and connected with other teens on MSN Messenger. As a sentimental person, he started his own Degrassi and The N Tumblr to keep the channel’s memory alive. When looking for new content to share, he saves media using The Wayback Machine. Some of the throwback content even comes from his own hard drive: “Back then, there was no YouTube, and TV shows weren’t available on iTunes or Amazon, so I would go on the-n.com and save everything.” 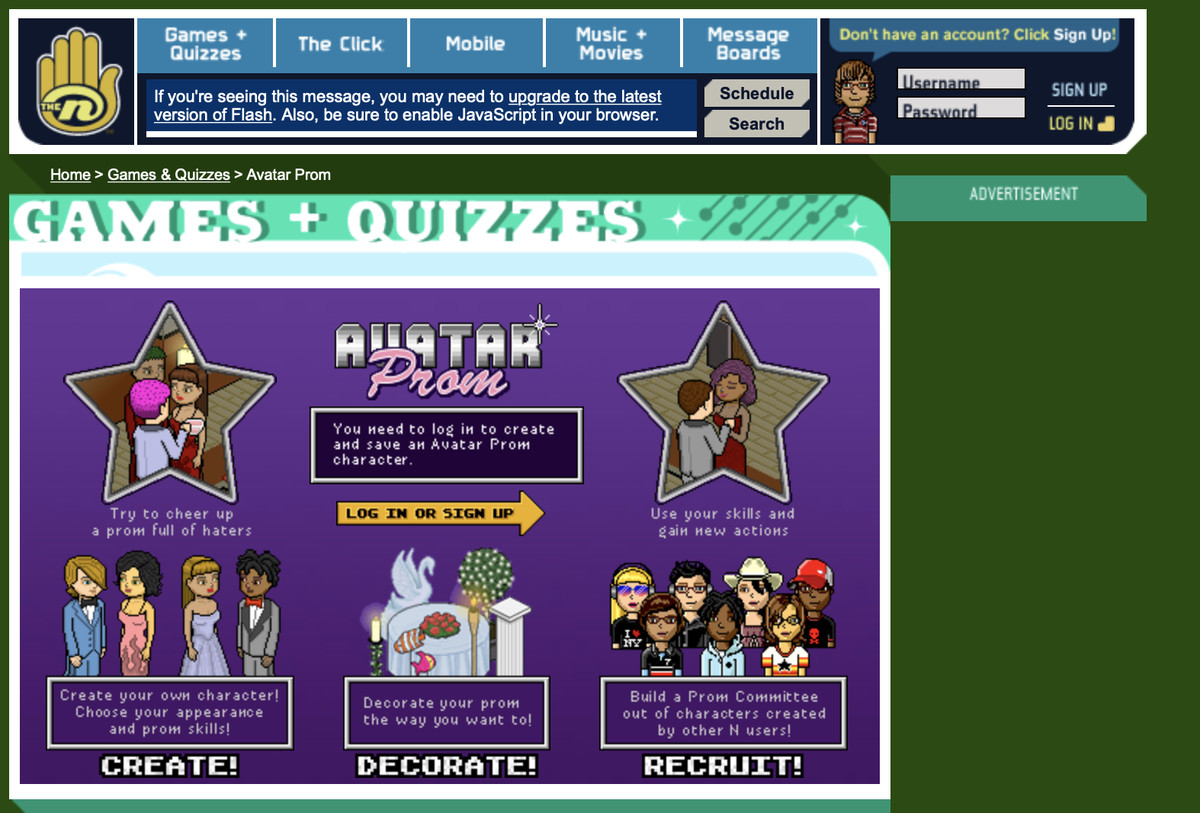 Image: the-n.com/Viacom via The Wayback Machine

Reyna doesn’t think there could ever be another community as special as the one formed by The N. “There’s only clips and streaming now,” he explained, speaking to the websites created by today’s networks. Social media seems to have replaced the kind of community found on those early aughts websites. At the drop of a new season of current-day TV, Tweets and TikToks about teen shows like HBO Max’s Euphoria and Netflix’s Outer Banks flood everyone’s feeds, creating a sense of community for those channels. But former fans of The N know how good they once had it. “[Networks] don’t care about fostering real engagement anymore,” Reyna said. “It just doesn’t feel as special.”

As for whether The N or its games could ever make a return, Ginsberg unfortunately confirmed that they no longer own the rights to The Hook Up, Avatar Prom, or any of the games they made for The N – Viacom does. He did, however, share that there had been plans to launch The Hook Up 2, before the-n.com shuttered.

“We were 60% through when The N started folding into TEENick,” he revealed, sharing that every few months for a couple years after, someone at Viacom would ask about its progress. After the official closure of The N in 2009, Thup Games considered The Hook Up 2 completely scrapped.

For now, we’ll just have to continue reliving the channel’s glory days through archival Tumblrs, pixelated gameplay recordings on YouTube, and old Degrassi screenshots resurfacing as Twitter memes. While the N might be gone, fans will make sure it is never forgotten.

How Long The Witch Queen Campaign Takes to Beat

Idle Awakening tier list – All of the characters ranked

Every year, the idle genre is becoming more and more popular. You can find hundreds of titles in this genre, and, of course,...
Read more
PC Gaming

Over the years, it's become apparent many of Destiny 2's monetization tactics are based on mobile game...
Read more
Nintendo

Three very experienced Japanese swordsmiths have worked together to create a full-sized replica of the Kakaru Kumo Naki longsword from the acclaimed Monster Hunter...
Read more