Ainsel River is one of the optional underground zones in Elden Ring. It’s located beneath Liurnia of the Lakes in the upper west section of the world map, and as such, it can be accessed from the Ainsel River Well in that zone. The Ainsel River Well is only one of the locations from which you’ll be able to access the Ainsel River, but the way this zone is set up can be confusing. It’s split into a south side and a north side, neither of which connect directly unless you leap from the north to the south side in the Uhl Palace Ruins, above where the Hermit Merchant is located.

There are a few important sections to understand, including the Nokstella, Eternal City subregion and its tie to Ranni’s questline, which is necessary to unlock Ranni’s secret ending. You’ll need to enter the north side of the map by finding the Fingerslayer Blade and progressing Ranni’s quest up until you gain access to Renna’s Rise, which contains the Waygate that teleports you to the Ainsel River Main site of grace. Both sides of the zone contain valuable treasure and there is only one merchant located on the south side of the zone.

Taking the Ainsel River Well elevator down to Ainsel River drops you off near a site of grace called Ainsel River Well Depths. From here, you’ll want to enter the cavern filled with giant ants and hang a left until you reach the Ainsel River Sluice Gate. Once you reach the room with the sluice, hang right up the side ramp and onto the rampart. The site of grace is on the opposite end of the walkway. Most of the ants you face can be taken down with slash attacks and magic, but the armored ants can quickly rush you if you aren’t paying attention; your best bet is to take them out one-by-one with magic or ranged attacks to their rear end, which they’ll expose if you dodge-roll away from their rush attacks.

From the top of the sluice, you can now make out the main area of ​​Uhl Palace Ruins. Getting down to the Uhl Palace Ruins from the sluice gate requires that you take the nearby elevator, read you fall and die. Once there, get prepared to fight a whole swarm of claymen.

Beyond the Uhl Palace Ruins is one of the Hermit Merchants of Elden Ring. He’s located in a large ornate structure on the far side of the “room” which contains a ton of claymen and a Malformed Star that can snipe you if you aren’t careful. Magic and ranged attacks are key to defeating the Malformed Star as well as any claymen that attempt to break your cover by charging you at close range.

Heading slightly southwest from the Hermit Merchant’s location gets you to the Ainsel River Downstream point of grace. Following the river west from that point provides a vantage point overlooking the grotesque Lake of Rot, but following the river north directly takes you to the Dragonkin Soldier of Nokstella fight and a good look at what to expect from Nokstella, Eternal City, which cannot be accessed directly from here.

Obtaining the Frozen Lightning Spear incantation (Fai 34 minimum to use it) requires you to defeat the Dragonkin Soldier of Nokstella, who also drops 12,000 runes upon dying. The Dragonkin Soldier of Nokstella can be a challenging boss if you attempt to fight it with more than one melee character at one time, but his attacks tend to be far more predictable when his focus is locked on only one person; the best strategy here is to keep his focus on one melee fighter while making sure your ranged fighters have plenty of space to stand back and hit the boss with everything they have. He only begins to use gap closers once 50% or so of his health has been depleted, which gives the party plenty of time to wear him down.

The Ainsel River Main area is only unlocked after you access the Waygate in Renna’s Rise during Ranni’s questline, or after you ride the coffin in the northwestern part of Deeproot Depths. This section of Ainsel River contains Nokstella, Eternal City–the place you saw earlier if you defeated the Dragonkin Soldier of Nokstella fight and procured the Once you’ve unlocked the Ainsel River Main point of grace, speak to Miniature Ranni a few times while resting so that she can move the quest forward and make you aware of her hunter, the Baleful Shadow, who will invade your game after you’ve passed through Nokstella, Eternal City.

Heading south from the Ainsel Rivel Main site of grace, you’ll encounter a swarm of claymen and a Malformed Star presiding over the gate to the southwest canal, which is where you’ll need to go at this point in order to follow the current of the river to Nokstella. In the ant cave ahead, you’ll reach a fork in the road where one path turns left and the other path turns right. Following the river right will take you further along your path to Nokstella. Meanwhile, following the path to the left will take you to some treasure.

Fight (or run past) the armored ant and move left through the tunnel to reach an opening where two gravity magic users guard a cliff facing the ruins where the Hermit Merchant is located. From here, follow the side of the cliff and jump down to the rock platform below, and then keep hugging the wall from that point until you’re able to jump down to the ruins with the treasure chest on top. That treasure chest contains the Wing of Astel, a magical curved sword that features the powerful Nebula special move and scales to Int as well as Dex and Str.

Nokstella is a subterranean city, like Nokron, that is occupied by silver tears and nox swordstresses. There are several layers of the city area, and the direction you choose to go in determines what kind of experience you’ll have. It is *not* necessary to climb the staircase and travel through the actual city in order to progress the Ranni quest at this point, but it is necessary to travel across the river basin on the city floor, fighting silver tears and other enemies including giant snails, until you reach an elevator on the west side of the basin that carries you down to the Nokstella Waterfall Basin point of grace. 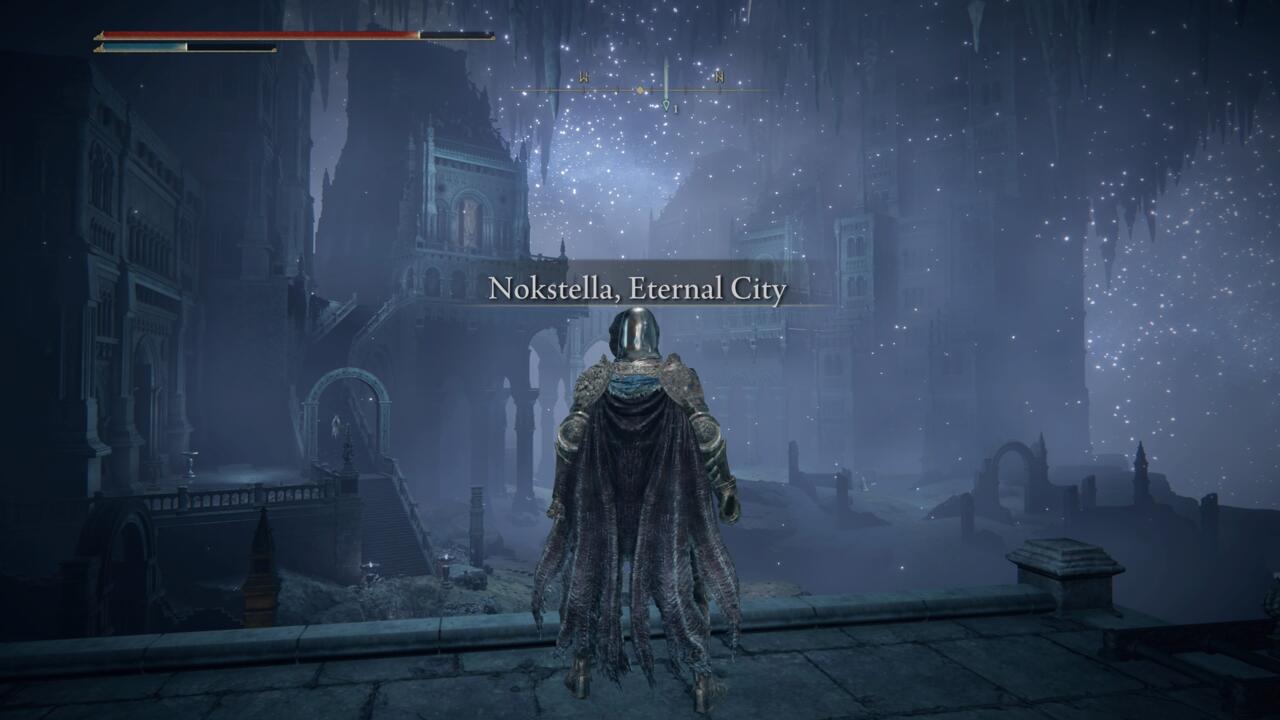 Following the staircase up from the Nokstella, Eternal City point of grace brings you to the first of three tiers that makes up the subterranean city. Each animal is dangerous to fight through, mainly because of the swarms of silver tears that explode into lightning when they get too close. However, using ranged magic and weapons (especially lightning-imbued weapons) is your best bet to fend these swarms off from a distance before they close the gap. You’ll also run into giant marbles that need to be taken down with heavy weapons or magic. Note that this guide doesn’t go into detail explaining each of the many treasures and smithing stones laden within the city itself; that’s for you to find and uncover.

The first and second tier are connected by bridge, but you’ll need to fight your way past the giant marble to gain access to the staircase on the second tier that brings you up into a chamber where a marble and several silver tears drop from the ceiling. Take a left out of the chamber and you’ll find yourself faced with another set of stairs. Follow that up to the third and final tier, where you’ll need to fight two humanoid Silver Tear bosses and one final nox swordstress. They can be tricky to fight in a group, so you should even the odds with an ashes summon of your choice here. Finally, run to the opposite end of the room from the entrance and open the treasure chest, revealing the Moon of Nokstella. Also nearby is a way down to a nearby Erdtree sprout with a Golden Seed attached to it.

Back at the Nokstella Waterfall Basin area that we mentioned earlier, speaking to Ranni again and exhausting all of her dialogue will brief you on the danger of the Baleful Shadow that lurks ahead. Following the corridor downstream will take you directly to the battle with the Baleful Shadow, who is an incredibly fast and aggressive combatant resembling Blaidd in appearance.

Baleful Shadow is weak against poison, making it useful to attack him with poison arrows and abilities (or throwing poison darts, if your Dex is high enough) so you can build up his poison meter. Otherwise, stay away for as long as you can since his attacks have incredibly high range in addition to brutal damage and speed. It would be wise to summon friends for this fight.

Once you’ve beaten the Baleful Shadow, Ranni will decide you’ve served your purpose and take off on her own, but not before giving you a mysterious key. At this point, you can decide whether or not to follow the story deeper into Lake of Rot or return to the Raya Lucaria Grand Library and unlock the chest next to Rennala. But other than that, congratulations on getting through Ainsel River!

Thanks to NZXT for sponsoring this video! Check out BLD by NZXT at https://goo.gl/rAHePc Buy NZXT parts on Amazon: ... source
Read more
Nintendo

We were all treated to a look at the brand new Fire Emblem adventure Fire Emblem Engage during the latest Nintendo Direct presentation and...
Read more
Games

The Last Of Us TV Series Gets New, Longer, Chattier Trailer

Screenshot: YouTubeThe Last Of Us TV series has had a couple of trailers, one very short other one a bit longer, but both of...
Read more
Videos