Elden Ring is massive and dense. It transplants FromSoftware’s tried-and-true design pillars of difficulty and experimentation into the sprawling Lands Between. And after 100+ hours with FromSoftware’s magnum opus, you’re either ready for something new or are chasing the next Elden Ring to tide you over until the inevitable sequel.

So where do you go next after finishing one of the best games ever made? We can help you with that.

We’ve broken 15 games into eight unique categories. Each group will offer one suggestion that’s similar to Elden Ring and another that’s nothing like Elden Ring. But each pair will also have a theme that unites them, to better guide your choice of genre or vibe.

You’re never going to get that perfect 1-to-1 Elden Ring feeling without jumping into Bloodborne, Dark Souls, or Sekiro: Shadows Die Twice. But with our list, you can try to maintain that high with a differently themed but similar game, or gently ride back down to Earth with something completely different.

Tunic captures some of Elden Ring’s freedom, complexity, and opaqueness. It’s a game about a little fox tasked with roaming around a world and solving puzzles. At times, it’s frustratingly difficult and it tells you almost nothing about how it works or what you need to do. But it’s also cute and colorful and bright. Tunic will give you different vibes while also making for a natural transition if you’re still looking to punish your reflexes and scratch the old noggin.

dissimilar: Kirby and the Forgotten Land

Tonally, Kirby and the Forgotten Land is about as far from Elden Ring as you can get. Sure, it takes place in the ruins of a once great land, but that’s the only thing the two games have in common. Kirby is simple, easy, and linear. You can deviate from the path, but only in short bursts, and it’s usually just for a breezy puzzle that will eventually funnel you back to where you need to go next. If you need something that’s “no thoughts, just cute” or a co-op adventure with a kiddo or a friend, Kirby and the Forgotten Land is a great post-Elden Ring pickup. 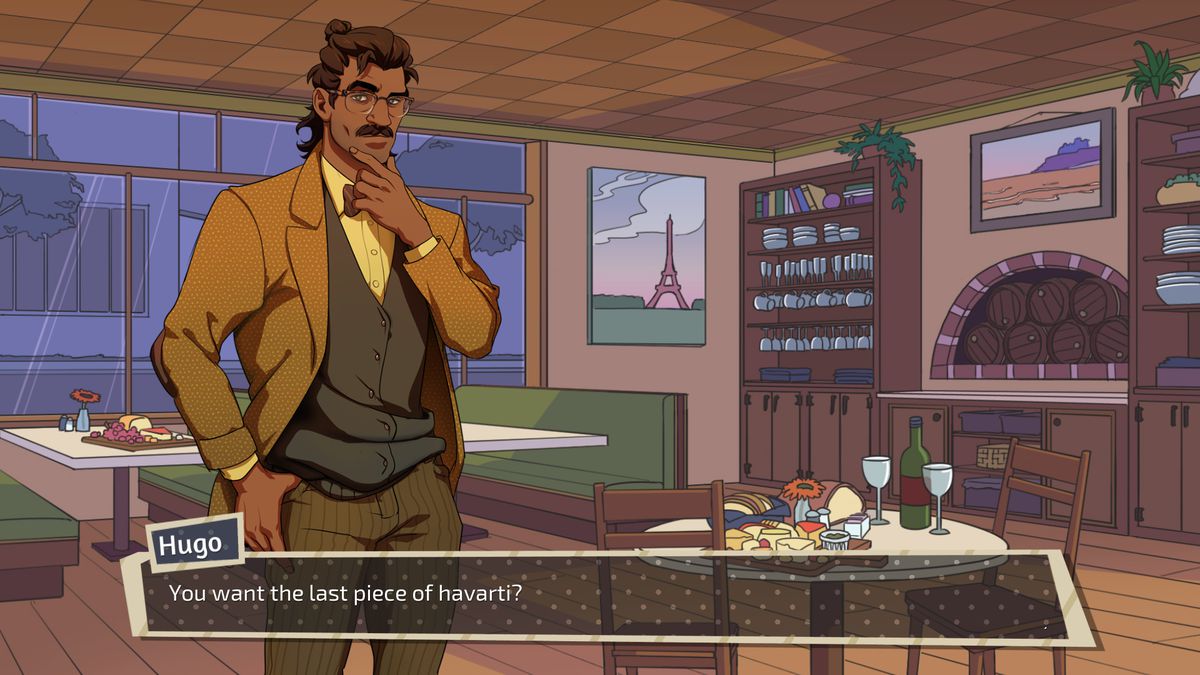 Dream Daddy is very much not Elden Ring. In fact, it may be the least Elden Ring-like game on this list. In Dream Daddy, you play as a single dad who goes around dating other single dads. You get to chat, go on dates, and try to keep up with your teenage daughter in a new town. It’s delightful, cute, and romantic, and there are no Elden Lords or horrible plagues to be found.

Group 3 – Exploration, with monsters and without 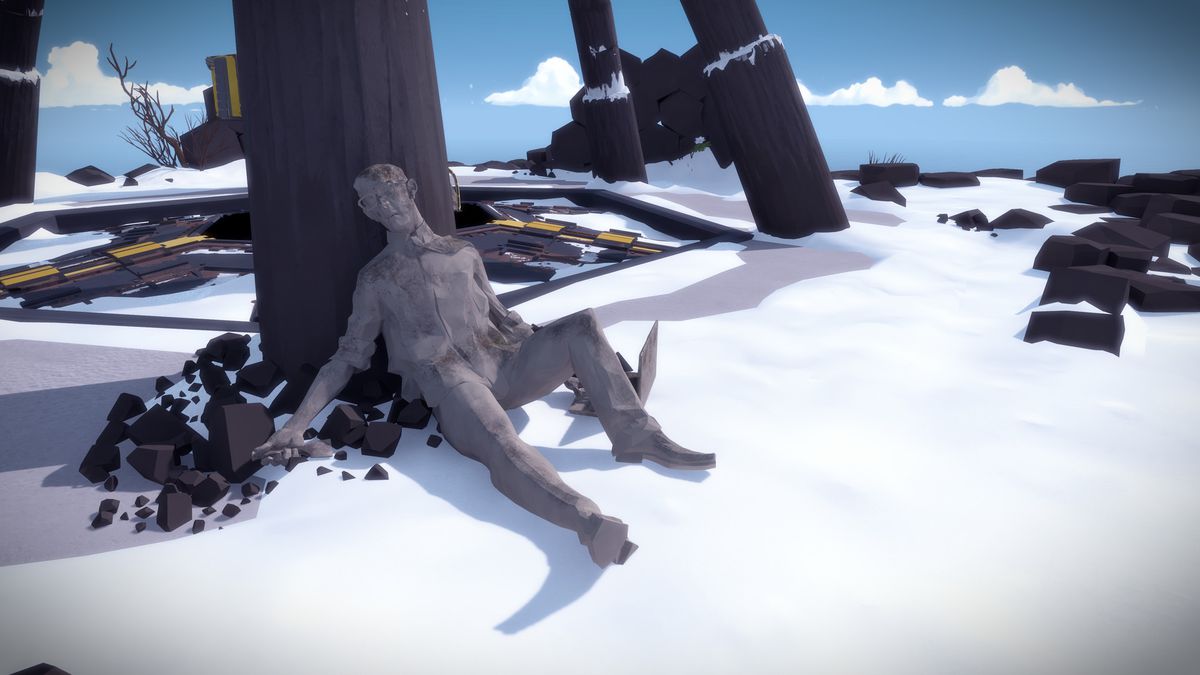 While Skyrim’s mechanics may not have much in common with Elden Ring, the exploration is part-and-parcel. Part of the fun of Elden Ring is going off in a random direction and coming across a new catacomb, town, or massive boss. In 2012, Skyrim practically boiled that thrill down to a science, giving you mountains of random dungeons and encounters to stumble on as you explore Bethesda’s massive, icy world.

If you’re eager to explore but want something completely different than Elden Ring, The Witness is a great place to start. This is a puzzle game that uses subtle and unexplained rules to help you draw a line over a variety of maze-like tablets. It’s mysterious and gigantic, but completely free of combat. It’s all about majesty and discovery in a colorful world, and will help you keep your mind off Godrick’s disturbing dragon arm. 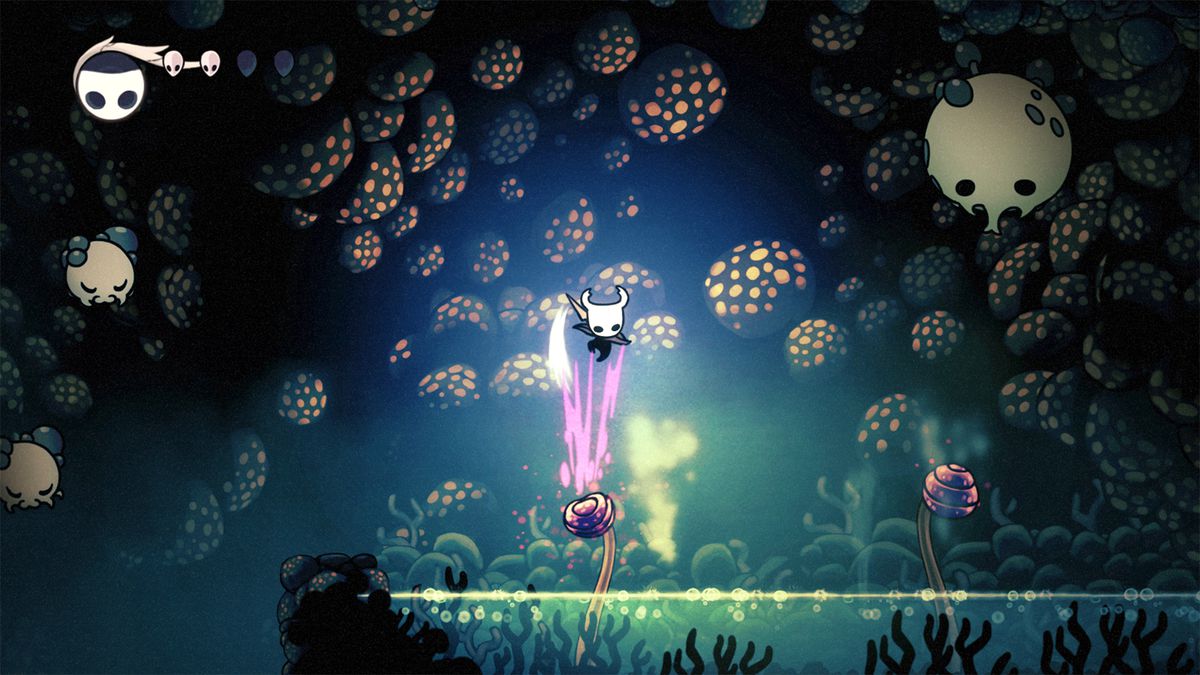 Hollow Knight is an excellent metroidvania with some serious FromSoftware leanings. It’s punishing, its systems are obfuscated, and failure comes with a price. It’s also got some of the light horror elements seen in Elden Ring, although filtered through a much cuter art style. While it’s certainly much simpler than From’s latest, and not nearly as long, it’s a great little adventure that won’t feel like whiplash after the punishing Lands Between.

Spiritfarer may be about death, but it has very little in common with Elden Ring. In Spiritfarer, you ferry the souls of the dead through the afterlife and to their final resting place. But instead of being grim and creepy, it’s wholesome. You create bonds with each soul, and help them embrace eternity comfortably, when they’re ready. It’s definitely sad, in the way loss always is, but there’s a hopeful twinge there. If you need something with a more loving undertone that still deals with the finality of death, Spiritfarer is a great jump after Elden Ring. 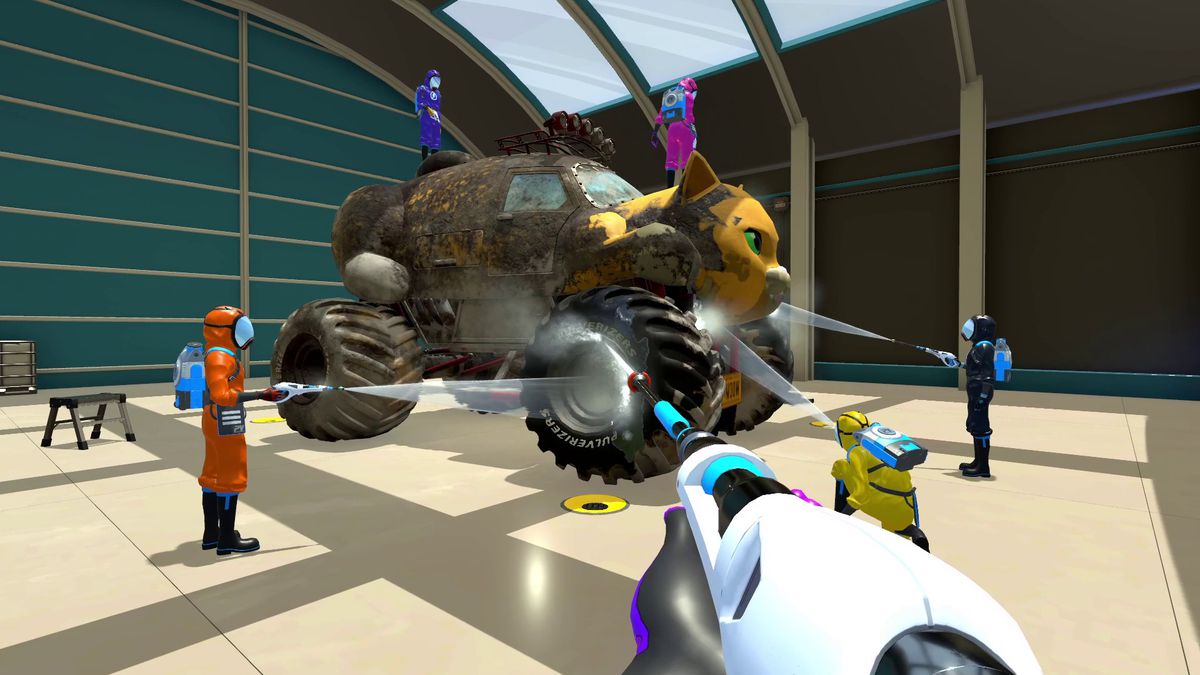 Death’s Door is about a cute little crow who serves as the grim reaper, and its combat is often reminiscent of FromSoftware’s. It’s both punishing and remarkably chill, with the world acting as its own, low-stakes puzzle to solve. Sure, you’ll have to get into the zone when you reach a boss, but otherwise you can use your little bird legs to explore far and wide in this relaxing adventure. It’s a great mix between the jaw-clenching combat of Elden Ring and a chill romp around the world.

PowerWash Simulator is one of the most “no thoughts” games out there, and it has nothing in common with Elden Ring. The entire goal of PowerWash Simulator is to use a power washer to clean off grime and filth from various vehicles and locations. The more you clean, the more cash you’ll get, and the better equipment and soap you can afford. There are stains that will take you longer to defeat than any boss in Elden Ring, but it’s still just an extremely chill game all about making the world cleaner. 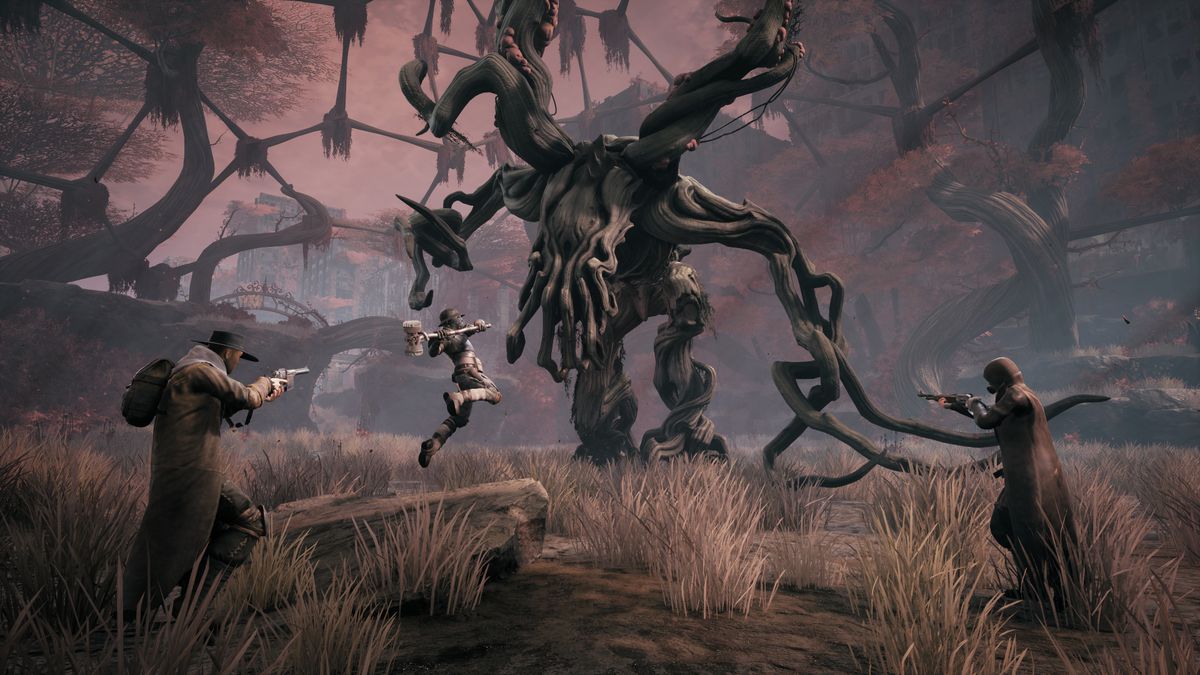 Similar: Remnant: From the Ashes

Dissimilar: Golf with your Friends 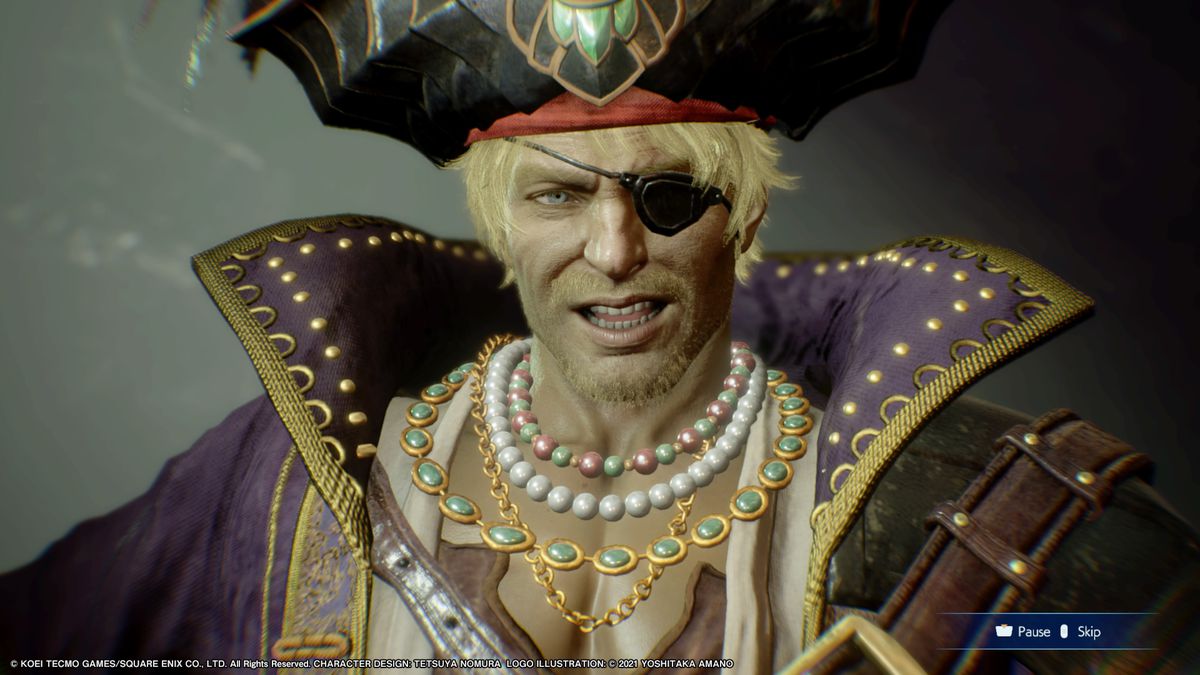 OK, no, Limp Bizkit’s music isn’t actually in Stranger of Paradise, but that’s the joke that’s going around, and honestly, I can’t tell the difference. (And if you can, keep it to yourself). If ever a game screamed Limp Bizkit vibes, it’s Stranger of Paradise: Final Fantasy Origins. Even better, it actually shares quite a bit of DNA with Elden Ring, so hear me out. Jack — the rejected Abercrombie model that serves as the butt-rock-listening protagonist — collects currency from enemies to level himself up. This empowers him to emerge victorious from tightly balanced combat encounters that require a great deal of focus to survive. It may not have that gothic atmosphere, but it’s got the classic FromSoftware frustration/accomplishment seesaw. So if you played Elden Ring and, like the rest of us, thought “this is missing something, and that something is Limp Bizkit,” Stranger of Paradise: Final Fantasy Origins is as close as you’re gonna get to fulfilling that dream.

Fine, you got me. I initially put Rock Band 4 here to make the Limp Bizkit joke work (although Limp Bizkit is actually in this game, as long as you’re willing to pay for the DLC). But the more I think about it, the more I’m sure that Rock Band belongs on this list. It’s a cathartic chaser after Elden Ring, so let’s run with it. Rock Band lets you just throw yourself into the music (Bizkit or otherwise), channeling very different emotions, and helping you forget about all the horrible plague dogs and dragons that gave you so much trouble in The Lands Between. You don’t even have to use a real controller, which is especially useful if you broke yours while playing Elden Ring. And when you factor in Limp Bizkit Pack 01 (sadly there is no Limp Bizkit Pack 02), it’s the perfect way to re-center your mind.

(grade: I have never intentionally listened to a Limp Bizkit song.)

[Editor’s note: Let’s not lie to our readers, Ryan.] 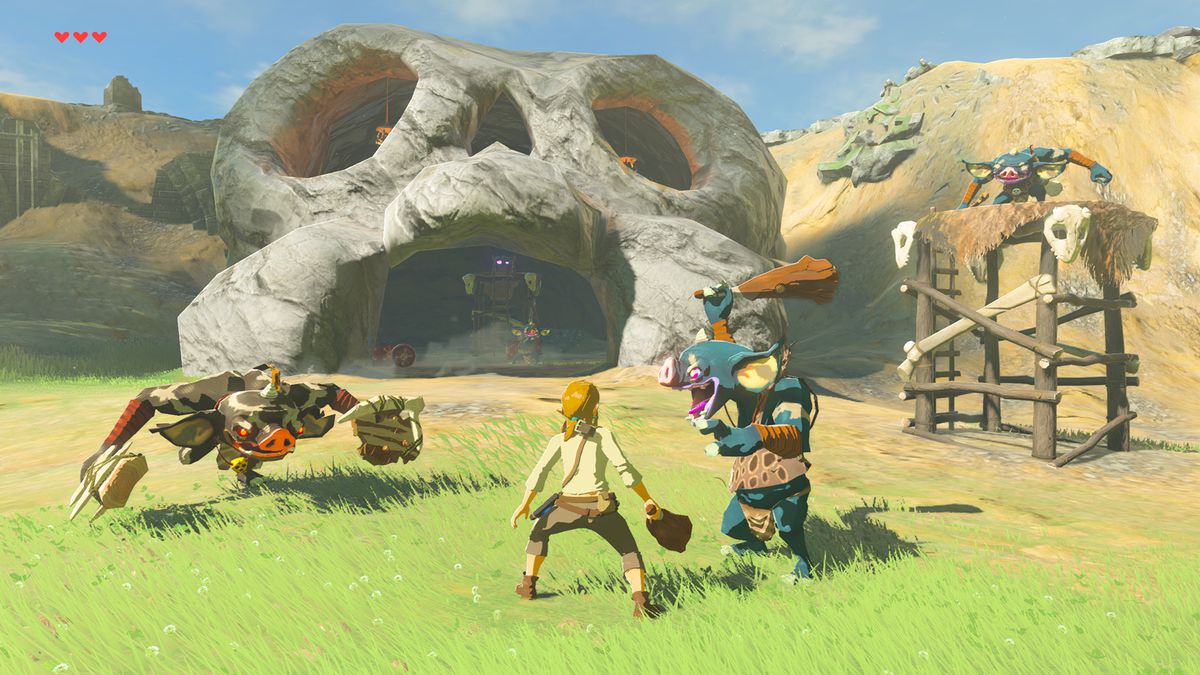 Similar AND Dissimilar: The Legend of Zelda: Breath of the Wild

For all of Elden Ring’s flexibility, it’s still a punishing FromSoftware game all about bashing your head against one struggle or another. Breath of the Wild has some of that as well, but with the ability to play with a physics puzzle for a while, or climb a mountain and just look over the vista. For every big boss there’s a serene moment waiting just on the other side of a hill, and that makes Breath of the Wild the perfect chaser after playing Elden Ring.

Capcom announced earlier this week that the Cloud Versions of a number of classic Resident Evil games will be coming to the Nintendo Switch...
Read more
Playstation

So, we've got new information on Gizmo the Mogwai, the next fighter joining Warner Bros.' MultiVersus, on Thursday, Sept. 8. He's...
Read more
XBOX

Redfall campaign progression is locked to host, not multiplayer teammates

For those wondering how Redfall would handle progression in a campaign that features cooperative multiplayer, Arkane Studios Austin has clarified that only...
Read more
Nintendo

US: Nintendo of America president Doug Bowser sends letter to Cub Scouts congratulating them for achievements

Nintendo of America president Doug Bowser has sent six Cub Scouts a lovely congratulatory letter for their achievements after they were awarded the rank...
Read more