My FromSoftware fandom has always been uneven.

Like many, I unsuccessfully tried to battle through the grim dungeons of Dark Souls and Dark Souls 2 before finding a home in Bloodborne’s gothic alleyways. Later, Sekiro: Shadows Die Twice proved that my newfound FromSoftware love wasn’t just a fluke. But I was still deeply divided. On one hand, FromSoftware’s one-offs are some of my favorite games ever made. On the other hand, I’ve never finished a game in the “Souls-like” genre’s namesake franchise.

My early hours with Elden Ring, From’s sprawling new epic, were reminiscent of my first tepid forays into Dark Souls. But now, 60 hours into Elden Ring, I think I finally get it — not just the thrill of Elden Ring, but that of Dark Souls as well.

My initial trepidation with Elden Ring was entirely due to its size. FromSoftware’s past titles intentionally obfuscated where to go next, but at least you only had so many options. With Elden Ring’s open world, however, I was able to go in every direction from the start. I was quickly wracked with decision. Even the guiding lights on the Sites of Grace — which just pointed me toward a boss that I was too underleveled to take on — couldn’t help me. When I’d stumble into a catacomb, I’d eventually leave victorious, but annoyed that all I got was a bow I’ll never use.

As a player who typically doesn’t like the loose and free structure of modern open world games — even those filled with icons telling you what to do — I feared that I’d never click with Elden Ring. And so I decided to mainline the game as much as I could. With some decent FromSoftware experience under my belt, I felt confident enough in my skill level that I wouldn’t need to grind things out, and only looked for items that fell neatly into my pre-determined build.

Using flavor-of-the-week builds like the Moonveil katana and magic (which I’d heard were good), I pushed through Margit the Fell Omen, Stormveil Castle, and Godrick the Grafted. I was frustrated, under-leveled, and bored of riding my horse from place to place. I eventually pushed into the Lake of Liurnia and Raya Lucaria Academy. But I was just playing out of obligation and recommendation, trying, desperately and stubbornly, to figure out how I could make the experience more like the FromSoftware games I adored.

After 20 miserable hours, I killed Rennala, Queen of the Full Moon, and started two new ventures: Respeccing my character and starting Ranni’s quest.

I wasn’t enjoying the Dexterity/Intellect build I was using, but it was working well enough that I was afraid of change. Still, I’d collected a “Colossal Sword” just called “Greatsword,” and was curious about it. So despite being a Prisoner class not initially designed for Strength builds, I changed things up. Suddenly, I was rolling around in heavy armor with a sword twice the size of my character.

Not immediately convinced by the new build, I started Ranni’s quest as a kind of test. Then I started cleaving my way through the hand-spiders of Caria Manor, and I knew this was the playstyle for me. Using my new toy, I reintroduced myself to the witch, defeated Starscourge Radahn, unlocked his two massive swords, purchased his armor, and cosplayed as the tiny horse-riding demi-god for the rest of the game.

In this Radahn enthusiast playstyle, I discovered a spark that reminded me of the FromSoftware titles I love. Every battle was punishing, forcing me to play aggressively against much faster foes. If I wasn’t deliberate with my combos, and didn’t know their timing to the exact second, I would fail.

After two-dozen hours, I found my fun in Elden Ring. 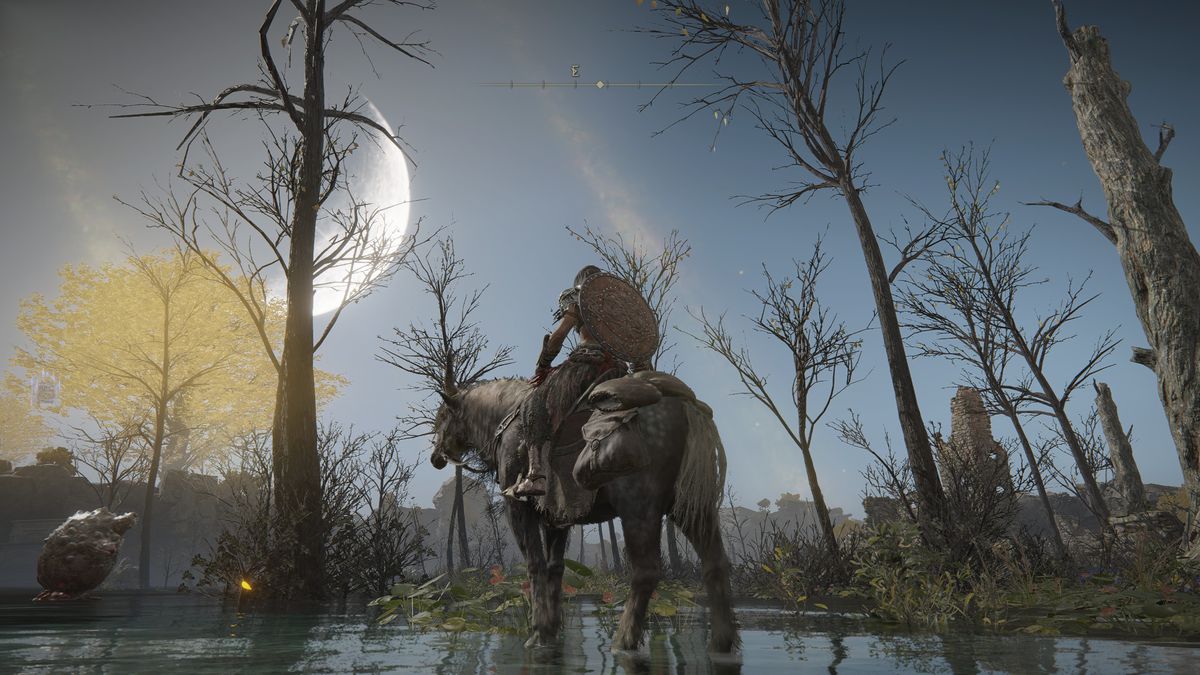 In a larger sense, it dawned on me that my issues with Elden Ring were my own fault. With Dark Souls, I always disliked how flexible the builds were. Even when I was having fun, playing aggressively and ignoring shields, I felt like I was doing something wrong and not playing the game the way From intended. While that might not matter (and in fact excites many players), it kept me from wanting to engage.

In Bloodborne, I could choose from a lot of wacky items, but the intended playstyle always felt clear: Defensive play was punished while aggressive play was rewarded. So whether I was using the Hunter Axe, the Threaded Cane, or eventually (and always) Ludwig’s Holy Blade, I was never playing defense. Similarly, I loved Sekiro because it only gave you one weapon. It was rigid, which made for a more crafted experience — this is the challenge and this is your tool, now get to work.

Elden Ring is more Dark Souls in that regard than Dark Souls itself. There are hundreds of items to choose from, and the freedom started grating on me almost instantly. But changing my build because I found an interesting weapon helped alter my thinking. There is no wrong way to play Elden Ring or, by extension, Dark Souls. The beauty of these games is and has always been that FromSoftware gives players near-endless options, and all of them are valid. Bosses and basic enemies don’t always play fair (hitting you while you’re down, one-shotting you, etc.), so FromSoftware offers plenty of tools to help even the playing field.

Don’t confuse my own hang-ups with Dark Souls as the insufferable gatekeeping of some Souls-like fans (I’m thrilled by Elden Ring’s more accessible format). My frustrations with Dark Souls come when I refuse to meet the game halfway. For example, despite really enjoying the Demon’s Souls remake, I put it down shortly after using my bow to cheese the Armor Spider, feeling like I’d “cheated.” Elden Ring showed me that changing builds and items to fit the fight — or my mood — is not only intended, but a crucial key to success.

When I emerged from the linear path of Ranni’s quest — which let me focus on my new playstyle — I started exploring areas I’d previously skipped. Now every dungeon or wayward body contained an item I might actually use in a future build or for a tough boss fight. I stopped poo-pooing spells and weapons that didn’t fit my idea of ​​success. 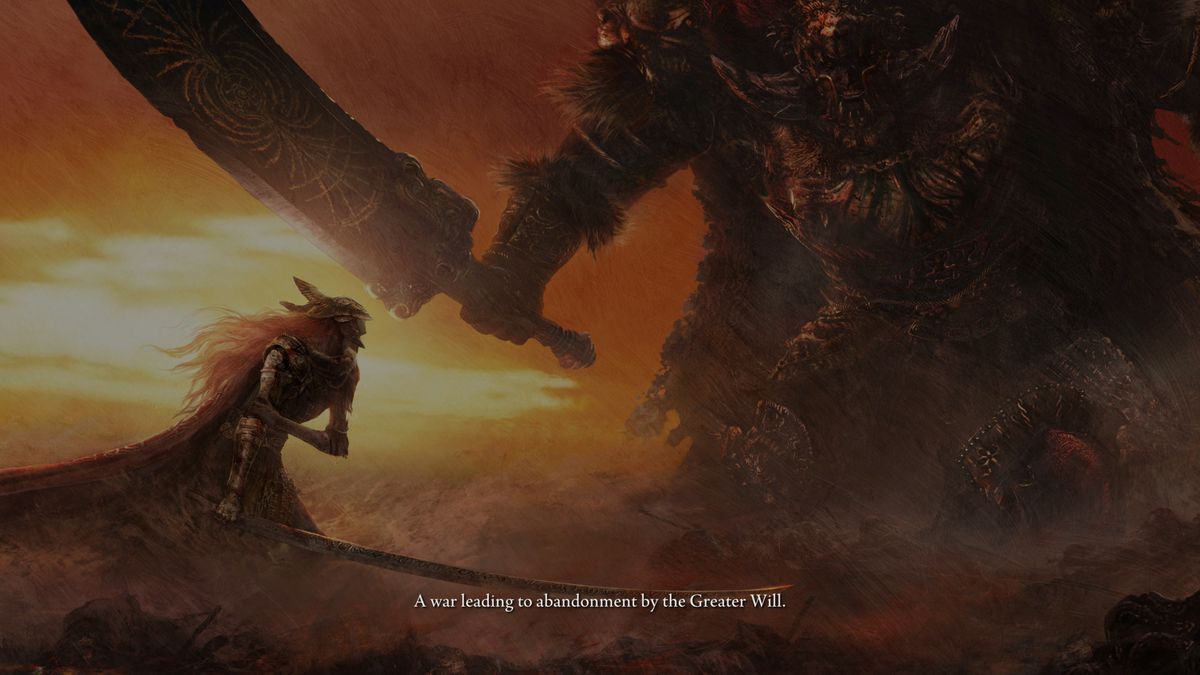 Me against Malenia, basically Image: Fromsoftware via Polygon

I ended up choosing to use Spirit Ash summons and magic sparingly for the rest of my playthrough. But that was my choice based on how much fun I was having 1v1ing bosses with my giant gravity swords. Still, I went out of my way to grab cool spells and summons because it was always something I could see myself using later; and when I used a Spirit Ash to help me kill Malenia, it certainly didn’t feel like “cheating.”

With Elden Ring done and dusted, I want to revisit the Dark Souls games. I expect I’ll still end up using a big-ass sword in my playthroughs, but I want to leave myself open to more possibilities. Maybe I’ll pick up some spells without feeling guilty, or take a victory where I can get it with some creative bow-sniping.

Elden Ring helped me overcome my own restrictions and earn success with creativity instead of just brute force. As cliche as it sounds, Elden Ring reminded me that the only wrong way to play a game is to not have any fun.

The Game Awards organizer Geoff Keighley has chatted with Video Games FN about this year's awards ceremony where he said they have over 50...
Read more
Games

Pokémon Scarlet and Violet expand on the world of Pokémon in so many ways. The games are set in the giant,...
Read more
Nintendo

Bandai Namco has uploaded the launch trailer for the classic Pac-Man collection Pac-Man Museum+ The retro collection contains plenty of bonus content along with...
Read more