Overwatch players who don’t use voice chat may not get much communication from their teammates, with the exception of “I need healing!” being spammed at their team’s healers. Blizzard is hoping to address that in Overwatch 2, enhancing communication with a new ping system — à la Apex Legends — that will add context to callouts and chat in multiplayer games.

On Thursday, Blizzard offered an in-depth breakdown of Overwatch 2’s ping system, showing how contextual pings will expand upon Overwatch’s existing communication wheel. Players will be able to “activate a contextual ping depending on what you’re aiming at within your line of sight” with the press of a button, Blizzard said. “For example, if you’re playing Tracer and ping an enemy Reaper, your teammates will hear Tracer call out that Reaper’s location.” Should that Reaper use his Shadow Step or Wraith Form abilities, breaking line of sight, the ping will show his last known location.

“One of our goals was to augment speech and give people a way to visually interpret voice communication,” systems designer Gavin Winter said in a post on the Overwatch website. Principal designer Adam Puhl added, “It’s a more accurate, clear, and understandable way of communicating rather than hearing someone yell, ‘Reaper behind,’ or, ‘Reaper, Reaper, Reaper!’”

Overwatch 2 players will also be able to use the ping system to respond to their teammates’ pings. In another example, a Mei is shown responding to a Soldier: 76’s request to “group up” with four options: “yes,” “no,” “ready,” or “go.” 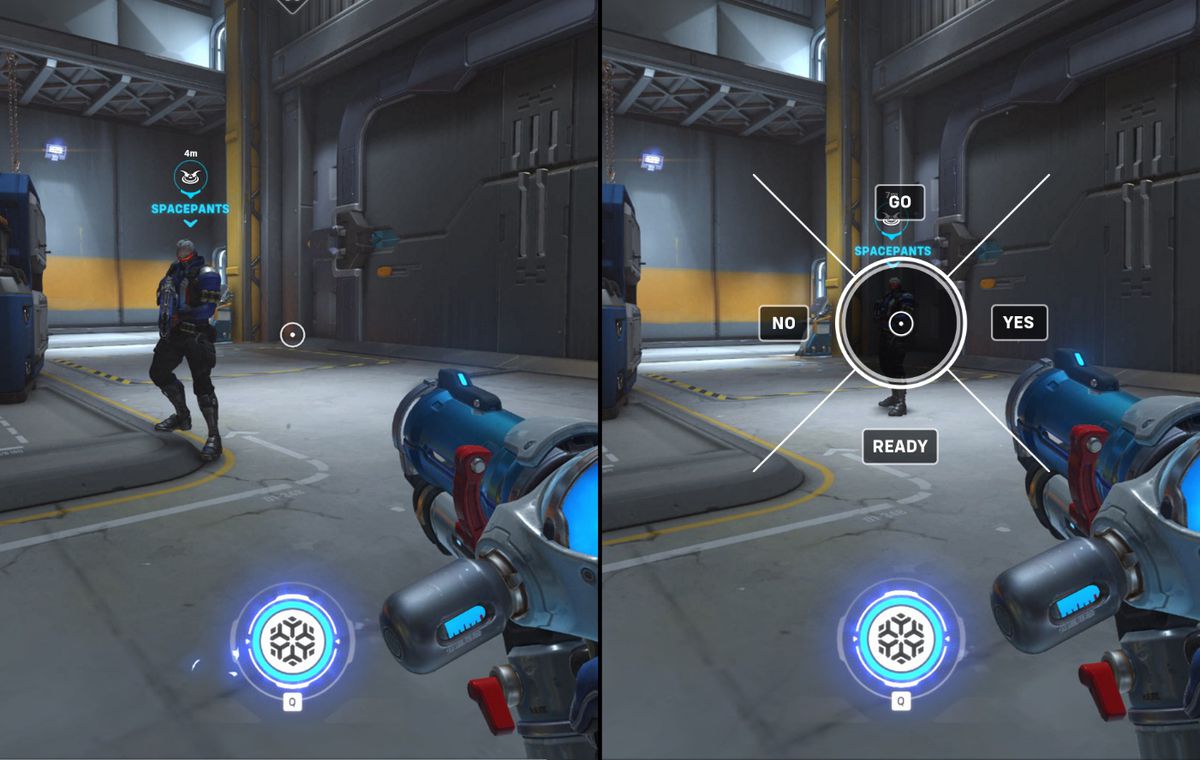 Winter said that the system is designed to “help with toxicity in-game,” and that Blizzard is adding systems to contend with players spamming pings — players will have the option to turn off pings or mute specific players. “We do have heavy spam protection right now that we are open to adjusting, but we really want to see what works best for the community,” Winters added.

Blizzard announced earlier this month that it was changing its release plan for Overwatch 2, “decoupling” the game’s PvP and PvE elements in an attempt to get the sequel’s competitive multiplayer content into players’ hands sooner while it continues to work on single-player and cooperative content.

Publisher Activision Blizzard said in November it was giving the Overwatch team “extra time to complete production and continue growing their creative resources to support the titles after launch,” acknowledging turmoil and turnover at Blizzard as contributing to the game’s longer-than-expected development.

Activision Blizzard is currently facing multiple lawsuits and federal investigations, as well as calls for its CEO, Bobby Kotick, to resign over serious allegations of sexual harassment and assault at the publisher and its studios, including Blizzard. Those allegations and Activision Blizzard’s handling of the accusations have led multiple corporate sponsors to distance themselves from Activision Blizzard and its Overwatch esports league in recent months.

Sonic Frontiers director says development of the game is done

Sonic Frontiers is just 2 and a half weeks away from releasing. Back in June, it was confirmed that the game was in...
Read more
Games

So, the Steam Next Fest is currently underground. It's this week-long digital celebration of upcoming PC games where you can check out tons...
Read more
Playstation

So, we've got new information on Gizmo the Mogwai, the next fighter joining Warner Bros.' MultiVersus, on Thursday, Sept. 8. He's...
Read more
Playstation