Everybody has a phone now, in fact, quite a few of us have multiple phones. Over the years the market has fluctuated and shifted, but we’re at a point where a lot of the big phone manufacturers out there are brands that we’ve known of for years. Honor, and their honor 50enters the market in the strangest of ways though – it’s a brand we know, but the manufacturer used to be a label, a sub-company, while it now stands independent of its former Huawei parent company.

So, the Honor 50 is, in some ways, a debut device; A courageous foray into the European market and at an affordable, mid-range price point too. But, on the other hand, this is a company that has marketed plenty of other phones and devices over the years; So there’s an expectation there for them to not only step forward from the issues (be that diplomatic, or technical) that they had in the past, but also to push forward technologically.

It’s simultaneously a challenging and unique opportunity, and for the most part, Honor has succeeded. From looking at their own list of key features — 6.57Inch OLED Display, 66W HONOR SuperCharge, 108MP Ultra Clear Camera, 75° Super Curved Display, Qualcomm Snapdragon 778G — it’s incredibly clear who they’ve made the phone for. The design, which features a dual ring design on the back, the wrap-around screen and a border-style wrap-around casing element, only hammers this in. It’s a phone designed for young, social media users. It’s a massive market, and the price point opens it up for that audience.

With dimensions of 160mm x 73.8mm it actually comes in a little larger than the iPhone Pro Max 11, due to its height. That said, there’s a thin black border around the screen, and the curvature of the screen on the sides is quite subtle, so the screen is about standard for a phone in this size range. I’ve never actually been a fan of curved screen phones because I have a permanently broken thumb which means I sometimes miss with gestures and inputs.

I was pleased with the Honor 50’s curved screen, despite the opportunity being there, there were not any misclicks, and while the gesturing in from the side is present, the gripping fingers and thumbs don’t seem to conflict with the swiping required to use them. In fact, the only issue I had with the screen was that sometimes it decided it was locked and other times in a simple standby, always-lit mode, these seemed to have different unlock procedures, which I didn’t manage to fully figure out during my time with it. 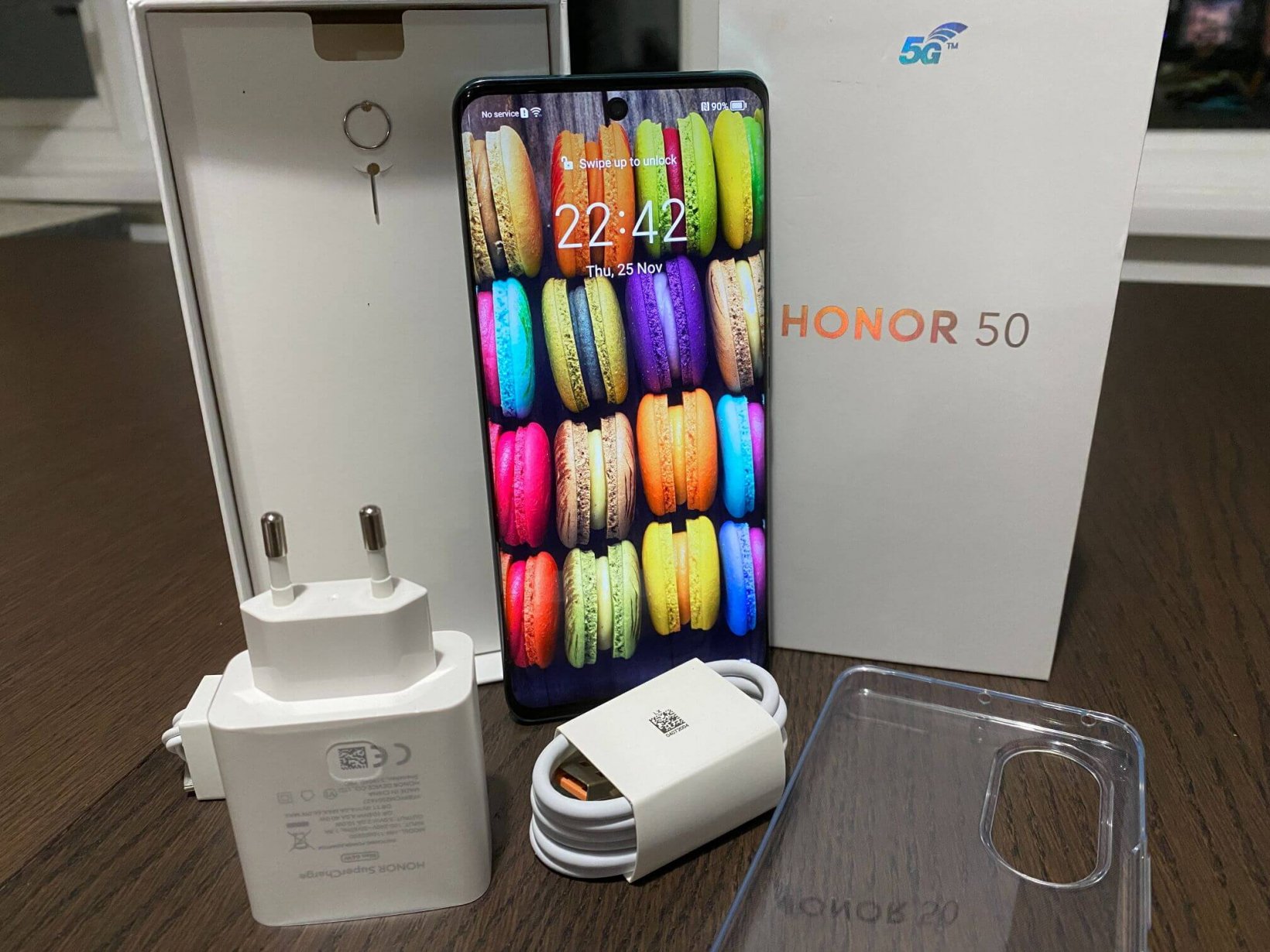 What about the design of Honor 50?

It’s a sleek, thin design, and an incredibly light phone… but, the rear cameras stick out from the back, which makes them (as well as the sides) feel like gluttons for scratching, especially if shoved in a packed pocket, or if dropped. That said, the whole thing feels very dense and robust, nothing feels like it’s going to come loose, and that sensation is underlined by the feel of the glass when holding it. There was also a thin, jelly-plastic case included, which isn’t the most stylish choice but serves as a good solution to potential camera crises.

The curved screen feels surprisingly responsive and I didn’t have any weird experiences when using the phone to play games. The refresh rate was really good, and the phone ran games like Genshin Impact, Wild Rift and Cookie Run: Kingdom well; I didn’t experience any odd slow-down or delayed loading times. One thing that I did notice is that the edges of the screen seemed darker, due to the nature of the screen, although that didn’t really cause me any issue, but might if it comes to taking precise photos.

Battery and an exceptional camera

As I said earlier, the Honor 50 feels like it was designed with a specific audience in mind, and that audience is an audience that wants a good battery, strong internet capabilities and great camera features. The phone delivers in all three regards. It’s 5G compatible out of the box and, after I was done with the phone I left it, at 30% charge, back in its box. It persisted for three days before finally turning itself off, and even then, I turned it back on and it had enough charge to power on (about 4%). Not only does it have a really low background battery usage, but it also charges really quick. That said, the one I received had an EU charger in it, so I didn’t get to see how long it was charged with the included charger.

The cameras though, they’re the real center point here. Both the front and rear cameras have a lot of different uses on the phone and each features a pull-out wide-view. The main camera, the rear camera, has a 108mp sensor and features a 10x zoom, even at 10x elements were distinguishable which is more than can be said for max zoom on other devices. There are smaller cameras included too, which help with exterior and close-up shots. I’m a sucker for pulling focus onto close-up objects in photos, and this phone really delivers on that. Interestingly though, it really, really compensates for low-light, much more than my iPhone 11. I’ve not decided on whether this is a good thing on not yet, but if you take selfies and group photos at night, rather than scenic shots, then this as default will likely be welcome. 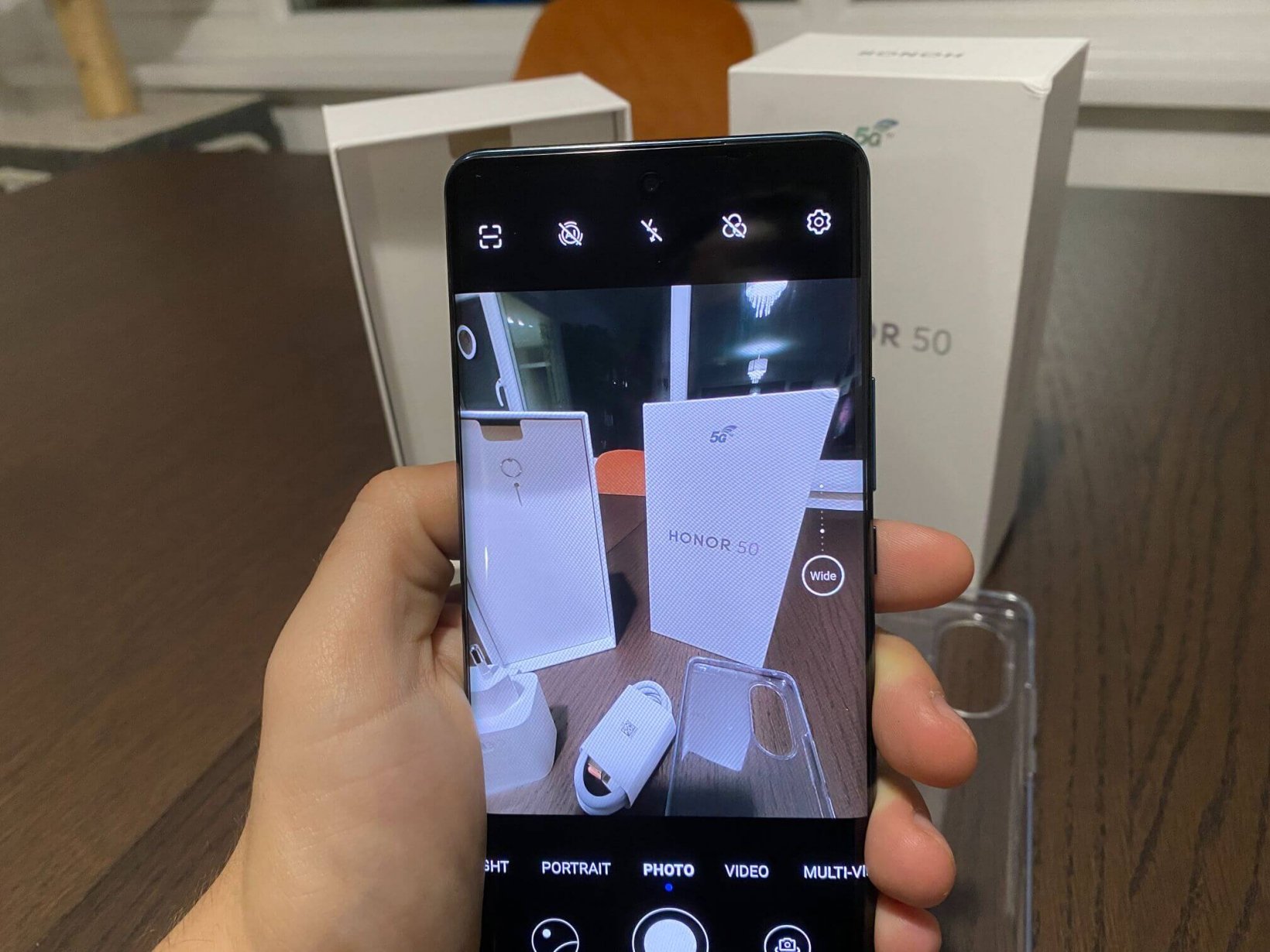 That’s also present on the portrait, front-facing camera. Bokeh and Beauty features are present, but even with both of these dialed down, there’s a bit of compensation done by the camera when in a slightly-lit room in the evenings. Blemishes, freckles and moles can be lost quite easily due to this, which is probably great if you’re sharing online but is a little bit odd. While it does this, it’ll take an almost perfect detail from the stuff going on around you — a book behind you might have a fully legible title — but your freckles are gone.

Both sets of cameras work well for photos, but they work great for video. You can capture 4k at decent resolutions for both, although the wide-angle lens will only capture up to 1080p… but, the most interesting thing is the Multi-Video mode, which captures from both cameras at the same time, showing your reaction to what you see in real time. I quite often take video calls with my children, and we regularly flip the camera or rotate the phone to show what we are talking about. This, while not compatible with how we stay in touch, feels like a peek into the future, and is a really cool feature for video-based social media. 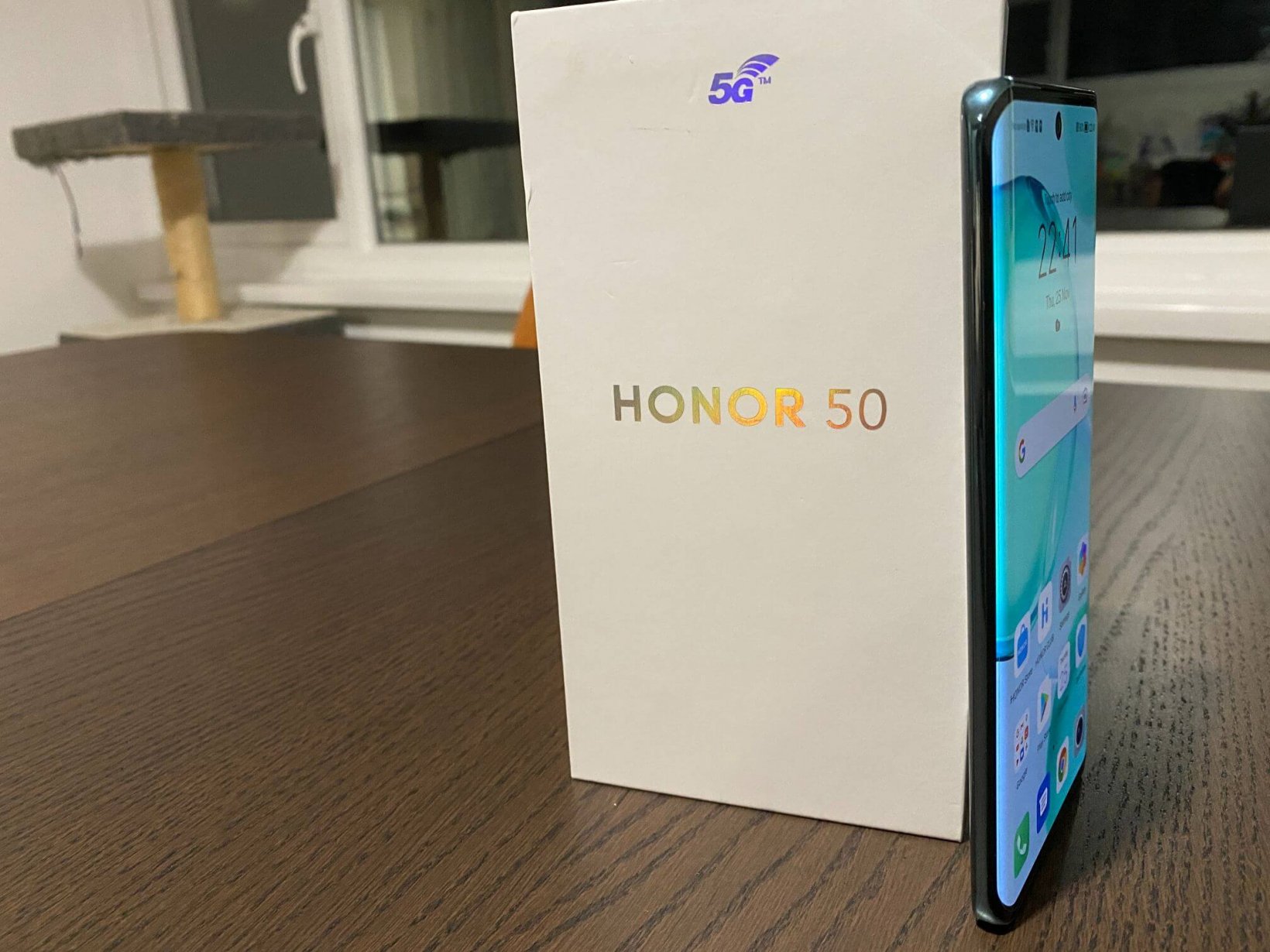 Let’s dip from new features to the elephant in the room. The Honor 50 is pretty much fully equipped with the core apps in the Google Play library. You can access Google Play Store, YouTube, Gmail and more straight out of the box. Alongside that, you’ll find some of the Honor staples that you’ll recognize from over the years. I was, historically, a Huawei Honor user, and while I found some of the elements of their design to be a bit out of synch with the rest of the industry, my time with the Honor 5x and PSmart made me really appreciate the efforts they made ‘d put into optimism. Those tools are still there, although you’re probably not going to have to lean on the Optimization tool as often as I had to, back in the day. In fact, it’s probably of note that the Honor 50 comes preloaded with fewer built-in apps than most of its high-range competitors.

As a final note, the Honor 50 is another victim of the recent anti-audio jack movement. There are USB-C headphones included, which is great, and you can – obviously – grab an adapter, but this still feels like a bit of an odd trend that is spreading through the industry quickly.

If you’re looking for a phone that can capture video and photos in a variety of interesting ways, can function well at night, runs games and media well, and has a pretty great battery then you can’t go wrong with the Honor 50 .

The Legend of Heroes: Trails from Zero Review

Spy X Family is everything we wanted it to be

I've spent much of the past few months watching depressing shonen anime in which a lot of people die. Needless to...
Read more
XBOX

Nintendo Switch Sports shoots to No.1 in eShop charts

Image: WB Games / KotakuThere's a video game coming out called Gotham Knights. It's about some kids from the Batman universe who band...
Read more