Many people who play Final Fantasy 7 become obsessed with a version of the game that does not really exist.

The game itself is a story about an arrogant and talented mercenary named Cloud who journeys through a fantasy world to stop Sephiroth, his former teen idol. Along the way, Cloud encounters two heroines: his childhood friend, Tifa, who unravels the truth behind Cloud’s identity and mysterious episodes, and the flower-seller Aeris, who actually stops Sephiroth from winning in the end. Even if you haven’t played Final Fantasy 7, you might know that, before that happens, Aeris dies.

One eternal question spans all of pop culture: “Who would win?” That’s why we’re dedicating an entire week to debates that have shaped comics, movies, TV, and games, for better and worse. Prepare yourself for Polygon’s Who Would Win Week..

You might also know that Aeris was supposed to be called “Aerith,” the ambiguous last katakana of her Japanese name EARISU, and just another fumble of Final Fantasy 7’s blurred, decontextualized translation. Or maybe you know that Aerith is Cloud’s true love? Or maybe you know, with equal certainty, that she is not, because that’s Tifa, and you can prove it. And this isn’t your personal preference — it’s about canon. Canon, here, is a weapon to load up and shoot. It’s fan-translated passages from tie-in novels (the official translations were done by biased liars), scanned screenshots from Ultimania guidebooks of these characters’ Kingdom Hearts cameos, and tweets from official Square Enix accounts promoting their new range of Final Fantasy 7- themed cafe food. In the end, what appears to be the least canon of all is the text of Final Fantasy 7 itself.

These narratives have been competing for over 20 years; Aerith vs Tifa, “Cloti vs Clerith.” Both sides paint the other side as uniquely toxic and deluded. I have strong memories of visiting an Aerith hate site covered in American flag GIFs because the owner witnessed the planes crashing into the Twin Towers on 9/11. Since then, terms like l33t, llamas and lemons have modernized into memes, SCREAMs and stanning queens, and Final Fantasy 7 Remake has added new tomes of Aerith and Tifa scenes to argue over — but it’s the same battle, running since 1997. 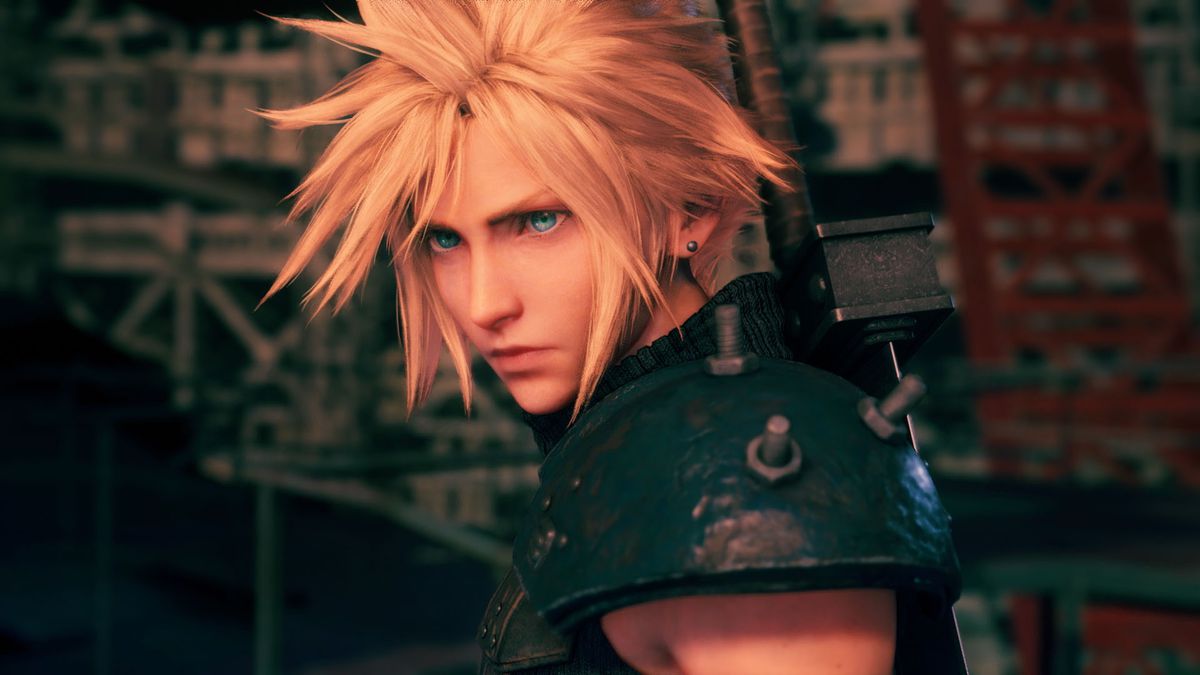 Batman’s at it, too. Robert Pattinson, the great mind and greater chef of the millennial generation, a man forced to spend his adult life caring about the Edward-versus-Jacob debate, described in a recent interview his fascination with Final Fantasy 7’s love triangle.

“It’s the two options of girls,” he said, as his The Batman costar Zoë Kravitz rolled her eyes. “Aerith … she’s like the really kind girl, she has superpowers to heal everyone … and then Tifa’s this sexy little thing, like a thief, in this short skirt. And Aeris, right at her peak, gets killed! This is how every guy figures out what love is.”

“Either the one that’s gonna heal everything,” Kravitz wondered, “or the one in the short skirt?”

If Batman is getting involved, I am forced to put on my lipstick and attempt the magic trick of making this love triangle disappear. Because I don’t believe that Final Fantasy 7 has a love triangle. Cloud’s relationship with each woman is romantic in tone and important to the plot — but, outside of one or two incidental scenes, there’s no conflict between the girls over Cloud, and no suggestion that Cloud needs to “pick” one. The story doesn’t follow the simplistic template of the YA love triangle or the pervy burlesque of the ’90s harem anime; even the game’s dating sim element (an overemphasized aspect that would later form the backbone of the dialogue-choice romances BioWare became so celebrated for) feels more like a developer in-joke than a serious plot point.

Canon, here, is a weapon to load up and shoot.

In my attempt to figure out where the idea of ​​this love triangle originated, I fired up the Wayback Machine and delved into the Final Fantasy 7 fandom of the past. By the mid-2000s, transformative fandom — fanfic writers and fan artists, and Cloti and Clerith shippers — had fled to proto-social networking sites like LiveJournal, while fandom’s archivists and armchair critics squabbled on wikis and bulletin boards. But at the turn of the millennium, before the internet was six apps and a billion shops, there was no boundary between these two styles of fandom, with both cohabiting on eccentric personal sites (called “shrines”) stuffed with enthusiasm, essays, fanwork and in fact. Kids coming online for instructions for breeding a Gold Chocobo at, say, Icy Brian’s RPG Page, would find most of the site dedicated to fanfic; others, wanting to brush up on lore for their CloudxAerith epic, might find it alongside stats for both characters’ weapons. Official material was presented next to doujinshi (fan-made manga, often erotic), and many readers lacked the cultural literacy to even understand that the fanwork was not officially sanctioned. 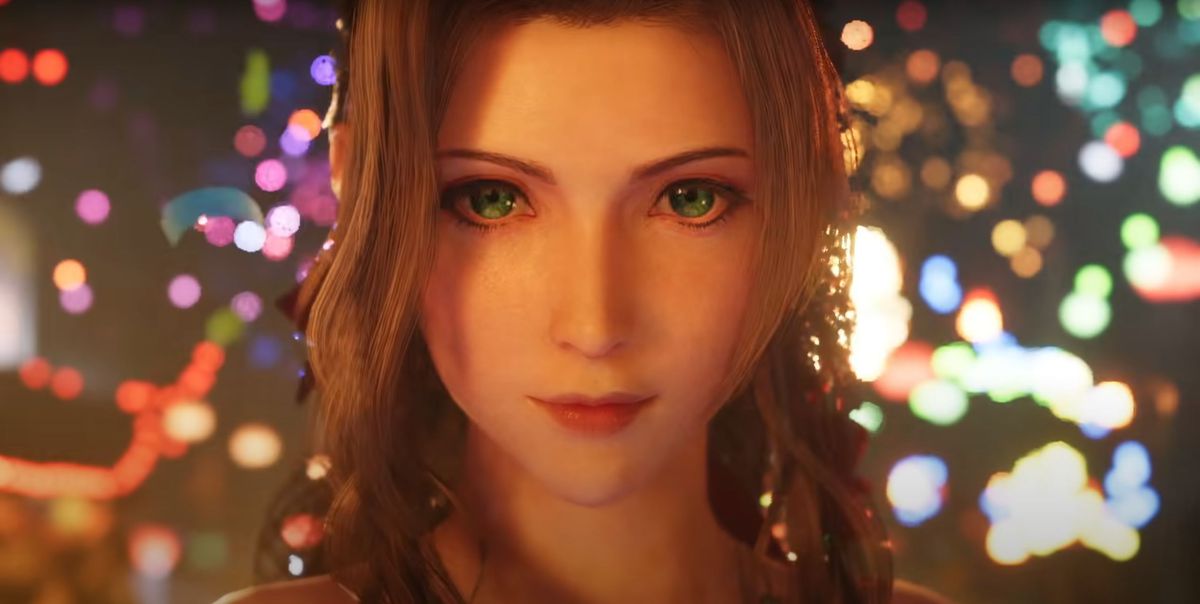 Compared to today, the early-’00s internet was a world free of guardedness. Users expressed their feelings without any layers of irony. With spaces controlled by the pseudonymous users, the worst someone could do back then was leave a flame in your guestbook. Today, these unguarded words are the Rosetta Stone for the ship war.

“Let’s put it this way: only if she was real, she is a pure bitch,” screams Aeris In Hell, an anti-shrine maintained on obscure internet host internettrash.com (which is somehow still working, after a fashion, frozen in amber the day that Dee Dee Ramone died). The site’s author goes on to insult Aerith for trying to take Cloud away from Tifa. “Another damsel-in-distress smoked the carpet. Why do they just have to be so girlie? She’s mental. […] A skanky, retarded, butt-ugly ho.”

AngelTifa84, webmaster of Anti-Gainsborough Establishment, resents Aerith’s fans complaining about “what [Tifa] wears, not taking a look at their ‘goddess’ and how she dresses (with that slit),” before calling her “trashy.” All that remains of Tifa Haters Anonymous is a reference to Tifa’s “big airbag boobs,” while the Comic Sans weeb manifesto Japanese Culture and the Love Triangle of Final Fantasy VII launders its judgments via Orientalism, insisting the Japanese see Aerith’s ribbon as a symbol of true love, while Tifa’s black skirt represents misfortune.

The debate over Aerith versus Tifa is about the correct way to be a woman. It’s a debate about the short skirt versus the long skirt; the submissive girl versus the flirt; the nurturer versus the fighter, with these traits assigned to each girl based on their body and clothes, not their actions. Zoë Kravitz was right to call out Robert Pattinson’s dichotomy as sexist — but she had no idea that he’d got the girls’ personalities wrong. Tifa is a physical fighter in a mini-skirt defined by her brittle confidence and supportiveness, while Aerith is a magic-user in a long skirt who is foolhardy, mischievous, and a little insensitive. 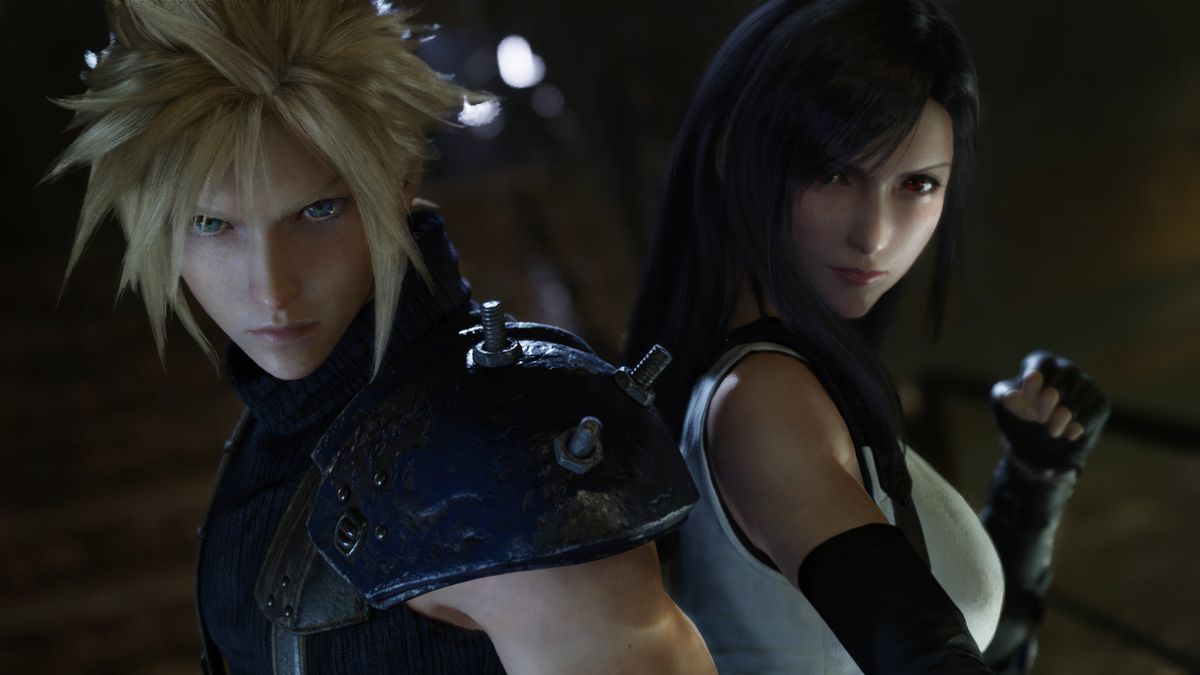 I’m not calling Official Cloud x Tifa Petition webmaster Tifa Strife or Batman a misogynist . But from birth, we have all been basted in a million stories where the “good girl” gets rewarded with the man while the “bad girl” ends up alone or dead. Final Fantasy 7 ship warriors are obsessed with which girl ends up with the hero, because we have been taught that if she does, she is the better woman. Aerith isn’t just herself — she’s also Lenna and Rosa and Yuna and Terra and Elly, part of a lineage of pure healing princess girls with staves. Tifa, on the other hand, represents forcefulness and sexuality, like Kid and Celes and Lucca and Layla and Ayla. Bolstered by the same anime industry that responded to the success of Neon Genesis Evangelion by cloning a million aloof Reis and hot-and-cold Asukas with all their fury and sexual subjectivity edited out, Japanese media fandom has always loved identifying a type and using it , not as a lens, but as a box to lock stories into.

And Final Fantasy 7 couldn’t be a better canvas for anxieties. A game made in a year — six months to carve the tools, six months to build the whole thing — it glitters with shonky spontaneity. It’s stuffed full of kitchen-sink maximalism and demented grandeur, but it’s also abstract, never coalescing into the Botoxed literalism of later Final Fantasy titles. It invites you to play with it by making its characters look like toys, knocking them into each other over a silicon slideshow of half-dreamed movie and manga imagery; its text-only dialogue melts into gibberish when the overworked and under-resourced translator loses the subject of the sentence.

Final Fantasy 7 is the shadow of a grand adventure, cast onto a medium too small. The role-playing in the game takes place outside of the screen, when the player falls into the lull of the patchwork visual and textual language and begins to tell themselves stories about what is “really” happening. And once you start telling yourself stories, you exaggerate whatever is in yourself already — you make it cartoon-obvious, like that algorithm that turns photographs into a psychedelic whirl of weird dogs.

So which girl is Cloud’s true love? Both of them. 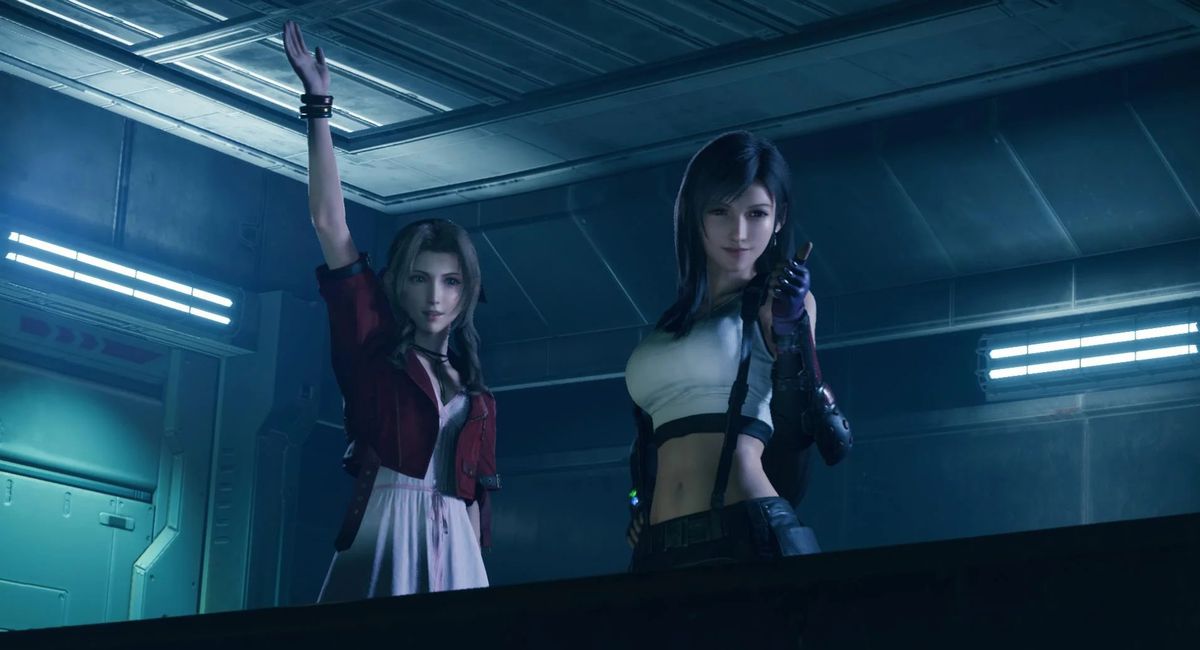 Tifa shaped him, a formative childhood friend who then gave him his fake identity via a magical sci-fi contrivance that functions as a metaphor for Cloud’s off-base beliefs about what she wants him to be. She helps him unravel this, and after they spend the game obsessing over each other as children, the sex they have under the Highwind is the two finally getting to see each other as adults.

But, before this, Aerith lances Cloud’s protective blister of machismo, laughing with him at his mean jokes and fitting him into a wig and dress. She asks to meet the “real” him, and Cloud returns the favor by remembering the real her, after her death. Disgusted by the idea that she’ll only be remembered as an empty, smiling void, he recalls the independent and flawed person who planned to stop Sephiroth, puts her plan into practice, and is rewarded by an encounter with her spectral presence.

And then Aerith’s hand becomes Tifa’s material hand; as they cling to each other, Tifa and Cloud both agree that, after death, they’ll see Aerith again. Cloud has no choice to make. His love of Tifa helps him recall why he loves Aerith; loving Aerith healed the affectations that prevented him from loving Tifa. The girls never compete over him — they love each other, too. Thinking he’s “with” one girl more than the other is missing the point.

Just like Cloud Strife, who in the story reimagined himself into a fake hero modeled after every bad idea pumped into him, we rewrote the game based on our prejudices, and how little we trusted pop culture to have anything new to tell us. We scrambled for canon’s authoritarian comfort, convincing ourselves the developers were sending coded messages about the official true love via tie-in branded packets of Batchelor’s Pasta ‘n’ Sauce. And at the bottom of it is a remarkable game we never even respected enough to read for what it was — a story just a little different from the conventional shape.

Dead Space remake: Where to find the Peng treasure

Genshin Impact 3.5 brings its own version of Pac-Man in new event leak

The latest Famitsu readers most wanted charts have come through from the land of the rising sun and there's a brand new No.1 this...
Read more
Games

World of Warcraft: Dragonflight’s talent trees getting a major rework

World of Warcraft: Dragonflight will finally whisk players away to the Dragon Isles, where they'll be able to roll new Dracthyr characters...
Read more
Reviews