Elden Ring has plenty of difficult bosses, and the first one you’ll likely face is Margit the Fell Omen. Polygon’s guide for beating Margit includes tons of helpful combat tips, but our guide — and many other Elden Ring guides — lacks one key piece of information. What level are you supposed to be in order to beat Margit?

The short answer is around level 25. The longer and more accurate answer is that it all depends on your play style and how patient you are. The higher level you are, the more powerful you’ll be; if you play as a melee combatant and add points to Strength, for example, you’ll deal more damage and the fight will be over faster.

If you want, you can fight Margit almost immediately. Elden Ring’s massive, sprawling open world lets you explore just about anywhere right out of the gate. You can run straight to Margit while still wearing your very first armor set, facing off against him before you’ve scarcely leveled up at all.

That’s what I did. I didn’t love it, and I don’t recommend it.

I’m playing as a Hero class, so I started out with an ax and shield. I did manage to meet Melina before I ran into Margit, so at least I had the ability to level up (plus, I got my pet horse). I ran by most of the enemies on the way to Margit, and I believe I made it to him before my level had even reached double digits. I didn’t have the Spirit Calling Bell or any summons. Heck, I didn’t even have a Crafting Kit, let alone a Remedy to summon an NPC to help me.

What I did have was a lot of experience playing Dark Souls, and a lot of patience. I spent my time watching Margit’s attack patterns, rolling and back-stepping, and going in for the hit only when his back was turned. The problem was, every time I managed to hit Margit, I’d deal barely any damage at all. It felt like throwing individual pieces of straw at a very tough camel, and I could tell it was going to take a hell of a lot to break its back.

Like I said, I’m patient — but I could also tell I wasn’t supposed to be there, and the game would only get harder from here. So I surrendered, figuring that I was supposed to level up a bit first. I didn’t think it would take me long. But then I asked other people how long they’d waited before fighting Margit, and I was shocked to learn that many of my friends and colleagues didn’t beat him until they’d explored the way more of the game.

I resolved to enjoy some exploring; I beat some Evergaol baddies, cleared out all of the Weeping Peninsula, and snagged way better armor along the way. I got all the way up to level 30 before bothering to hit up Margit again, with my Battle Ax leveled up to +5 and my pet jellyfish leveled up to +1 with Roderika. When I faced Margit again, I even summoned the NPC Rogier, pulling out all the stops. It felt good to be not only strong enough but stronger than I needed to be.

I wondered: What about Elden Ring players who had a different play style, character class, and loadout? What level did they recommend for beating Margit? I asked my coworkers to weigh in with their own stories of defeating this boss, and although all of our character classes and weapon loadouts are different, we all agreed that it helps to get past level 20 and make use of summons. 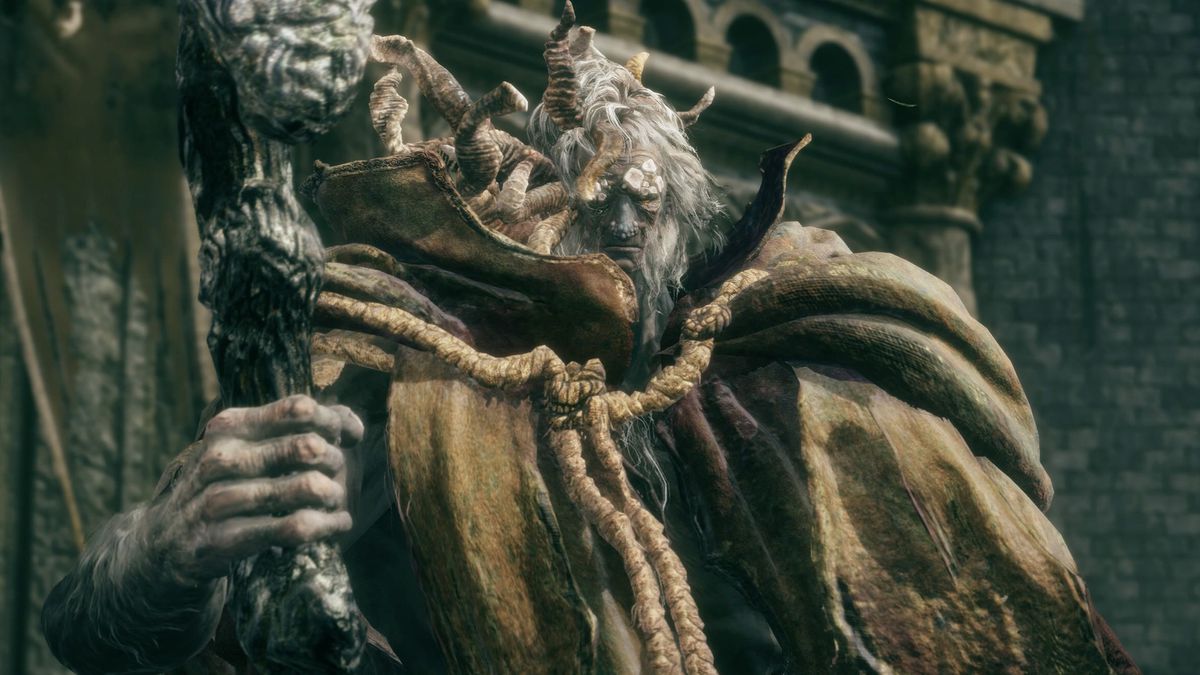 “I was a melee-skewed Confessor, level 26-ish, weapon at a +8. I summoned Rogier and Aurelia the Jellyfish with no regrets. I played really aggressively the first half of the battle, while Rogier and Aurelia were taking hits and being distraction. They both die not long after the second phase pretty consistently, so I would switch to rolling through damage, staying close enough to tap him with my sword after long attack strings, and occasionally distancing myself to heal and pick at him with magic.”

“I beat Margit pretty early on, probably about level 20-25. I am playing with the Samurai class and had the starting loadout, with the sword upgraded to probably +2 or +3. I beat it on my second try, and that is solely because
1.) I used both the wolves summons and the ally summon located right before the fight, and
2.) I had a friend, our colleague Austen Goslin, spectating me on Discord and giving me tips.
I just let Margit wail on the summons while I opportunistically did damage until he died.”

“I beat Margit at level 26 with a Bandit build, dual-wielding the Demi-Human Queen’s Staff in the left hand and the Reduvia Blood Dagger (both were acquired by defeating separate enemies). I switch my left hand between staff and dagger, depending on attack pattern and FP left. Most of my points are dumped into Dexterity and Arcane (Arcane skills up the blood dagger), with Intelligence, Vigor, then Mind as my next categories.
To beat Margit, I used Lone Wolf Ashes to distract him, and alternated blitzing with Glintstone Pebble magic plus dodging and following the attack pattern to where Margit pauses, in order to get a few hits to the back and build up blood loss. This got him down about three-fourths of the way fairly painlessly. After running out of FP, I switched to dual blades and did a mix of kiting, dodging, and slashing for the final fourth — which was more challenging (and more fun, to be honest).
Took about 15 attempts total. On my first tries, I wasn’t really using magic, and I was level 21. After dying 10ish times, I rune-farmed five levels (adding 3 to Intelligence, 2 to Mind), and it was much easier.”

By now, you're probably aware about Capcom Fighting Collection. Capcom had announced it earlier this year, in February. The game is a...
Read more
Nintendo

Bernie Stolar who helped launch the original Sony Playstation in the United States and the SEGA Dreamcast in the US has sadly passed away...
Read more
PC Gaming

It'll be a while before we get our hands on the modernized version of Geralt's first RPG...
Read more
Tech