While there’s something a little unsettling about an autonomous scooter having a go at the rails around town, Touchgrind Scooter does grow on you after a few tries. Part of the popular Touchgrind series and definitely one of the more peculiar ones in my opinion, the mobile sports game lets you (or rather, your human-less scooter) flip through the air across vibrant cityscapes to reach that sweet, sweet high score.

The goal is simple – perform tricks with your scooter, get a high score, and nab those ultimate bragging rights so you can rub your win in your friends’ faces. But while the mechanics of Touchgrind Scooter might seem easy enough, the odd two-finger controls complicate things a little bit.

To move your ghostly scooter along, you’ll have to place two fingers on it and maneuver across the screen. It does take some getting used to because, for the first few runs, I couldn’t for the life of me figure out where the proper finger replacement should be. It also doesn’t help that the game isn’t playable on my tablet for some reason, so I was forced to squish my fingers on the tiny screen of my phone all while trying to get a good look at the path in front of me .

Speeding through the streets already poses an inherent challenge solely because of the odd control scheme and the limited view. With your fingers blocking half of the screen, it’s a little difficult to get your bearings and see what’s up ahead as you speed into ramps and rails.

GAMEPLAY AND MUSIC OF TOUCHGRIND SCOOTER

Of course, once I did get the hang of it (after many, many wipeouts), it did start to feel a little intuitive (I ended up holding my phone with both hands and using two thumbs to move my scooter). You can perform sick stunts like tailwhips and barspins as you soar through the air across various locales. Hitting certain target scores unlocks more locations and gear, adding loads of variety to the game.

Now, for this review, the kind folks over at Illusion Labs were generous enough to send me a few codes to unlock standard, epic, and legendary goodies. They’re purely cosmetics, but I have to admit – watching a scooter-fied banana do a 360-degree flip in the air while a stuffed t-rex hangs on for dear life on its handlebars is pretty exhilarating. 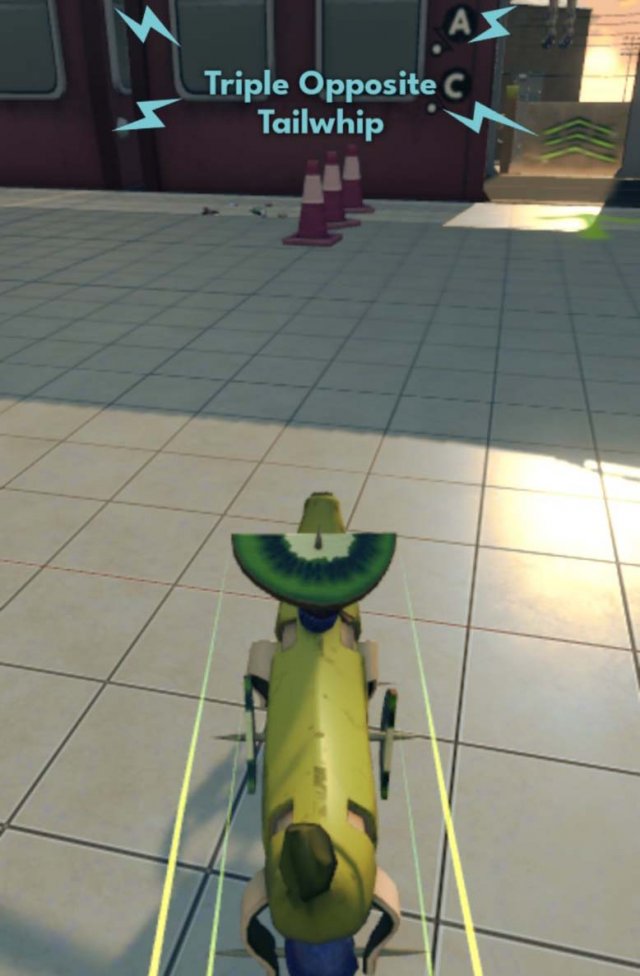 The visuals are top notch, and I particularly enjoyed the background music. The cool beats and adrenaline-pumping melodies add to the fast-paced action of every stage. After completing challenges and clearing stages, you can also rank against other players and see how you’re doing in your city, country, and across the globe.

Touchgrind Scooter is a pretty feel-good game as it’s extremely satisfying when you land perfectly after a stunt-filled sojourn in the air. It does, however, have more frustrating moments than rewarding ones, as there are plenty of ways you can wipe out after every ramp. You do respawn a few times so it’s pretty forgiving, but it hurts your overall score if you keep failing to stick the landing.

To me, the game is good for a stage or two, but it doesn’t really have anything that makes me want to keep playing (or keeps me from putting it down). It just feels like there’s too much visual flavor but not enough actual content, and while hitting target scores feels great, the elation dies down shortly after. In the end, perhaps this kind of sports title simply isn’t my cup of tea.

NFS UNBOUND – 5 Tips That Will Make Your Life EASIER...

Seeing wild Pokémon would be terrifying in real life

US: Nintendo announces the Multiplayer Sale for Switch eShop

Level up your next get-together with a limited-time offer on a variety of Nintendo Switch games in the Multiplayer Sale! Starting now until...
Read more
Playstation

Apex's newest Legend is ready for the Arena, and the game's got a new trailer to show off his many shielding abilities....
Read more
Playstation

News Today NIS America announced that it will release Yomawari 3 in North America and Europe with the title Yomawari: Lost in the Dark. Published on...
Read more