As a huge DC Comics fan, I’ve always lamented the fact that there aren’t really any good and recent mobile games about my fave heroes in capes and cowls. Thankfully, DC Worlds Collide does deliver, in that it keeps the comic book geek in me satisfied with all the fan service. Now, I know I can’t really let my love of Batman and the Bat-family color my review, which is why I tried to go into this with as impartial a lens as I could.

Of course, the fact that I immediately pulled Nightwing from the summons pool as soon as I got my first ten pulls made it infinitely harder for me to keep up my unbiased opinion.

THE STORY OF DC WORLDS COLLIDE

As expected, DC Worlds Collide stays true to its name in that worlds, well, collide. It’s pretty much standard fare by now to have multiverses collide with each other as an excuse to create a catastrophic event where heroes and villains have to band together to survive.

Still, the main big baddies here are the members of the Crime Syndicate, which is pretty refreshing, in my opinion. It’s a joy to see Ultraman be an actual force to be reckoned with, and I adored how Harley Quinn wasn’t the center of attention for once (I’ve got Harley fatigue at this point).

Batman being Batman is, of course, leading the cause, recruiting allies and coming up with plans to save the world as he does. This sets you off on a multiversal quest across iconic DC locations like Themyscira and Kahndaq, encountering both friend and foe alike.

Typical of the genre, you’ll fight auto-fights and gather idle rewards even when you’re logged off. There’s your standard roguelike dungeon and your endless tower, but there’s also an exploration mode where you can pick up some valuable loot by combing through ARGUS institutes and beating up not so bright henchmen. I found this to be incredibly unique, as well as the way the dungeons are named as fan service (Elseworlds, Mogul’s Warworld, and so on). 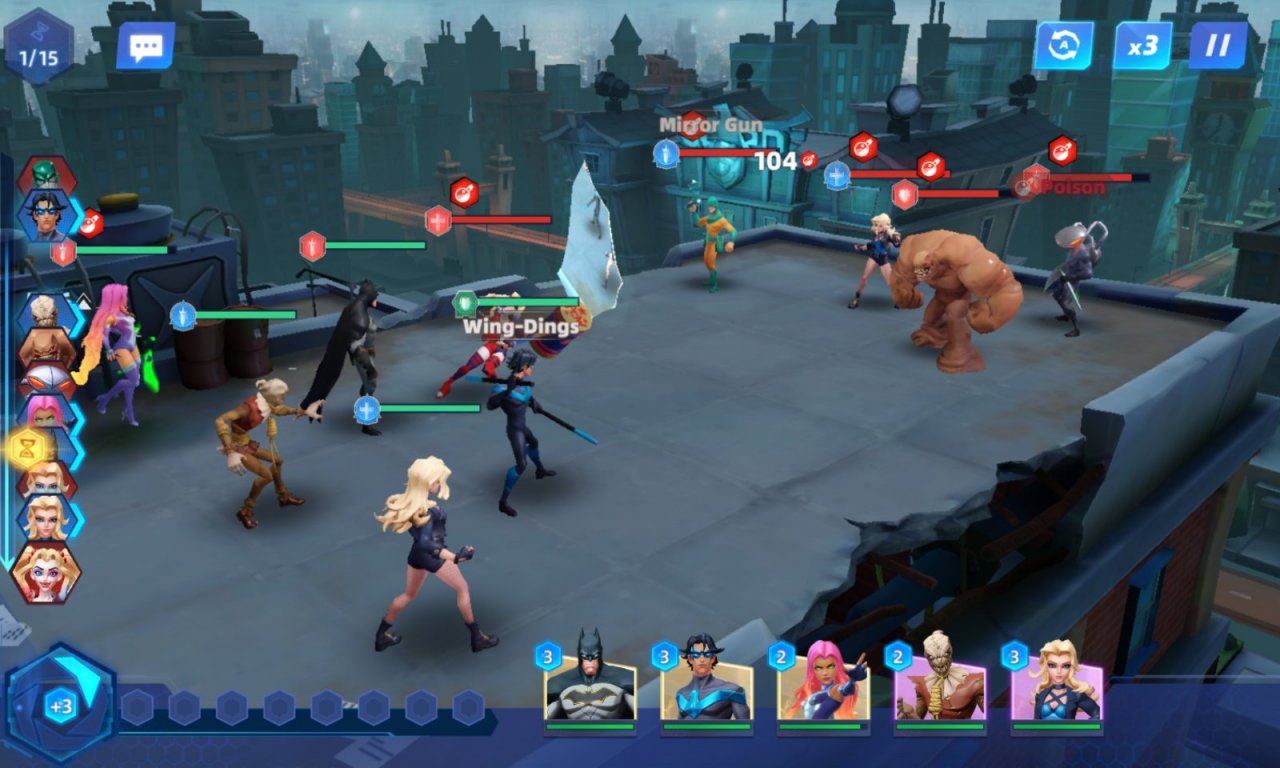 I also found the cut scenes to be quite a treat, as they’re fully voiced and with stellar vocal performances at that. Skill animations during battle are also top-notch, and I love the bright and vibrant character designs (both in 3D and in the 2D portraits).

Another thing I found refreshing here is the way you can set up your Ultimate skill in order of priority during combat. While most idle games only let you strategize the best formations to win, here you can also re-arrange the order of your characters’ Ultimates, and it really does make a huge difference. I can’t tell you how many times I won a match where the enemy’s combat power was twice greater than mine, and a simple reordering of my Ultimates got me that sweet, sweet victory.

Of course, you also have your typical classes (Nightwing is a tank for some reason), as well as attributes that are weaker or stronger against another in a rock-paper-scissors kind of mechanic. All these add to the strategic elements of every battle, keeping things spicy despite the auto function.

To be honest, gacha games nowadays almost always feel like simple reskins of a certain template – and I totally understand, because if a formula works, then why fix it, right? This is exactly why I have a soft spot for games that try to at least do something different, or add a small twist to somehow make a title truly their own.

With DC Worlds Collide, there’s a huge opportunity to use the vast number of IPs at their disposal, and I don’t think they wasted their chance. Every part of the game makes me feel truly immersed in the DC universe, and at the end of the day, all I wanted was to collect the full roster of characters from the Mother Box. 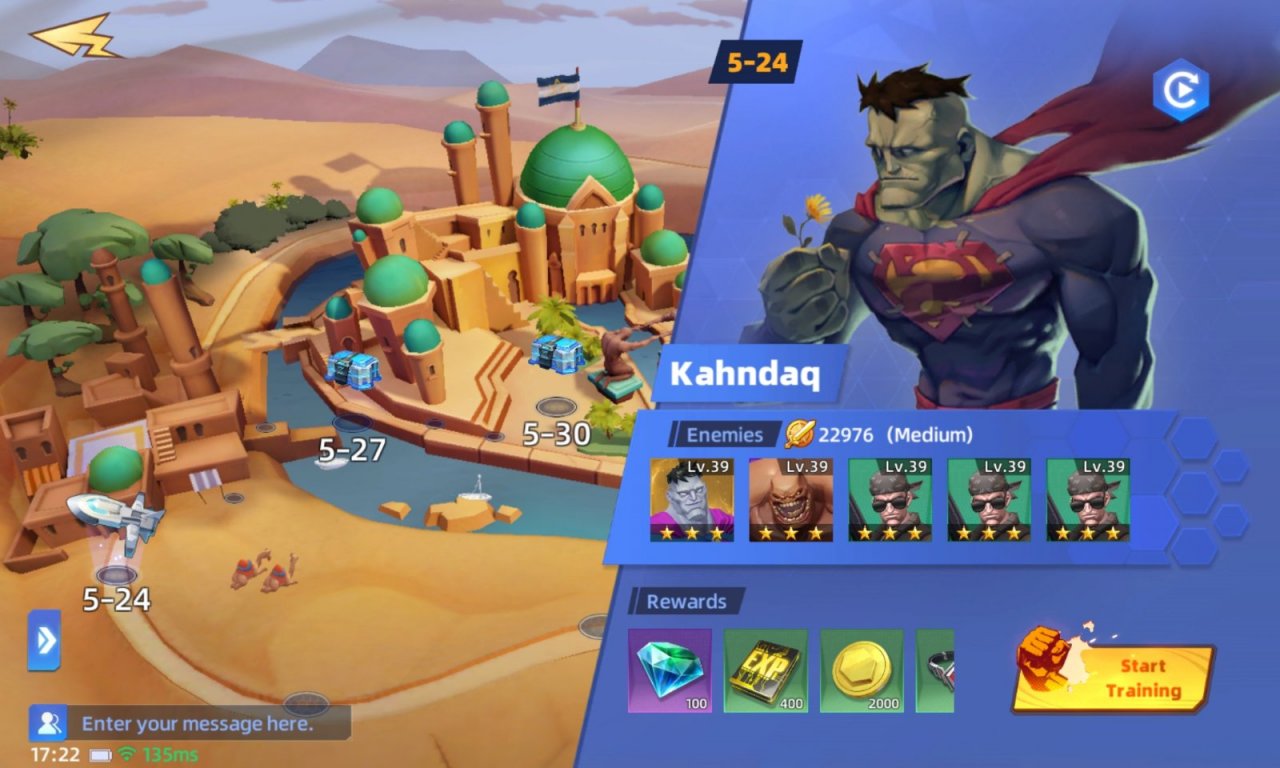 Thankfully, the game doesn’t feel pay-to-win, and it’s relatively quick to gather enough in-game currency to pull from the summons pool. One thing I didn’t like, however, was the fact that you had to level up characters up to a certain point before you can progress. For instance, in Stage 5-24, having at least four level 40 characters is a prerequisite before you can even start the fight – which can be a little tricky since the material needed to break through every ten levels isn’t as easily acquired.

Overall, the game does a great job at appealing to both DC fans and non-fans alike, in my opinion. It may not be entirely groundbreaking, but it at least has enough elements to set itself apart from other titles in the genre.

Kena: Bridge of Spirits on PC 2021 was a rather interesting year for gaming and the industry. New World was released on PC,...
Read more
PC Gaming

Every Tuesday, Marvel Snap tees up a new featured location. While a location is in the spotlight, it'll have a higher...
Read more
Games

September is starting strong with the re-remaster of one of the best games of all time. The Last of Us Part 1 features...
Read more