In 2019, publisher Smilegate released Lost Ark, an action-MMO that quickly skyrocketed to the top of Twitch lists and attracted the attention of players across the globe. It was a bonafide phenomenon.

However, access to the MMO was mostly limited — it was only available in Korea and Japan, and several months later, through an open beta in Russia. Still, the latter was many players’ ticket to the show: I myself first played Lost Ark through a VPN, putting up with the beta’s rough auto-generated translations as I pored over the endless intricacies of a game I would come to know intimately. Now, the action-RPG is available in its full form in Europe and North America. I’ve played over 90 hours of it, and I haven’t looked back. I’m enthralled and excited for the future content on the way.

Lost Ark is an action-RPG nested in the framework of an isometric MMO. And while it looks and feels like a Diablo clone on the surface, it’s a much more involved game, one that requires patience and dedication to understand its ultimately rewarding systems.

Take its character classes: Lost Ark has a total of five, several of which branch into more advanced variants once you’ve leveled up significantly. The Warrior, for example, has three subclasses to select from, including the damage-focused Berserker, the support hybrid Paladin, and the tanky Gunlancer. There are no dedicated tanks or healers in Lost Ark, and it makes the game better for it. Each subclass has an entirely unique play style, which makes end-game content all the more exciting.

Unfortunately, character classes are locked to gender as of now, which is a shame, since I would have loved to play as a male Mage. The Korean version of the game has slowly begun to implement other versions of gender-locked classes, with the female Berserker somewhere on the horizon. It helps that the character creator, while not as impressive as those in Korean MMORPGs like Aion or Blade & Soul, is more inclusive — especially in terms of skin colors, which are managed by a hex code or color wheel instead of pre-selected palettes . But with a game that encourages a variety of play styles, it’s a shame that the character creator and gender-locked classes impose restrictions upon its player base.

Each of these classes comes with an origin story that largely takes a back seat to the overarching narrative, which is a serviceable, but ultimately generic tale about good versus evil. Unfortunately, the story is also dragged down by bad voice direction and inconsistent localization. Subtitles often don’t match what characters are saying in voice lines, and quest objectives are sometimes explained in weirdly obtuse ways. The story does gain more momentum once it starts digging into the backgrounds of the demon-priest Armen, the valiant Prince Thrain, and the otherworldly Beatrice, but in the end, it’s less concerned with vivid storytelling and more with facilitating the game’s fantastic action.

Speaking of: You spend most of your time pummeling waves of demons into the dirt, or parkouring across terrain in the style of Devil May Cry. As in most RPGs, leveling up unlocks new and devastating ways to juggle, counter, or combo your foes. However, Lost Ark takes this kineticism a step further, and allows players to allot unique passive abilities into individual skills. While playing the Paladin, for instance, I granted an attack buff to the Wrath of God ability. The result is a massive explosion of lightning that also happens to grant my allies increased damage. You also can slap element buffs, extended combos, modifiers, and decreased charging timers on your attacks. All in all, Lost Ark offers you various avenues to tailor your characters to your sensibilities.

There are plenty of quality-of-life features attached to the character classes, too. You can edit passives and swap around skills at any time, and save your favorite presets to seamlessly jump between them in the field or in dungeons. I found myself constantly switching between elemental effects on my Sharpshooter, balancing lightning and explosive damage depending on the situation. On the other hand, I stuck to a mostly support-focused build on my Paladin, swapping out shields and healing for paralysis immunity, when the occasion called for it. 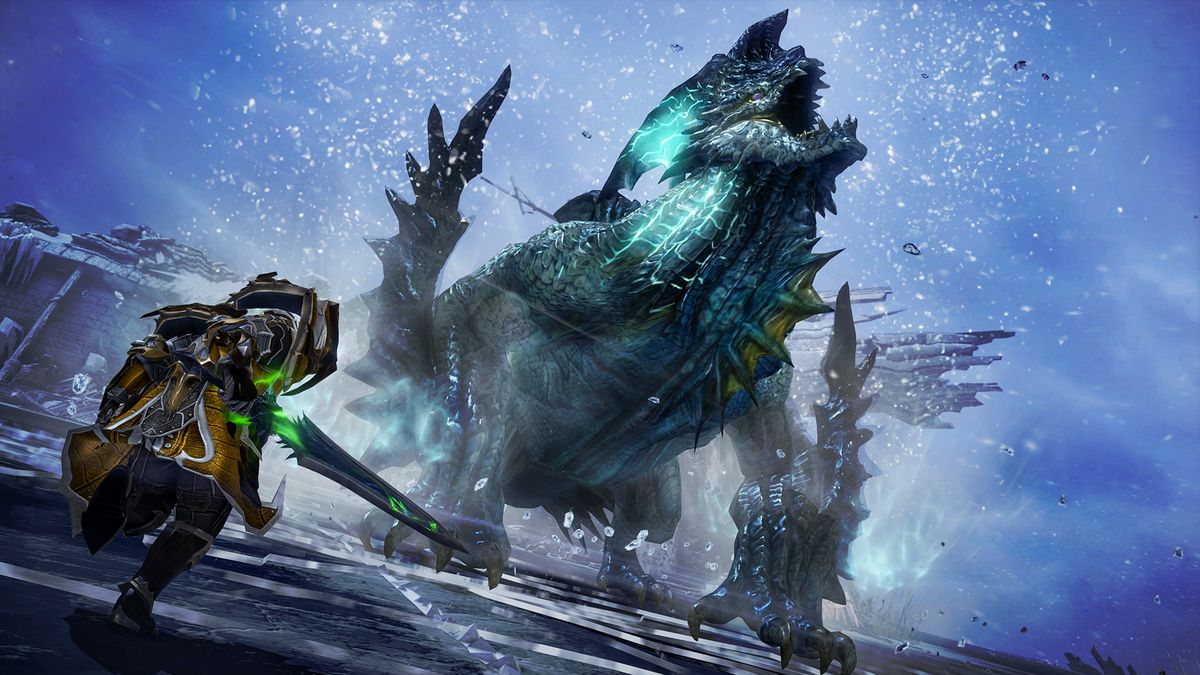 Lost Ark’s character mechanics and combat unfold at a steady pace — the grind to level 50 teaches the basics — but the endgame is the true challenge. It can be a bit grindy at times, but it never stops feeling rewarding, especially since the combat-focused content feels more involved than most games of its ilk. New bosses appear, whose complex attack patterns require precise timing and deep understanding of specific combat mechanics to defeat. Chaos Dungeons unleash waves of enemies, granting gear and valuable honing materials after each level. And the Raid content, which I find the most exciting, emulates a smaller, more contained experience a la Monster Hunter. Players locate their mark of choice through the use of flares, and can only use a limited amount of potions to recover their health. This makes these encounters all the more challenging, but all the more worthwhile. Which is all to say that, while many RPGs struggled to offer meaningful endgame content, it’s in this precise area where Lost Ark thrives.

What’s more, Lost Ark isn’t a game where you constantly need to be playing to reap rewards — the “Rested” experience bonus kicks in once you’ve stepped away from the game for a while. The more rested experience you have, the more likely you are to get rare drops from late-game events. As someone who has very little free time, I love this system — I never feel left behind, even as my friends play without me. It’s another welcome layer to Lost Ark’s endgame nuances.

And I haven’t even mentioned naval travel, field bosses, or timed battles. In its sheer breadth of content, Lost Ark is gargantuan, and learning its intricate systems means being rewarded every step of the way, for a very long time. As it stands, after 90 hours, I have completed roughly 40% of each region, and have multiple characters well into the second tier of endgame content.

Unfortunately, with so much content comes a cloying number of currencies. You can obtain silver and gold merely by playing the game — but earning Royal Crystals requires real money. And crystals are the most convenient path to Pheons, another type of valuable currency. Parsing through these currencies is a chore unto itself, and Lost Ark would benefit greatly from cutting these down.

But still: With all of its endless intricacies, its variety of end-game content, and of course, its stylish action, Lost Ark feels like it’s destined to remain something of a phenomenon for quite some time. Getting to the endgame can sometimes feel like a chore, and the game’s economy can be a headache unto itself — but the rewards upon arrival are worth the trek several times over. Smilegate and Amazon have managed to sustain interest in the title with its full release. However, the true test lies in keeping that momentum going.

Lost Ark was released on Feb. 11 on Windows PC. The game was reviewed on PC. Vox Media has affiliate partnerships. These do not influence editorial content, though Vox Media may earn commissions for products purchased via affiliate links. You can find additional information about Polygon’s ethics policy here.

Free Steam Decks given away during The Game Awards 2022

The Mystery Of Destiny 2’s Pirate Pun – Iron Banter: This Week In Destiny 2

Just about every week brings something new to...
Read more
Games

Ascension Tactics and all the new board games to buy, support in March

Late winter is good for one thing: spending time inside, warm and dry, playing new board games. We've rounded up the...
Read more
Games

polygon's Patch Notes is a weekly newsletter that tells you about the best stuff to watch, play, and read. We wanted...
Read more
Nintendo

Infinity Strash: Dragon Quest The Adventure of Dai was officially announced quite a while back, but we had yet to fully see the game...
Read more