Disclaimer: The mobile port of Alien: Isolation offers haptic feedback that tells players when they will switch from walking to sprinting. However, this review was played on an iPad so this feature was unavailable during our test. Additionally, Feral Interactive responded stating they’ve included Auto-Aim and Aim Assist in the release to help with targeting enemies.

Among all of the admittedly subpar video games that spawned from the blockbuster franchise Alien, Alien: Isolation has been the one diamond in the rough that shines as an inspiration to all movie tie-in video games. Now, I am sure that phrase fills players and, indeed, moviegoers anywhere with a sense of dread and trepidation.

The expectation is that you will usually encounter one of two flavours; There are the bland cash grabs that just latch onto a movie’s popularity to pump out a generic but overall inoffensive game to bring in some easy money. Look at any of the “Transformers” games from the Michael Bay era.

Or, much worse, you have the “oh god, what is this monstrosity? Burn it and the movie it came from just get it away from me” flavor. Let’s pick an obvious punching bag for this second type, “ET The Extra-Terrestrial”, a game notoriously so bad that they simply buried a bunch of cassettes of it hoping to forget about the whole thing. Alien: Isolation bucked this trend in the best way possible, and now the stealth masterpiece is available for players to download on iOS and Android.

For those of you that did not play the original, it’s set 15 years after the original Alien film and tasks you with playing as Amanda Ripley, the daughter and exact copy of series protagonist Ellen Ripley. Amanda is invited along to the salvage ship Anesidora, which has recently located the flight recorder of the Nostromo, the ship from the original film. What is supposed to be a quick and easy recovery of this recorder almost immediately falls apart as there is an unknown predator stalking what remains of the ship’s crew, all of whom have now split into facts and will shoot at anything that looks vaguely suspicious.

Seeing as the player is working alone on the ship, surrounded by hostile groups of humans, who are in turn, also being stalked by an alien intent on sticking its claws through anyone it can find, you mainly rely on stealth to try and survive long enough to get off the ship. You can find various tools to assist with this endeavor, ranging from a motion tracker, to know which direction to run away from, to noisemakers so you can distract that rather mean-looking bloke with a big gun up ahead. This is precisely what you will be wanting to do because the touch screen controls on the mobile version can be a bit of a handful. 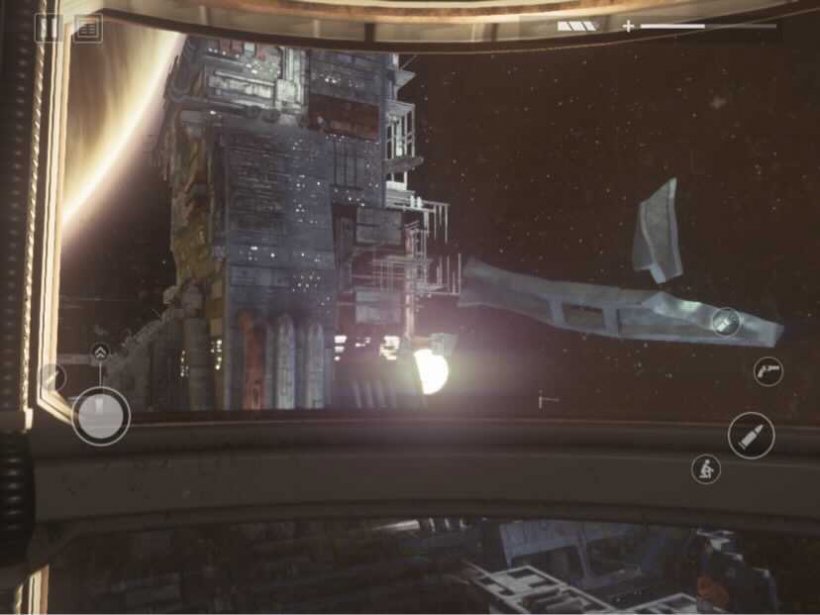 You move around with the standard two thumb setup; you have the virtual joypad on the left for your movement, and then you swipe around on the right to look around and aim your weapons. Both of these work well so far as they are functional, however, I personally found issues with just how sensitive they were. Your speed is determined by how far you push the joypad forward, however, the threshold between walking and sprinting is fairly small.

This is normally fine, but when you are crouching and trying to be as inconspicuous as possible, but accidentally push that joypad a bit too far as you try to will the door closer you are suddenly no longer crouching. You are instead now automatically sprinting at full speed, and whilst Alien: Isolation does boast some excellent AI, even a game with awful AI would have its enemies notice this and subsequently eat you. I looked in the settings extensively and I could not find a way to turn off either the auto sprint or the automatic crouch cancelling.

Another issue I had was with aiming sensitivity. When I first loaded up the game and tried to turn left I was spinning like a ballerina. Even after turning down the trackpad sensitivity to the minimum I still found it a bit difficult to get precise movement whilst aiming, which when you find yourself encountering gun-toting enemies is not an ideal time to be busting out that “Saturday Night Fever” impression as you trying to get the reticule to go where you want it. Your enemies will probably enjoy the show for about two seconds before they get bored and decide to shoot first. 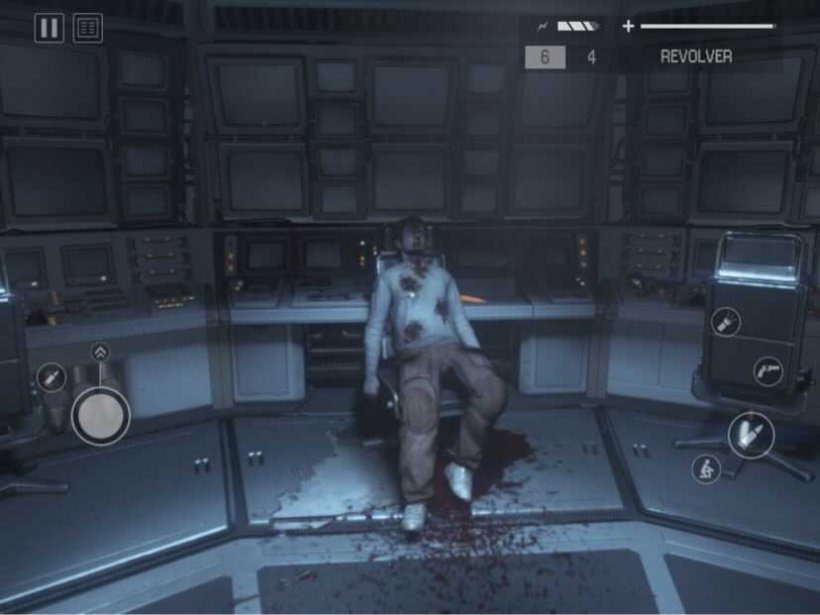 These two problems however are nothing compared to the biggest problem I found; atmosphere. The main reason survival horror games thrive is because it makes the players feel genuine emotion. You are scared of the shadows because something could be hiding there, you are afraid of opening that door because of what could lurk behind it, you are afraid of accidentally hitting that empty tin can because even the slightest noise can cause the big bad to burst through that wall and give you a heart attack.

This is why we play these games, and while playing on a tablet I did not feel anything close to that. It is hard to get drawn into the atmosphere when it’s on a smaller screen, and even harder still when you are trying to get that terror from a screen that permanently has two thumbs in the way.

Feral Interactive did a very just job translating most of the controls down to a phone/tablet screen and you can survive with the sensitive controls. You could even play it with a Bluetooth controller instead and avoid these problems completely, however for me I can’t help but feel like you lose some of the atmosphere that Alien: Isolation was so heavily applauded for when playing on a smaller screen.

Onimusha games have been released by Capcom for roughly 20 years now, with a couple of them seeing a release on a Nintendo console....
Read more
PC Gaming

The next League of Legends champion, Bel'Veth, is one of the most unusual champions on the game's enormous roster. She's an...
Read more
Playstation

News Atlus released another daily trailer of the upcoming JRPG Soul Hackers 2, focusing on some of the demons that will be featured in the...
Read more