The continent of Norzelia is in trouble. While the three great kingdoms of Norzelia have finally signed a peace treaty after ending the long Saltiron War, there’s still a sense of unease that permeates through this period of calm. The political climate is uncertain, even if Triangle Strategy tries to open the story with an uplifting, celebratory event: a wedding that will bind the kingdom of Glenbrook and the Grand Duchy of Aesfrost.

Triangle Strategy puts us in the shoes of Serenoa of House Wolffort, a high house of Glenbrook. Serenoa himself is to be wed to Frederica Aesfrost, half-sister of the Archduke of Aesfrost. In an attempt to bring all three kingdoms together, it is the hope of Glenbrook that this wedding and a joint mining venture will help bring peace to the entire continent.

Right off the bat, it’s clear that Triangle Strategy wants its sprawling story of complex characters and political machinations to be front and center. Each chapter is heavy on the cutscenes and dialogue, often jumping from place to place to give players an idea of ​​what each kingdom is plotting, and how the citizens are reacting to the various developments. While the continent of Norzelia might seem awfully small at first — there are only three major kingdoms, after all — the more I played, the bigger the world started to feel.

Playing as Serenoa, you’d automatically assume that Glenbrook were the good guys while Aesfrost were the baddies and Hyzante was just full of onlookers. But within Glenbrook itself are several facts that don’t always see eye-to-eye with each other; you’d think that your fellow Glenbrook pals would be your first choice of allies whenever there’s trouble, but you’ll soon learn that every character is motivated by different things, making the story and world of Triangle Strategy feel a lot more nuanced and complex as you play on.

Tying all of these narrative threads together is the Scales of Conviction, the main mechanic that determines how the story will play out. At critical points in the story, Serenoa and his circle of trusted advisors will get together and discuss how they should proceed. Should you protect the last remaining member of the royal family by facing off against a terrifying army force, or turn him over to protect the citizens of your own demesne?

More often than not, your council will be split right down the middle, with one side firmly believing in one path, and the other strongly rooted in their beliefs in another. It’s your job as the new lord of House Wolffort to listen to what your advisors have to say, and to get a feel for the thoughts of your own people before coming to a decision. The catch is that Serenoa himself can’t actually vote on what his party does next; you’ll have to convince your advisors to see things your way, and use the information you’ve gathered to persuade them.

Tactical combat aside (more on that later, because it’s really good), I found myself completely absorbed in the story during these voting segments. Going in, my brain was trained to think that whatever new information I uncovered in that chapter would automatically come in handy when trying to persuade my advisors, but that wasn’t always the case.

When persuading a character, there are often three dialogue options to choose from, with some of them potentially getting unlocked if you managed to dig up new information during your investigation. The game tricks you into thinking that these are the options you need to choose because, hey, you did the legwork and this fancy new option has now become available to you, it must be the right choice! But that isn’t always true; Triangle Strategy forces you to consider the perspective of the character you’re talking to, and you’ll need to pick an argument that would best appeal to their sensibilities. 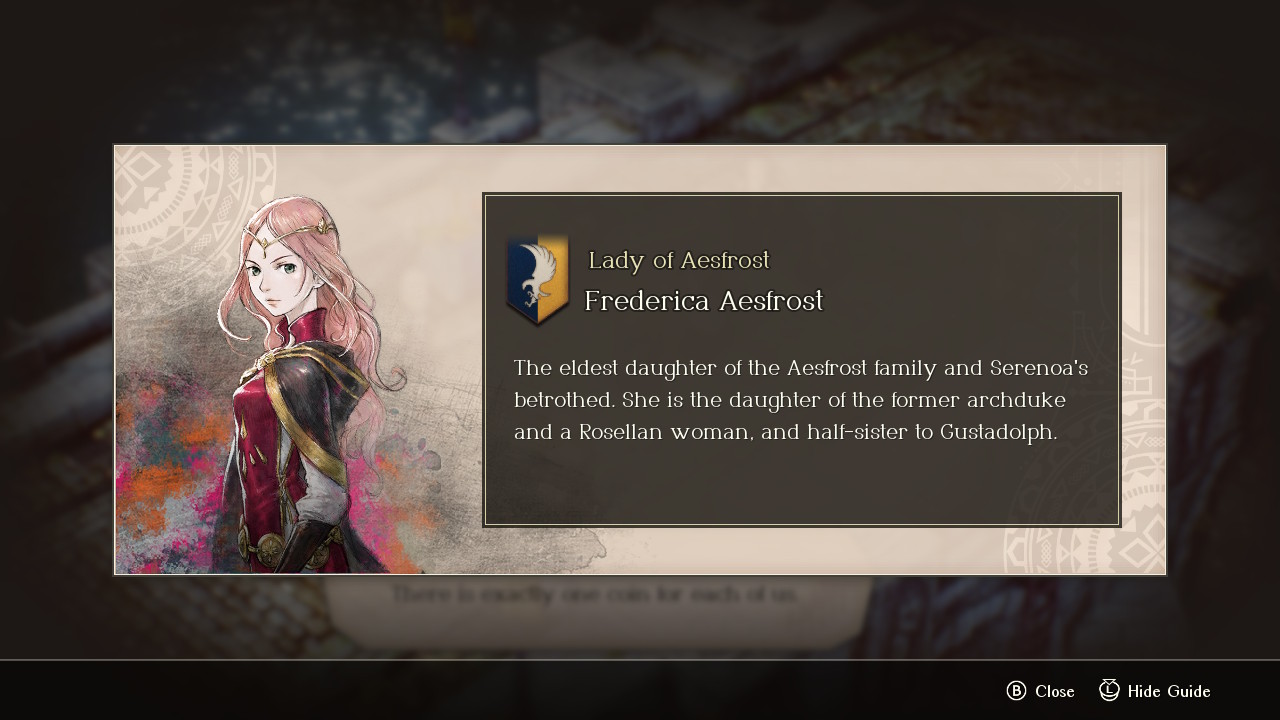 This is a game that lends itself very well to multiple playthroughs, and you’ll be pleased to know that Triangle Strategy does offer New Game Plus, allowing you to replay the story and make different decisions to see how events unfold if you picked another path The narrative paths do diverge considerably, and I often found myself reloading previous saves when I was unable to get my advisors to vote my way. In terms of story content alone, there’s a lot to see here, and I’m already pumped to get started on a second run to see just how badly things can go.

The developers were definitely keenly aware of how complex the story could get, especially as it throws so many new faces at you so frequently. With that in mind, Triangle Strategy also offers you the ability to bring up a character’s profile whenever they’re talking to give you a refresher. This came in extremely handy because, yeah, I have the memory of a goldfish and these constant reminders of who’s who ensured that I was still engaged in the story without fussing over trying to remember who that one bearded guy was again.

If there are any complaints to be had about the story and its characters, it would be that the English voice acting can veer towards the cheesy side at times. The voice work can get pretty hammy, even during the more serious scenes, which breaks the immersion from time to time. I was also initially a little put off by how one-note the characters were; Serenoa is very much a boring blank slate who feels really uninspired as a main character, and while his advisors have a bit more of a flair to them, it’s also rare to see any significant development from the cast.

Lackluster character development might sound like a death knell for such a story-heavy game like Triangle Strategy, but with how the story itself is structured, it actually works to some extent. Serenoa needs to be a blank slate because the player is the one who decides how he should persuade his advisors, and while the characters are mostly one-note, they work together beautifully to create a cast that almost feels like a family by the end of the games You could say that character development takes a bit of a hit in order to accommodate the Scales of Conviction, but considering how engaging it is to explore all these different story paths, that’s a compromise I’m willing to accept here.

Each chapter also comes with one or two major battles, and this is where the fun starts. Just as Octopath Traveler was to Final Fantasy VI, Triangle Strategy is an homage to old-school tactical RPGs like Final Fantasy Tactics and Tactics Ogre. I’ll be the first to admit that I’m not the biggest tactical RPG expert around; I abandoned FFT because I got into it too late and the UI was so outdated by then that I quit when I got to Dorset. All that said, however, Triangle Strategy feels exactly like the modern reinvention that Tactics needed in order to keep me hooked.

The nitty gritty elements like unit promotions and weapon upgrades are all presented in a clear manner — these can be accessed when you head to the encampment in between battles, and this is where you can purchase resources to strengthen your weapons, or speak to an NPC who can promote one of your units to a more advanced class once you have the necessary items. Every unit is tied to a specific class with its own promotions and that can’t be changed, but what really surprised me was the sheer size of the roster, and that completely made up for it.

There are so many characters you can recruit in Triangle Strategy, it’s honestly kinda staggering. There are characters that serve as clear callbacks to FF Tactics, such as the Apothecary who functions very similarly to the Chemist, and some interesting additions as well, like the Wordsmith, who literally smack talks your enemies to infuriate them. You have your more traditional classes as well, like your fire and ice mages, your swordfighters, archers, and shamans. The point is, there are tons of classes to mess around with, and building a team that suits your play style shouldn’t be an issue.

Combat in Triangle Strategy plays out like how you’d expect; taking place on a large grid map, you need to be aware of terrain and height advantages as you move forward. Attacking from a high point, or from a unit’s rear will allow you to deal critical damage, and your fire and ice spells can also significantly change up the terrain and create new effects that could hurt units that pass through it. 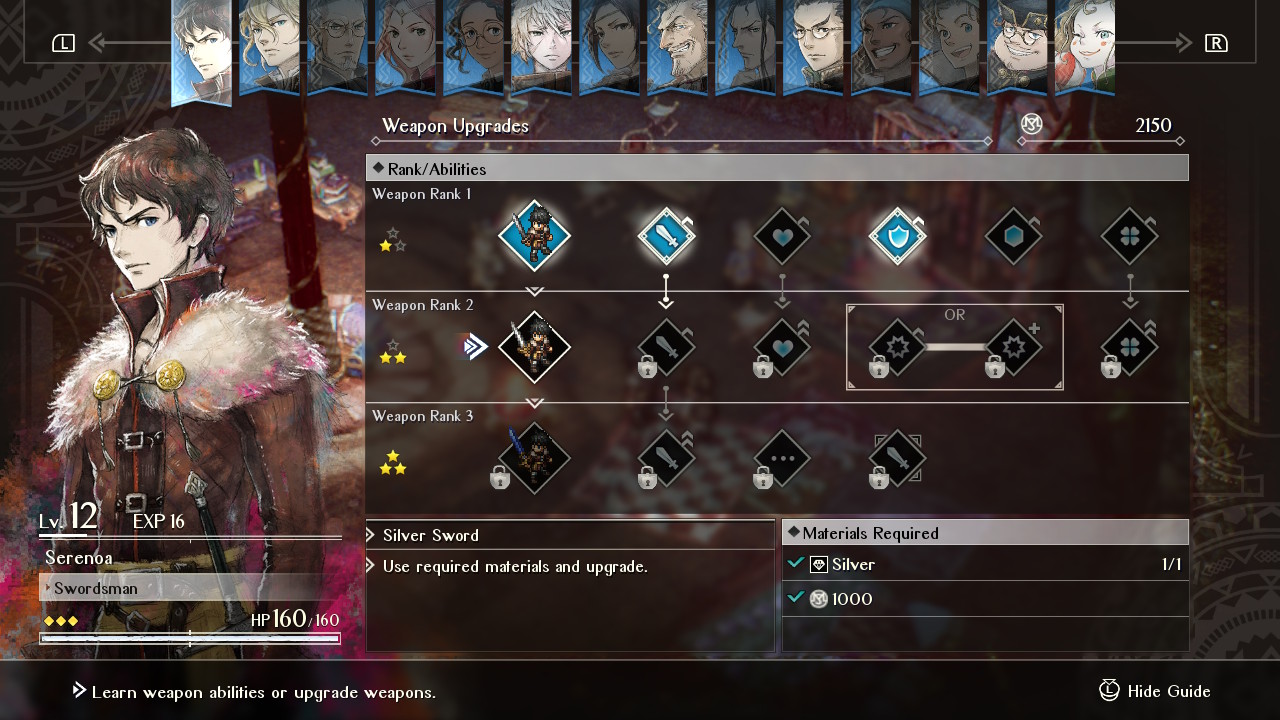 Your units are equipped with various different abilities, too, which can mess up your enemies’ positioning, potentially giving you the advantage in battle. All of this applies to your foes as well, of course, and careless positioning can really hinder your entire game plan.

While I’m not all that familiar with the Tactics-style combat, I am extremely familiar with the Fire Emblem series, another tactical RPG franchise with permadeath as a core mechanic. If, like me, you are also a huge Fire Emblem fan and you’re wondering if this would be in your wheelhouse, there’s one critical difference to be aware of: the Fire Emblem games were challenging in the sense that you had to clear your battles without losing a single unit. The individual enemies themselves are easy to kill, but making it out with everyone alive could be a real challenge.

In Triangle Strategy, there’s no permadeath, but your foes are a hell of a lot smarter and harder to kill. You need to be okay with sacrificing your units in order to win the battle, but be warned that sacrificing someone too early could put you in a very disadvantageous position after that. The battles in Triangle Strategy are seriously grueling especially as you get into the later chapters, and even some of the early ones had me on the edge of my seat as I genuinely wasn’t sure if I’d be able to scrape by.

Thankfully, the game is rather forgiving in that if you do lose a battle, you retain all experience and levels gained, and any items consumed are reverted back to their pre-battle state. This means that the game does inevitably get easier the more you get stuck on a single level, and if that sounds too casual for you, you could always bump the difficulty up to hard.

All in all, I’m a huge fan of this HD-2D style approach Square Enix is ​​taking with these games. Octopath Traveler looked like a souped-up Final Fantasy VI, and similarly, Triangle Strategy looks like a souped-up Final Fantasy Tactics with more modern mechanics and UI. I think fans of the genre are going to really appreciate what Triangle Strategy has going for it, even if the character development could use a bit more work. And for genre newcomers or those less familiar with it like myself, this is a fantastic entry point with an engaging story to keep you hooked. 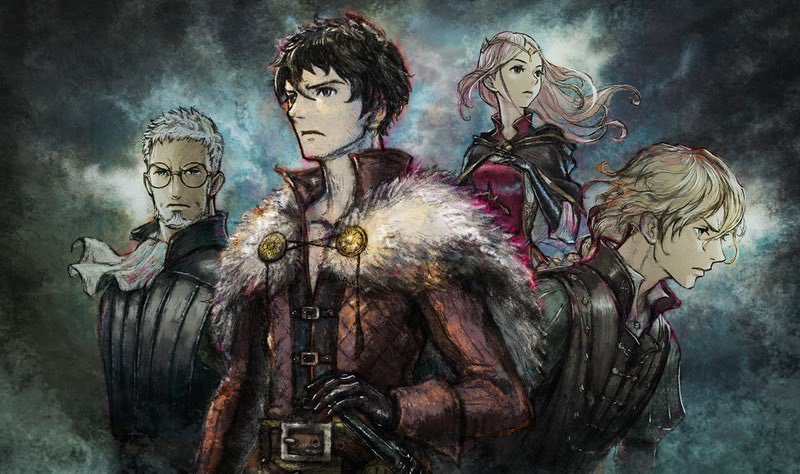 polygon's Patch Notes is a weekly newsletter that tells you about the best stuff to watch, play, and read. We wanted...
Read more
PC Gaming

Destiny 2: The Witch Queen: What time does it go live?

Destiny 2: The Witch Queen is nearly here, and it's bringing some major changes to Destiny 2, like a new weapon type,...
Read more
Games

Lollipop Chainsaw remake will be released in 2023

Lollipop Chainsaw, the cult 2012 game about a cheerleader battling zombies while her boyfriend's disembodied head dangles from her waist, is being...
Read more