What is it about match-3 games that really gets our gears going? Is it the splashy animation sequence that congratulates you on a successful match, or simply the satisfaction of linking colors together (much like the toddler toys of our youth)? There’s definitely an itch there that’s yearning to be scratched, and Infinity Plus Two with 505 Games found that secret sauce first with the Puzzle Quest franchise.

In Puzzle Quest 3, players can dive back into the trailblazing IP with a brand new quest to save the world, but is the third installment of the beloved franchise worth coming back to?

THE STORY OF PUZZLE QUEST 3

As expected of any old-school RPG, you start off as a regular character that’s thrust into a quest to save the world of Etheria. Of course, it wouldn’t be an RPG without those random encounters along the way, which range from pesky goblin nuisances to the occasional NPC that needs help with a few chores.

Characters you meet along the way may just join your cause as Followers, who can grant you special boons in and out of combat. The very first one you’ll meet, Eveline, can create and exchange Relics for you, which are useful upgrade materials you’ll need to buff your gear. You’ll also get to recruit Minions that can help you unlock special chests or provide support during PVP combat. 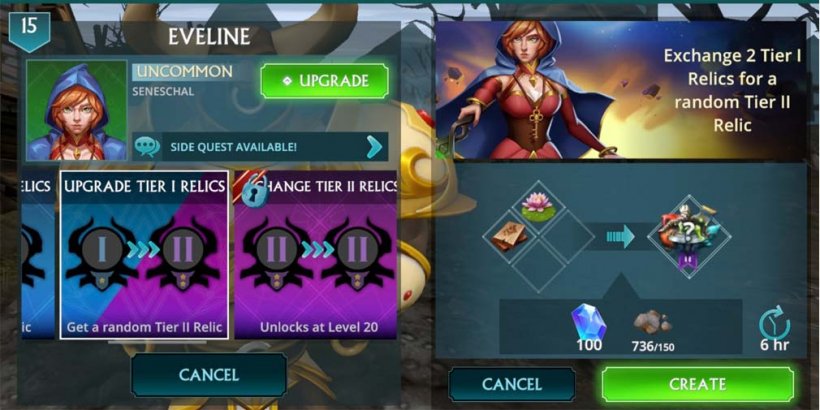 This lovely combination of match-3 and RPG gameplay elements is what made the Puzzle Quest franchise popular, and this time, visuals are in full 3D. You’ll pick your class (Paladin, Berserker, Shaman, Assassin, or Necromancer) and engage in match-3 puzzle battles with monsters in the field, where you can not only match colours, skulls and gems vertically and horizontally but also diagonally.

What makes this new installation even more unique is the fact that there’s a timer that starts once you start matching your first gem, and you can match as many tiles as you want to until the timer runs out. It’s best, then, to calculate your plan of attack beforehand to execute it in one blow once the timer starts, adding a new layer of strategy to the gameplay.

You are, however, manipulating your board all by your lonesome – your enemy doesn’t have the same luxury. This means that a tile you may have overlooked will still be there during your next turn. Each character class also has unique spells that correspond to colors on the board, so you can pick the one which suits your playstyle best (you can still create new characters in limited slots, so don’t worry if you can’t make up your mind right away).

While the match-3 elements may seem straightforward, the RPG elements are anything but. Outside of combat, you’ll pick up gear from loot, upgrade them, salvage the ones you don’t need and evolve your weapons and equipment to the highest rarity for more devastating damage. You can do the same for your Spells, as you can switch up your loadouts to equip the abilities you think will save you in a pinch. In the World tab, you can also take part in limited-time boss battles, participate in raid dungeons for materials, and take on daily challenges for more valuable loot. 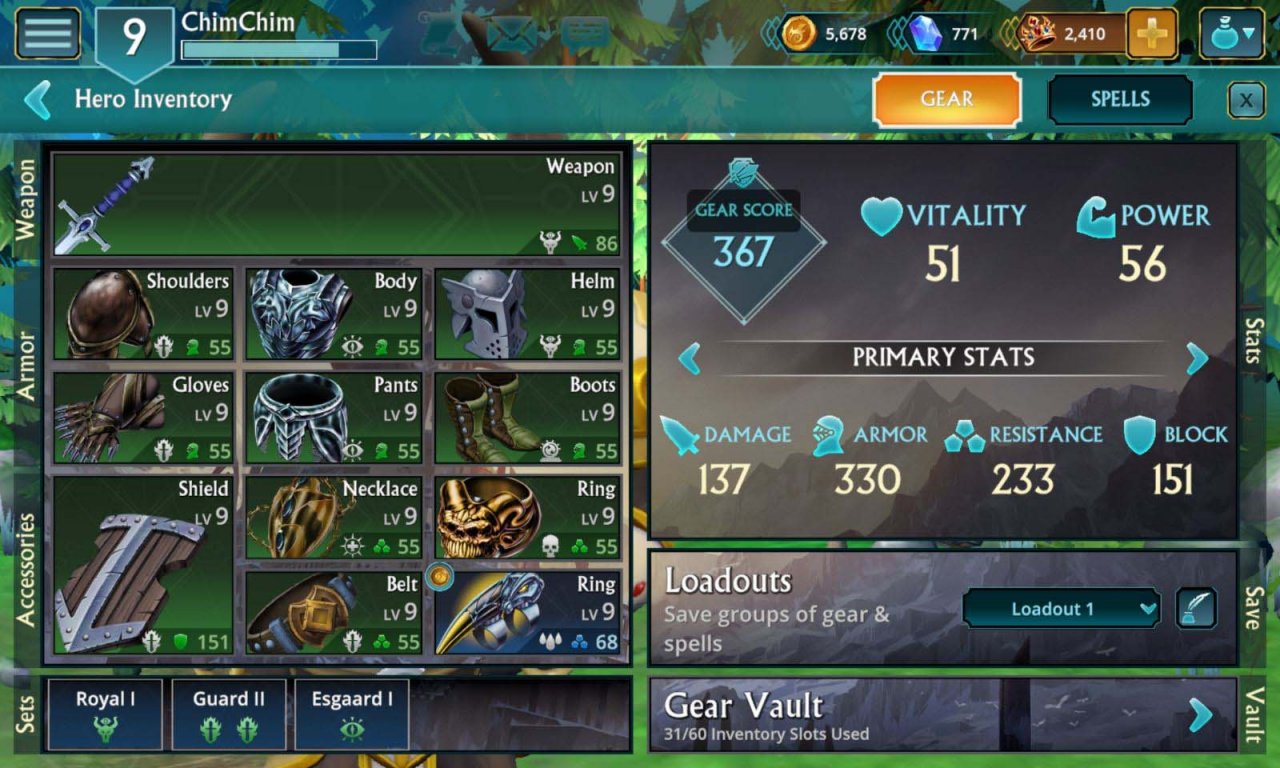 While all of these are typical elements of mobile RPGs nowadays, the content feels a little too restrictive due to the timers on practically everything. For instance, opening chests require specific keys, and if you don’t have them, you can send your Minions to do the work for you (which will take hours before the chest can be opened). You can also pay your way through gems to speed things up – this instant-pay feature is also present in Followers’ tasks, plus in unlocking slots.

In particular, you only have limited slots for storing chests and whatnot, so if you want more, you’ll have to pay up. Upgrade materials are also a little difficult to come by if you don’t grind in the dungeons enough. Plus, there’s a difference between paid currencies and being an actual VIP – there are just some things your paid currencies can’t buy if you’re not in the VIP club. 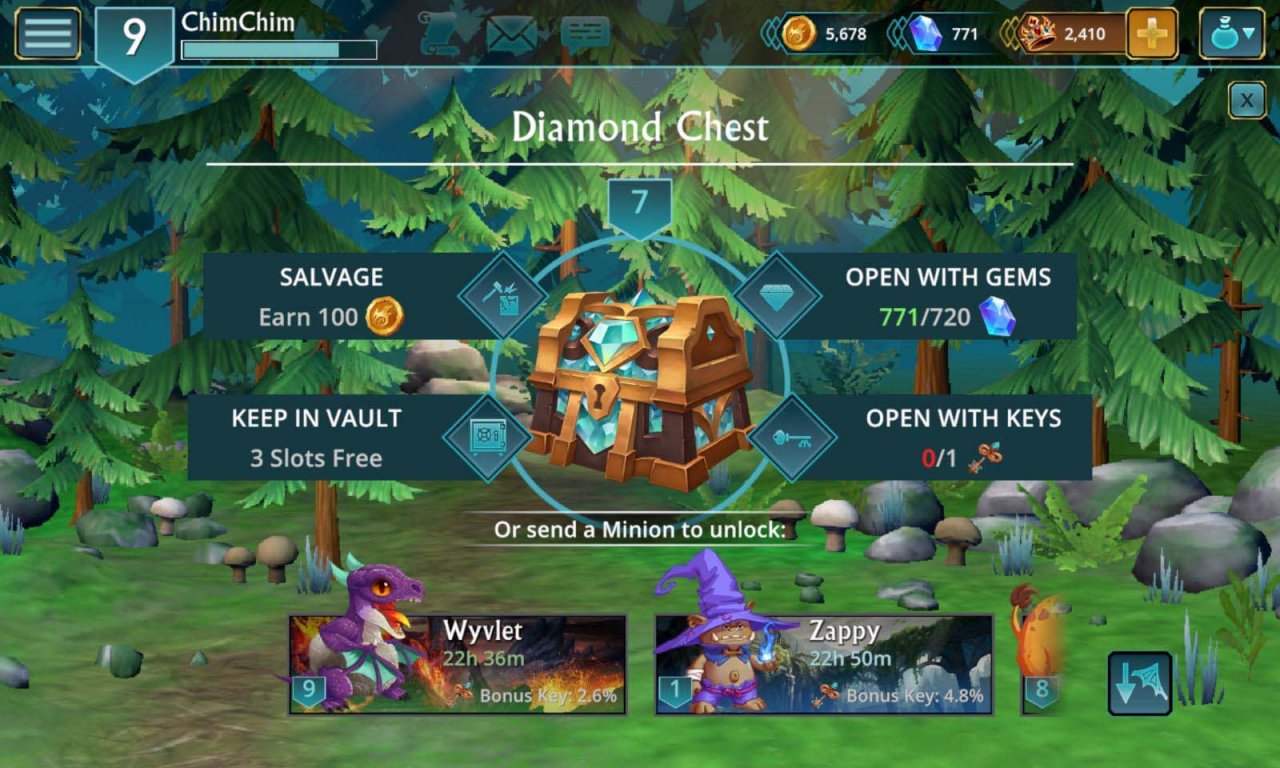 With the many, many, many materials you need to upgrade gear, it can be a challenge to progress if you’re looking for a more casual experience. It’s not all about your match-3 prowess here – winning matches means being able to maximize all the gear you’ve got, and you can’t do that if you don’t pay attention to each detail of each game content. It can be pretty overwhelming at times – the game definitely isn’t made to simply feed your match-3 hunger as a pick-up-and-go title.

The PVP element is also a little underwhelming at the moment, as you’re matched with a random player that you can’t switch out. It’s simply a matter of which player has the higher combat power most of the time, which doesn’t really leave too much room for strategic thinking.

Still, Puzzle Quest 3 is an enjoyable experience, and it’s not something you can simply breeze through. I myself have been playing the game for a little under two weeks now, and I still feel like I’ve barely scratched the surface. It’s meant to be a live game, after all, with plenty of other robust updates to come as the developers finetune the title in the future.

Sometimes, it's the smallest touches that leave the biggest impact. Street Fighter 6 has embraced this with a new feature called...
Read more
Nintendo

To say that Splatoon 3 is getting post-launch support from Nintendo would be an understatement. Not only does the game get Splatfest events every...
Read more
Guide & Tips

How to Get QP, Use Quietus Skills & More

News Sea of ​​Stars developer Sabotage Studio released another of its weekly clips of its upcoming and charming pixel art RPG. Published on August 14, 2022...
Read more