In an open-world game, freedom is everything. But, many open-world games interpret player freedom differently. Usually you are given one area at a time to explore and the explorable territory increases parallel with the story. ELEX II handles it more as an Elder Scrolls or Fallout game which give the player as much freedom as they could possibly want. However, just like those two examples, it’s a double edged sword, as you could just as easily wander into the wrong area and get completely demolished by a monster out of your league. At the same time, that system makes it fully dependent on the player which it will be, sink or swim.

ELEX II opens on a short recap of the first game, but doesn’t really help much if you never played the first game. You are told of the biggest events, but they lack any sort of real context so it doesn’t quite prepare the play as it should. Understanding the story of ELEX II certainly doesn’t hinge on knowing past events, but the lack of solid background undercuts some of the tension that exists.

The main takeaway is that you play as Jax, the protagonist of the first game, who has been living in isolation for the last several years. After the previous game’s big bad was defeated, none of Jax’s allies would listen to his alarmist warnings of a further threat coming in the near future. So with that, he retreated into his self-imposed exile to prepare.

ELEX II’s story starts just as Jax’s worst fears come true, and an invasion begins. It even starts right on his doorstep, with the aliens destroying his house with their first real incursion. After an ensuing battle with a couple of altered dog-like creatures, Jax is begging and collapses. He awakens two days later having been under the care of a doctor, Adam. Jax is informed that from the bite he is now infected. The infection will no doubt turn him into a monster, as it is currently doing to all sorts of life forms across the planet of Magalan. Adam promises he is working on a solution and gives Jax a jetpack, sending him out a plan to meet up together later to discuss the next steps regarding the invasion.

Jax now has to deal with his past regarding the many factions of the world. The resistance against the Skyands requires a powerful army, so it is up to the player as to how they want to proceed. Your choices of allies are mainly split between the war-mage Berserkers, or the ice cold emotionless Albs, but there are a few others. Ultimately it comes down to whoever you think as a player might have the best chance at helping your side succeed. In a game big on choice, there is a lot riding on how you handle the various groups and who you ultimately choose to join.

From here, the map is entirely available to you. The jetpack is an incredible tool for a game like this and It almost feels unfair that it is just handed to you at the very start of the game with zero fanfare considering the massive impact on gameplay. You want to get up over that cliff? done Time to escape this fight? Let’s go.

The jetpack is pretty much infinite, in that fuel immediately starts regenerating once you are on solid ground, and the fuel amount is possible to upgrade for 50 whole levels. The jetpack is also super deadly, as now you can get to places that normally you wouldn’t be willing to make the trip to reach to find enemies that probably will outclass you.

Enemies in ELEX II don’t have levels; there is no scaling. Every monster type is precisely as difficult when first encountered as it is the whole game. This also provides an almost drunken confidence as you never know exactly how hard something is going to be. It makes you ask, “is a forest troll something I think I can take down?” and the answer is usually no. A tough enemy might have a skull to the side of their health bar, but why would you listen to that instead of trying it? I wandered into a mysterious alien cave not that long after being sent out into the world and found myself very quickly chased out of said cave by something I could barely even dent. It’s moments like this where ELEX II shines. 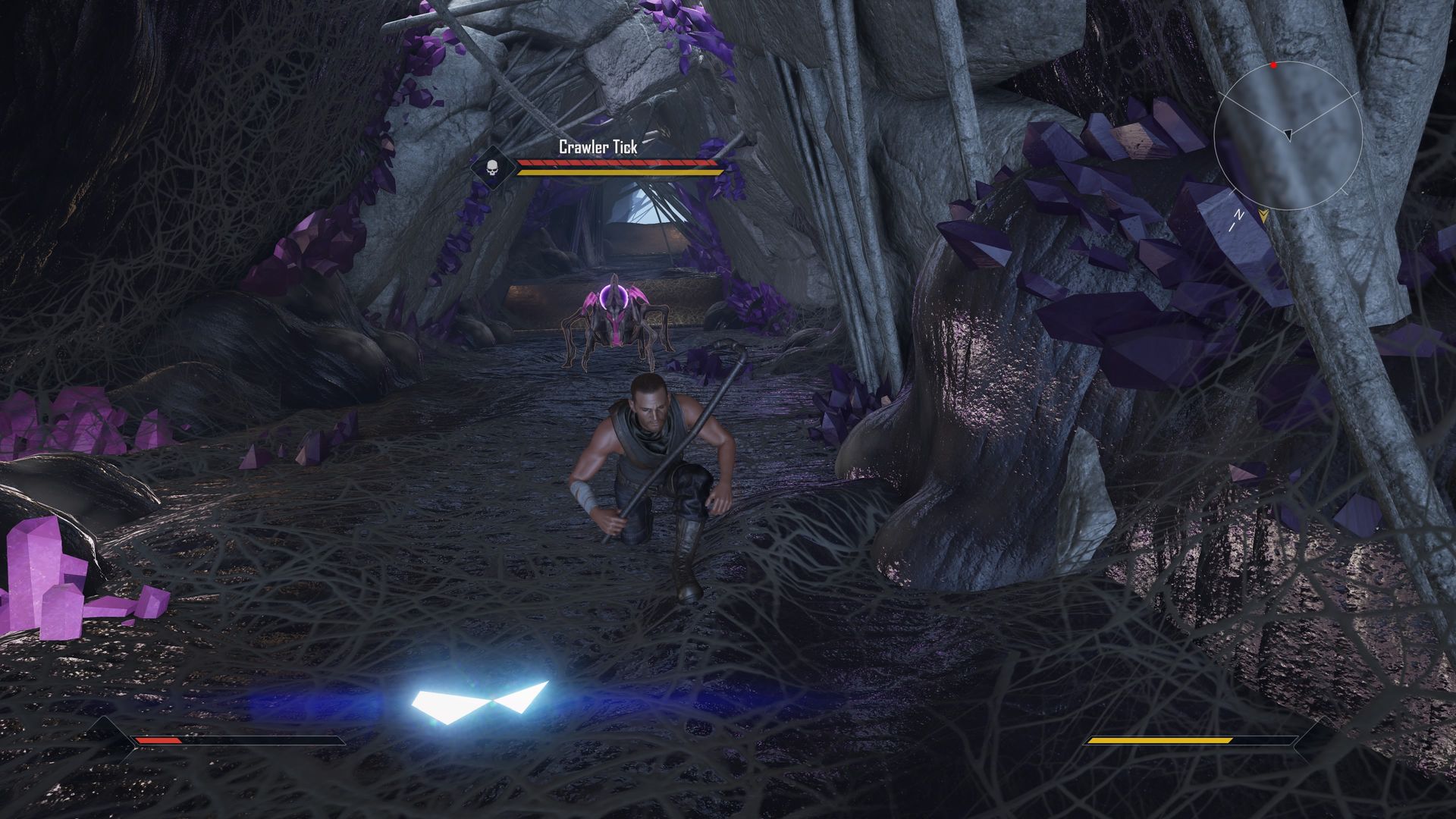 While I am very quick to compare this to Elder Scrolls games, it lacks some of the most associated features, but in a positive way. In ELEX II, you don’t have a carry weight or inventory limit. Jax is some sort of bottomless bag and nothing can every stop you from shoveling whatever you want into your pockets. Stealing is an option, but it can bring unwanted attention unless you do in stealth away from watchful eyes. Item’s don’t even get marked as stolen, once it is in your pockets, that item belonged to Jax the whole time.

Combat in ELEX II comes in many different flavors. You have one-handed, two-handed, bows, crossbows, shotguns, blasters, grenade launchers, rocket launchers, slugthrowers, spear launchers, and cannons. As far as what enemies wield, a vast majority stick to melee with some pulling out a ranged weapon once they gain a little distance back from you, but it is rarely ever more than a shotgun or a blaster as far as ranged weaponry goes. 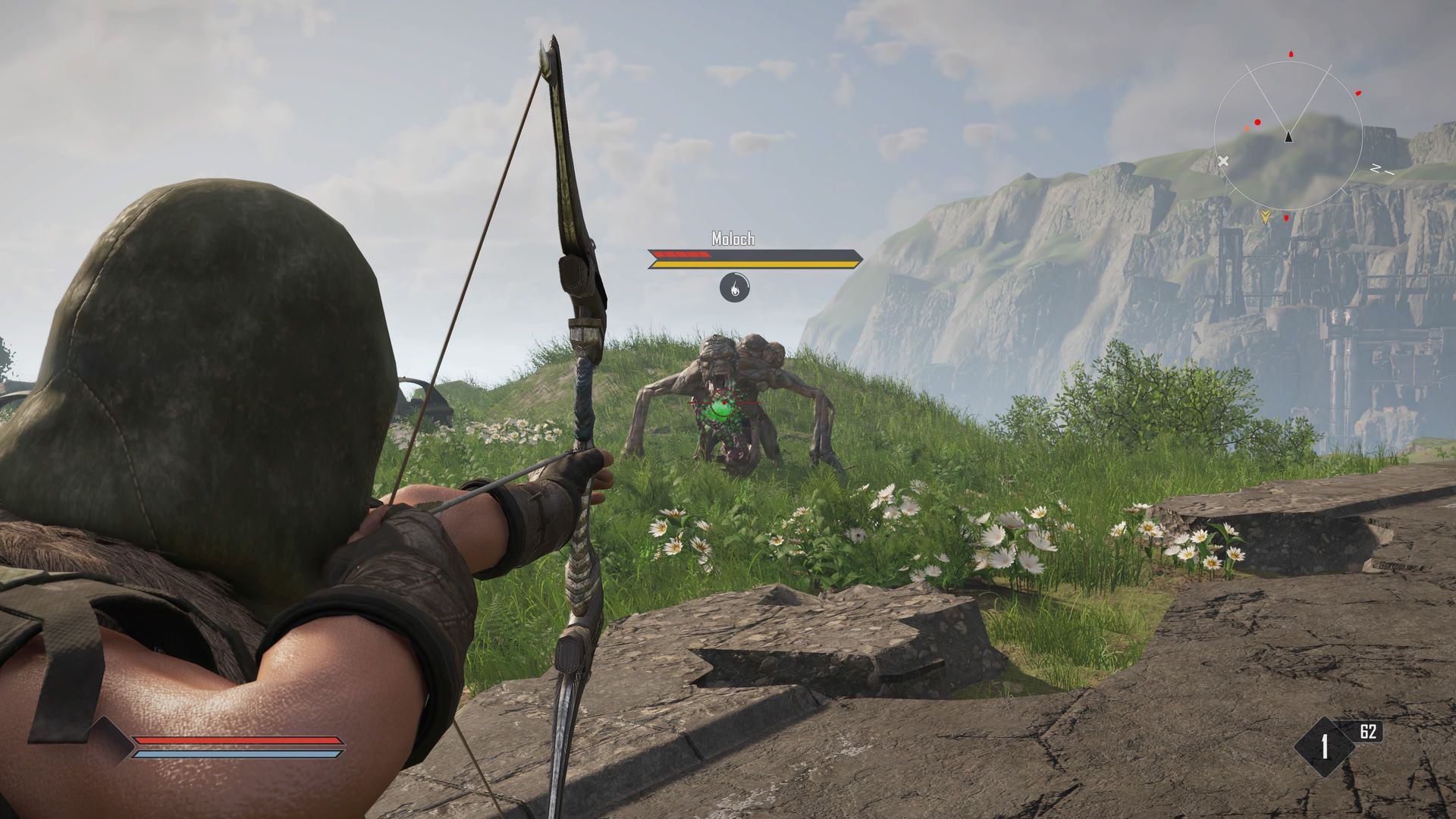 On the subject of weapons, one of my biggest gripes with the first ELEX was the fact that when you killed an enemy attacking you with any sort of weapon, once they died, said weapon simply vanished. This made weapons carry more weight but it also led to using inferior gear for much longer. This time around, while enemies drop their weapons, it drops as a “damaged” version and you then must gather several other versions of it to craft into the standard iteration and beyond. This makes weapons looted from enemies mean more as even outdated gear can potentially craft up into better gear.

Combat isn’t necessarily something of Dark Souls quality; most of the time you are just hacking and slashing through enemies as you would be when playing Skyrim in third-person. Combat is the only place I ever encountered the game’s honestly lone problem wherein the framerate would dip on the more populated fights. I never had this issue during any other part of the game, just the occasional fight would cause the game to chug a little bit – nothing major or game breaking.

All enemies do have a yellow stamina bar that your hits gradually empty until they are knocked down though, similar to a poise mechanic. This opportunity gives you time to run over and do some damage while they are stunned. Of course, this isn’t just an enemy thing. You also have your own stamina bar to watch as you fight as swinging your weapons does drain it. Though your stamina comes back quickly and later in the game you hit hard enough that fights can be over before it matters. Stamina amount and recharge can also be upgraded.

With said upgrades, it deals with what you earn on level up. Without certain skills, every level gives 10 attribute points and 1 skill point. The attribute points are put into your usual Strength, Constitution, Dexterity, Intelligence, and Cunning. After an attribute hits a certain level, it begins costing two points to upgrade, which then raises to five points per level up. While this does add up, the game renders this process entirely redundant as soon as you can somewhat reliably craft potions with recipes that will can raise any attribute by one point on the spot or grant more attribute points. 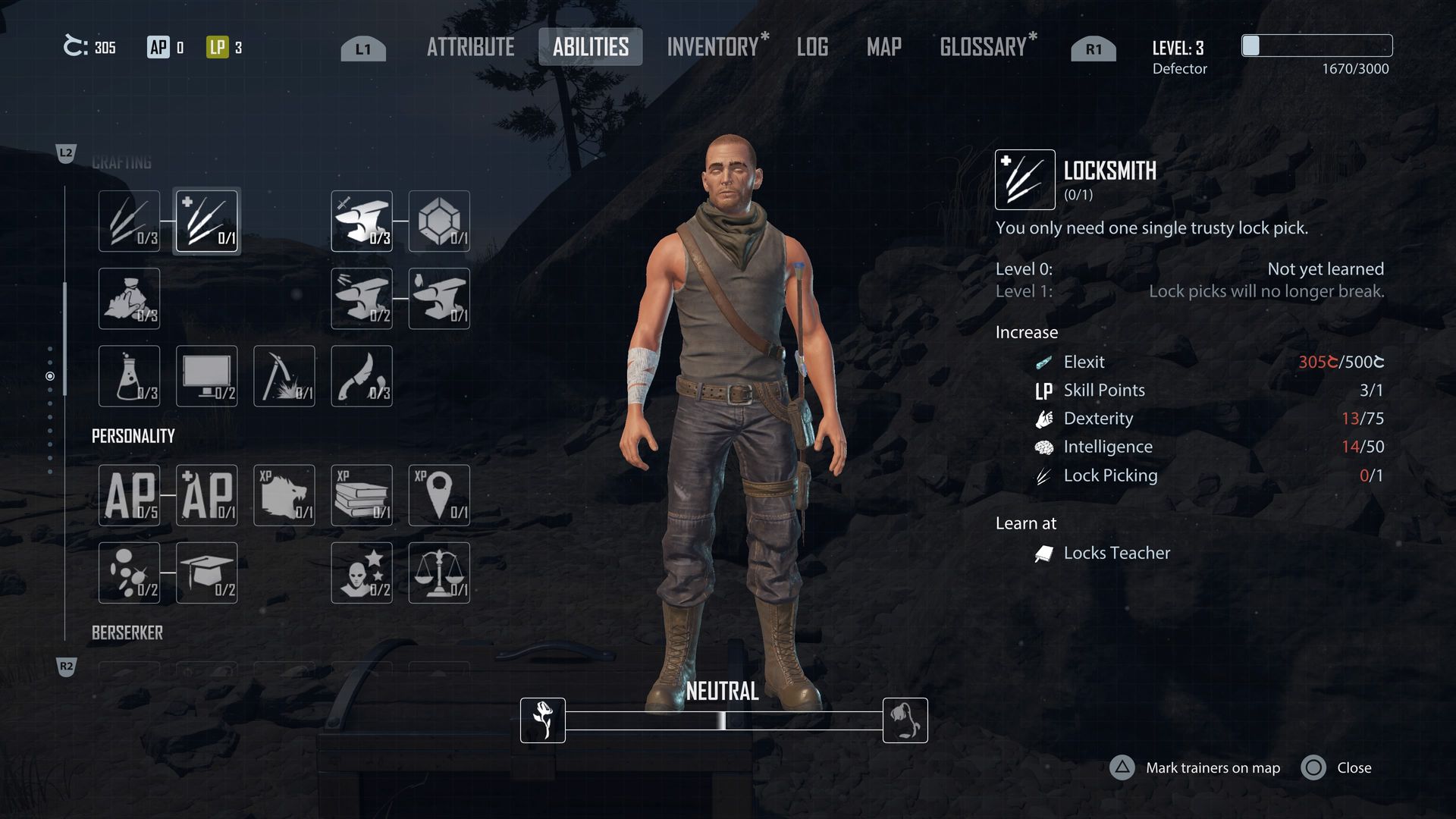 The skill points pertain to a tree of things covering aspects of character building like combat and survival. These skills can be increasing melee weapon damage, lock picking, or weapon crafting. You can’t just learn these skills, however, you have to find someone to teach them to you and have corresponding attributes at an acceptable level. Every single skill costs a single point, so between the potion you can craft to gain one skill point and the one point you get a level, you can easily end up learning every skill. Due to this, character builds aren’t really a thing in ELEX II. You can kind of just max Jax out to obscene levels.

There is certainly no shortage of XP to be found. The game has hundreds of quests to be found. While some of that number are quests that chain off of each other, there is a trophy I got before even finishing the game for completing 300 of them. The quest menu has a very nice layout with the sub-categories like companion quests and locations very clearly designated. 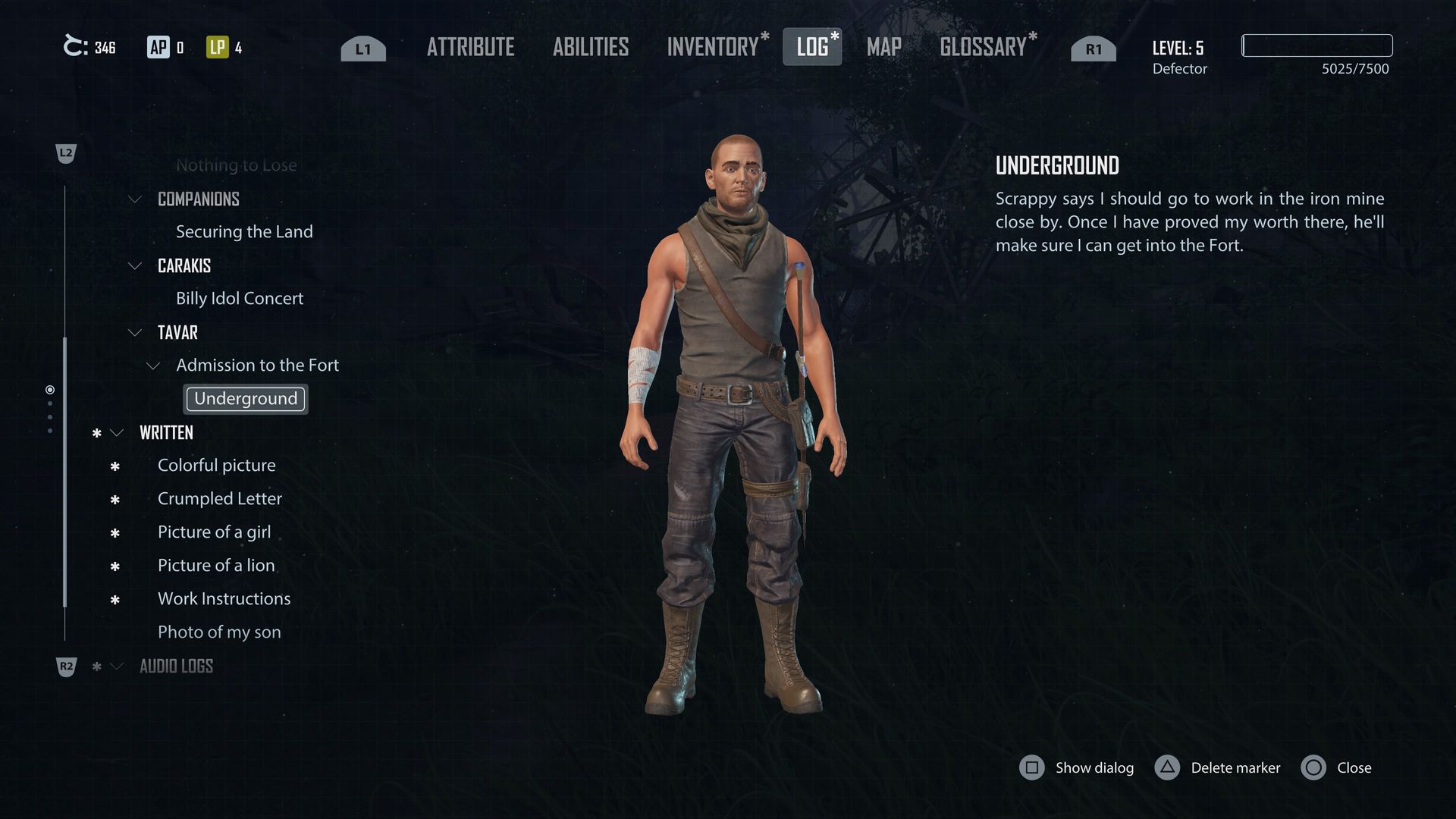 I played the first ELEX and despite enjoying the usual Piranha Bytes style, it didn’t grab me. At this point I couldn’t necessarily tell you what it was that didn’t do it for me, I had enjoyed the Risen series since the first one on the Xbox 360, but ELEX just felt too open without a real reason to explore into it. The game felt empty.

I mean it when I say that the jetpack solves all the previous game’s problems. While there is a damn near instant fast travel feature, it doesn’t match up to the feeling of getting to just fly around the map like Superman. It provides everything you could possibly need like travel, or an easy combat escape. In the first game if you aggro’d the wrong enemy you were toast if it caught up to you. Too much of the game made exploration feel like a chore if you turned the wrong corner. In ELEX II, you can reliably escape.

The use of the jetpack meant that the map had to have more to it. There could no longer be somewhere players couldn’t/wouldn’t go. This is probably the first game of its kind where I honestly believe I saw at least 90% of the map. ELEX II is one hell of an experience and made swooping around the map to unlock fast travel points and complete the main story feel like an adventure rather than just ticking off boxes. The freedom ELEX II allows through the traversal mechanics is something that I have never encountered before in a game like this but will now always think about going forward. 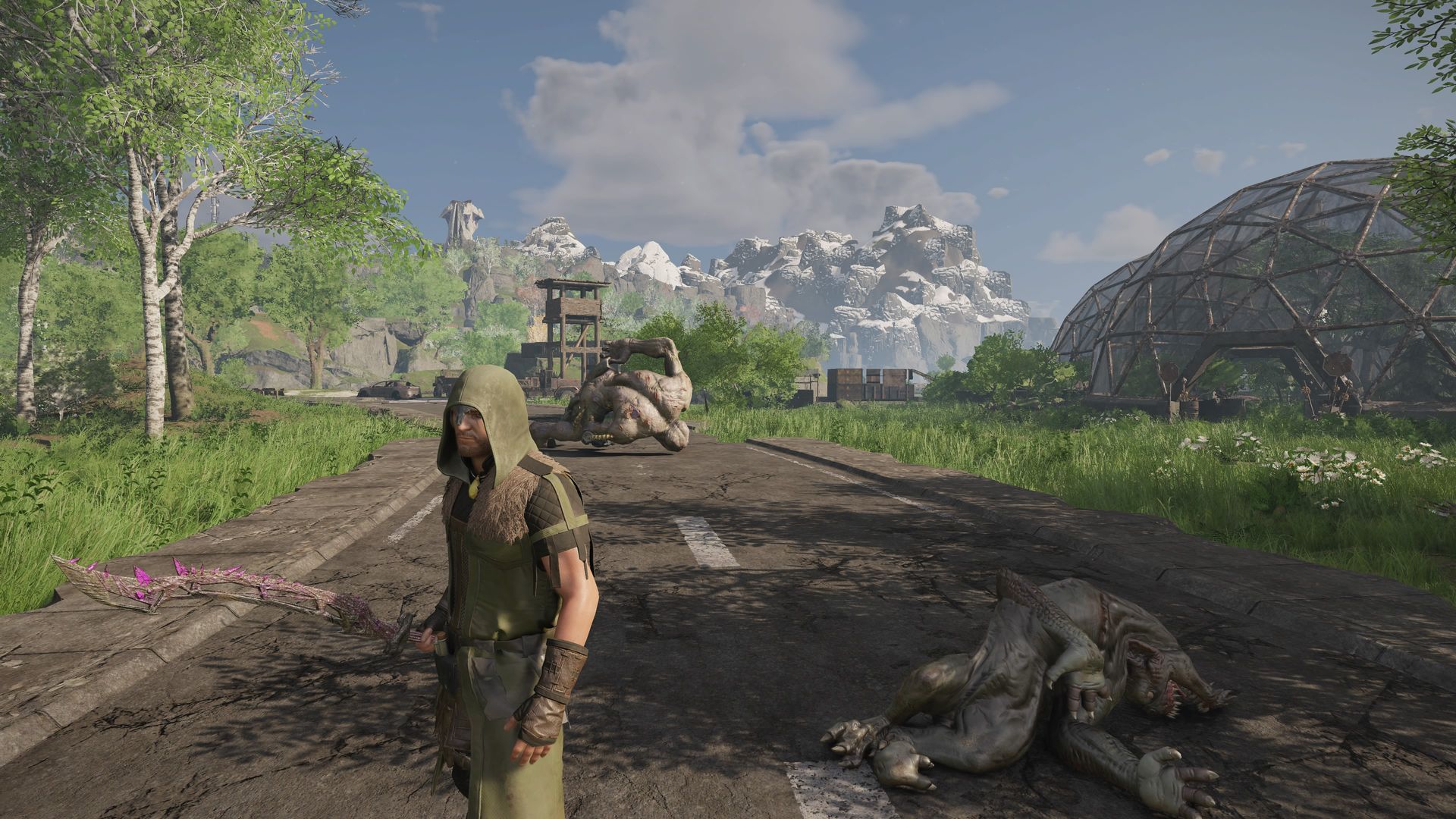 Image: UbisoftPrivate equity firms could be beginning to circle over Ubisoft, Bloomberg reports friday Talks are early, but include interest from firms like...
Read more
PC Gaming