We’ve reviewed a lot of different mobile controllers over the years, and if you looked at the selection that we’ve featured, then you’d definitely notice a pattern or two. Most of them are in sleek black and most of them are horizontally stretch-to-fit. The Riot PWL ESL mobile controller isn’t either of these. It’s a white, yellow and green controller with an attachable, central holder that extends vertically, to snap around a phone or tablet in landscape view.

There was a point where this design was in fashion, and, at that point, the Riot PWL ESL probably wouldn’t have stood out alongside the headlining competitors beyond its bold color scheme. However, there are a few extra features on the controller which, complete with the (now) less commonplace design, really make it into an interesting package.

The mount, for a start, is a sleek little cushioned thing. It’s also detachable, which is both one of the controller’s biggest strengths and weaknesses. It’s a small mount, no longer than a thumb once folded up, and the folding mechanism means that you can tilt and pivot it so that you have the best view of the screen. The screen (your phone) is, of course, in front of many of the buttons on the controller, but most people already understand the Xbox-style layout for this to not be a problem. The problem is, what DO you do with the mount when you’re not using it?

If you’re not using the controller then it’s totally fine to leave the mount in – although it’s certainly not as compact an offering when left like that. And when you travel you can leave it in a bag or pocket. But, it just seems like a bit of an unnecessary faff. The strange thing is that the mount actually extends long enough to clip over the back of the controller, but due to the always-connected cable it can’t sit steady. The cable is, of course, integral to the design, and so can’t be changed, but maybe future revisions will have slight changes to the mount shape so that it can clip on the back; that would be a welcome improvement.

The mount is very smart though. I like the clean branding, and the small plastic cover on the controller (which makes a yellow bar when pushed in, and is easy to remove) looks sleek. It, alongside the yellow analogue bases, d-pad, triggers and bumpers, serve as a really sharp accent on the otherwise white-front, green-back controller. It’s also got a ridge along the top of it where you can rest the cable, shorten it and keep it in place when using the controller with a phone, it’s still a bit lumpy, but better than it could have been. 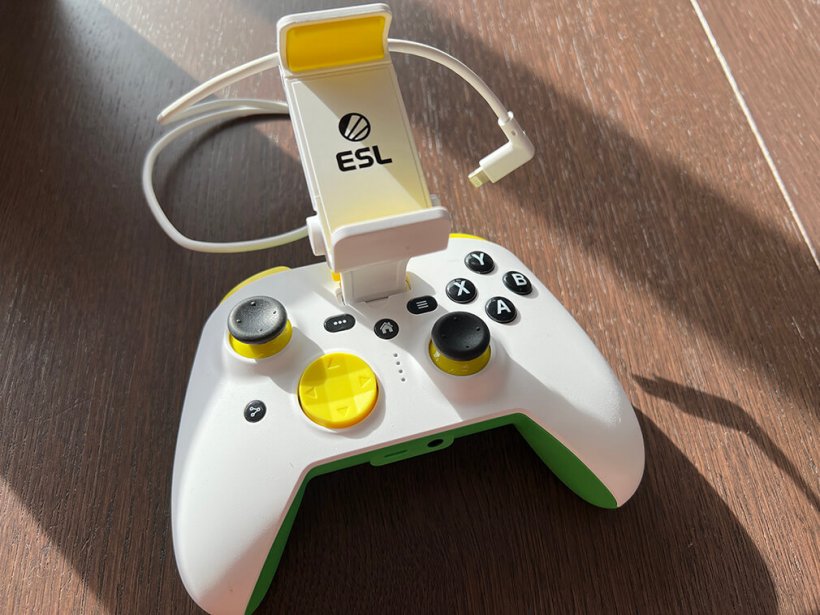 It is targeting the competitive market

The Riot PWL ESL mobile controller is, as you can probably guess from the ESL branding, one of those devices which are specifically designed for a competitive market. Most of the design choices have already been handled by Microsoft, or are things that we’ve seen become quite common place over the years, notably a shallow, one-piece D-Pad, wired-first design and the general Xbox controller layout.

Obviously, the controller layout is great. But, notably, there’s a headphone and passthrough lighting port on it, meaning you can charge and listen to audio at the same time. The lighting port (to phone-tablet) is hard-fitted onto the controller, which does mean that you’ll often find that it’s a bit too long or short at times, depending on whether you’re sitting back from a tablet or using the mount.

I do like the idea of ​​the fitted lightning cable, but it does restrict the phone to modern iOS devices. This is an effect of the ‘Wired Connection is faster’ mentality that dominated eSports a while back, and if that tiny fraction of a second is important to you then this is a great controller optimized exactly for you. 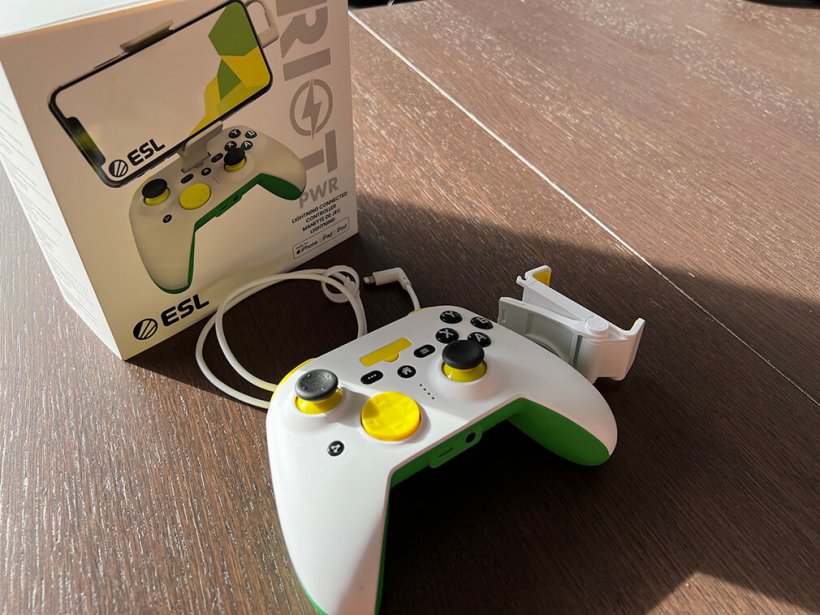 Because that’s the thing, you can buy a mount for about £10, and you can mount that onto an Xbox or Playstation controller. You’ll get the same great shoulder buttons and triggers (and they really are great on the Riot PWL ESL), but miss out on the Share button feature, pass-through charging and that millisecond latency fix.

One thing that’s worth stressing though, that I’ve not mentioned yet, is that RiotPWR controllers are apparently the only Apple MFi certified controllers that have clickable thumbsticks (L3/R3). I’ve not tinkered with many other controllers in the classic, console form and so certainly can’t verify that; however, the clicking of the sticks and the feel of the triggers feel great.

The Riot PWL ESL mobile controller is a premium controller with a well-designed mount; it occupies exactly the same price range as its main competitor, but if ESL branding or fractionally-faster inputs are important to you then this is the one for you and an easy choice at that.

Updated on November 21, 2022 - checked for new codes Chimeraland is a brand new open-world survival MMORPG that has just landed on Android and...
Read more
Reviews

Despite having heavy subject matter such as generational trauma and biases, You people pleasantly paints itself with a comedy lens, making for a witty...
Read more
Playstation

Bloodborne paved the way for Tunic, one of 2022’s breakout indie hits

2022 was a strange time for video games. I've already taken to calling it "the chaotic-good year" of releases. (It...
Read more
Guide & Tips

Updated on: August 17th, 2022 - added Twice If you're looking for a complete My Hero Ultra Impact tier list, then you're in the...
Read more