It has been less than four months since we reviewed Nacon’s MG-X, so it’s incredibly tempting to make this article about how the MG-X Pro compares to it. However, I actually spent a lot of time comparing the MG-X to the Xbox Controller (and for good reason), so this is going to be a split comparison between the exceptional predecessor and its mainstream, console contemporary.

For a start, the biggest change is the actual appearance of the device on the whole. Gone are the rounded, switch-reminiscent edges of the non-pro version and they’ve been replaced with full, console-controller style grips for your hands. It’s taken a device that looks like it has the Xbox license to a device that looks like somebody has stretched out an Xbox controller to accommodate a phone screen in the middle of it. In fact, in person, it looks even more like that than on the developer’s website, where the images of it lack the menu button designs, and the color is a paler gray rather than the classic, stark, Xbox black.

In fact, I can’t help but wonder if the only reason that Nacon has not taken their already next-perfect controller design and brought it even closer to the Xbox’s controller design is actually licensing related. A major indicator of this comes from the changes to the face buttons. The face buttons on the last iteration were smaller and much closer to the current Xbox design, but in moving to an Xbox Shape, and – indeed – Xbox-style, concave analogue-stick heads, they’ve actually made wider, more-shallow face buttons. This is a bit of a shame as the buttons on the previous version were great, although I do have to say that these current ones still have that great feedback click to them.

But that’s a tiny complaint. The improved grips are a great addition to an already incredibly strong feature list for Nacon’s premium offering, and it makes the whole thing feel a lot more robust. All of the perks from the previous device – fast Bluetooth pairing, great trigger feedback, clear Xbox branding and suitability for large phones – are all still there, and it feels great to play games on it. 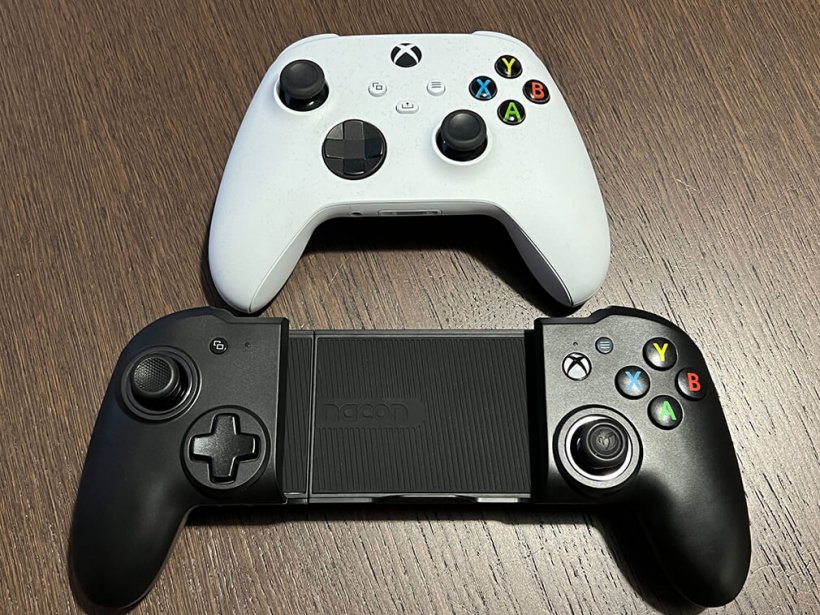 No companion app, but it’s not a big deal

For better, or for worse, there’s no companion app for the MG-X Pro. Some would say that’s an advantage, as other controllers sometimes make it practically mandatory to download the app, but with an app comes additional configuration options. In 2022, configuration options aren’t required for things like Stadia and Xbox Live, but for some that might be a deciding factor. One thing that does seem to be taken as better everywhere that I’ve seen it mentioned, however, is that, unlike some other mobile controllers, the extending grip doesn’t have rounded frames on either side, allowing for folding phones, or phones in cases, to be mounted to the device.

I said before that I was surprised that the MG-X wasn’t being bundled with phones and Xbox Game Pass, I now know why, it’s because that’s something that should be done with the MG-X Pro instead, it’s almost certainly the best controller for playing games on your mobile phone.

Soul Tide tier list of all characters sorted by their class

Updated on January 3, 2023 - checked for new characters If you're interested in a comprehensive Soul Tide tier list of all the best characters...
Read more
PC Gaming

Elden Ring is harder with a modded Fisher-Price toy controller

Elden Ring is hard enough as is. But it's even more difficult when you play through with a toy controller meant...
Read more
Nintendo

The team at Devolver Digital have announced that the super-stylish samurai adventure Trek to Yomi is bound for Nintendo Switch. The blood soaked...
Read more
Guide & Tips

Are you eager to learn what the latest Hero Wars daily links are? Then keep on reading, because that's exactly what we are...
Read more