It’s been almost a good few days since I rolled credits on Martha Is Dead, and I’m still not entirely sure how I feel about it. Given the backdrop of controversy surrounding its disturbing content, I had gone in expecting some overly-gratuitous gore-fest that pushed the boundaries of what’s deemed acceptable in the medium for the sake of it.

The good news is, it doesn’t shove this in your face, nor does it force you to sit through some of its more uncomfortable scenes without offering a warning and a censored alternative. In fact, the narrative of Martha Is Dead is easily its strongest point, but the core gameplay loop starts to wear thin very quickly, resulting in a monotonous and sometimes frustrating slog to see how Giulia and her family’s story comes to a close.

The first-person psychological thriller is centered around two twins living with their parents in Italy in 1944, right towards the end of WWII. You play Giulia, a teenage girl that seems innocent enough to begin with. She loves cameras, capturing shots of the wildlife and whatever else her motion-sensitive traps happen to spot in the woods near her home.

One day, when setting up her camera, she notices someone floating in the lake. Yes, you guessed it, it’s her twin sister Martha, only she’s wearing one of Giulia’s dresses. And surprise, surprise, Martha is dead.

Stunned by the traumatic discovery, for reasons unknown at the time, Giulia takes the necklace of her deceased sister and wears it, only for her parents to come along and mistake the two twins for one another. For all intents and purposes, Giulia is now Martha, and that means pretending to be deaf — as Martha was — and essentially inheriting the life of her twin for the rest of her living days.

This sets up the rest of the game, as players explore the woods and the stunning surroundings of the family’s countryside home, learn more about the mysterious circumstances surrounding Martha’s death, the supernatural legend of the White Lady, and the setting of war-torn Italy .

It’s a fascinating premise for a narrative, one that delves into the fragility of the human psyche, the lasting damage of traumatic events, and human nature’s desperation to belong and feel loved. That oh so familiar burning desire to be right and the inner turmoil we endure when everything else tells us we’re wrong.

It’s unsettling but not in the way that Outlast or Resident Evil’s jump scares or the enemies that chase you are. It strikes closer to home, highlighting how quickly the human psyche can unravel when faced with emotional trauma.

This context makes its imagery of self-harm and other disturbingly gruesome events that I won’t spoil here feel justifiable. To really understand the complexities of Giulia’s condition, so too must we endure the horrors that she does.

To see how blurred the lines between the supernatural, reality, and the ever-encroaching war are in her eyes, the game almost requires the obscene imagery that it forces you to sit through — and in some cases play an active part in –, the unsettling, screeching, staccato soundtrack only heightening the disconcerting nature of the scenes.

Martha Is Dead is strongest when it really pushes those boundaries. When it leans into its supernatural and explores the complexity of the human mind, there’s nothing else quite like it out there right now. What I uncomfortable? Absolutely, but it got my heart pumping, a scrunched-up wince stretched across my face as I quite literally dug deep to uncover a truth.

But these moments are left flailing in a sea of ​​otherwise mundane gameplay and to-ing and fro-ing between the same tired locations. You’ll often find yourself fetching items and taking photos with a multitude of different settings and equipment that the game’s main objectives seldom require you to interact with on any meaningful level.

The woods are a prime example of this and make up one of the few main environments you’ll have Giulia traipse through. The first few times I explored them, they had such an unsettling err of mystery and intrigue about them. 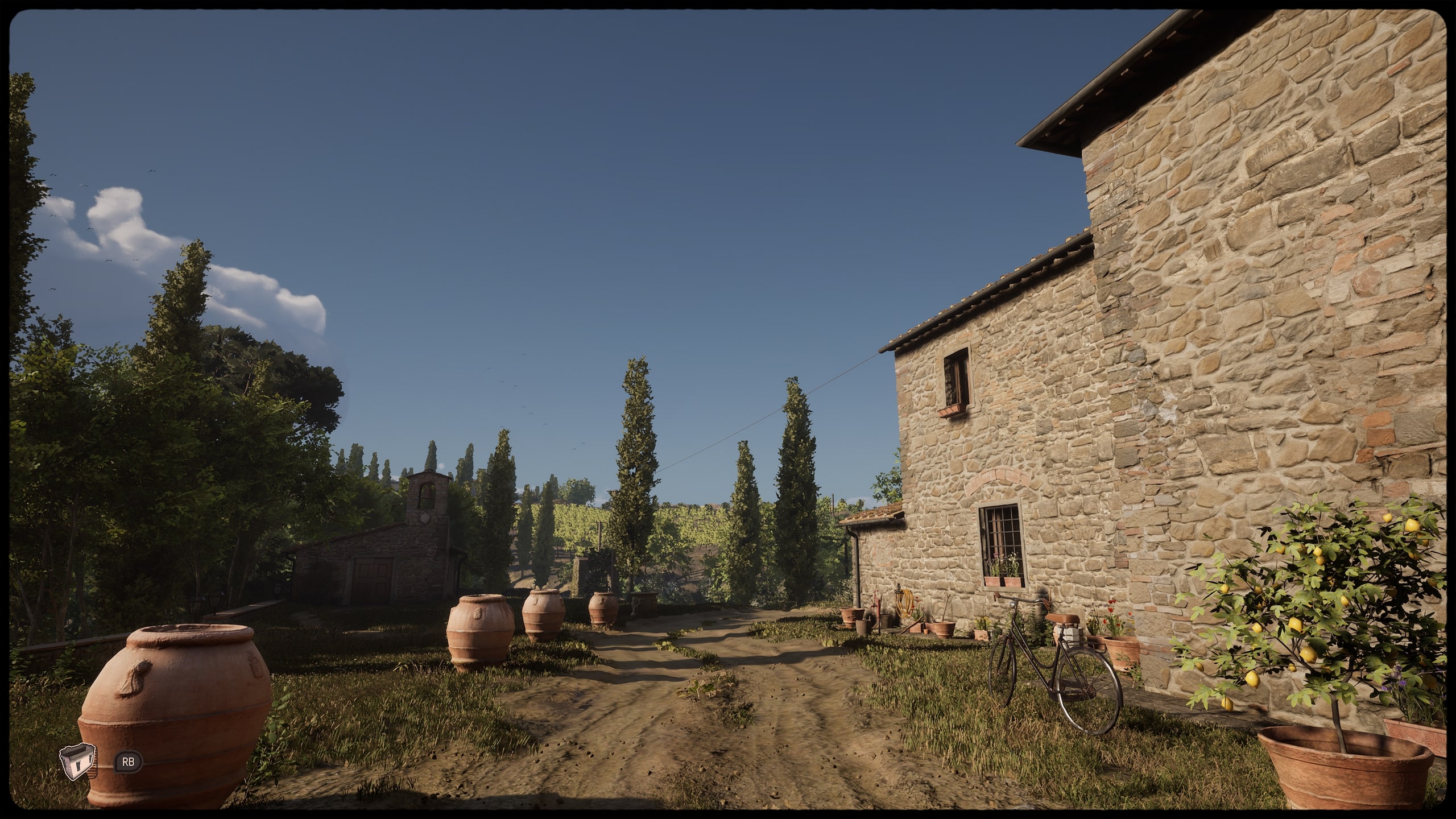 A myriad of paths winding their way through the trees, some leading to dead ends, others weathered gravestones or the tired ruined remains of a building. Even the prospect of going in there at night had me apprehensive. But after the fifth or sixth time of heading in and then returning to the relative safety of the family house, they lost all impact.

The constant back and forth between locations and snapping photos is made even more tedious by the incredibly slow speed that Giulia moves around the environment. Even running, she travels at a snail’s pace.

I’m sure this was done in part to ensure players soak up the incredibly detailed and beautiful setting that developer LKA has crafted, but it results in objectives feeling more like chores rather than something I truly looked forward to doing.

Simply put, there’s not enough variety or challenge in Martha Is Dead’s core gameplay loop to keep things fresh throughout its six-hour duration. The force driving you forward isn’t the desperation for more gameplay but to see what unexpected and harrowing turn the tale will take next.

It’s not all about supernatural and psychological spookiness, though, as Martha Is Dead also dabbles in the complexities of the encroaching war. The game provides a dilemma for Giulia that players can follow through a series of secondary objectives, including a Morse code puzzle that is far more challenging and interesting than just about anything else I did in the ‘main questline.’ 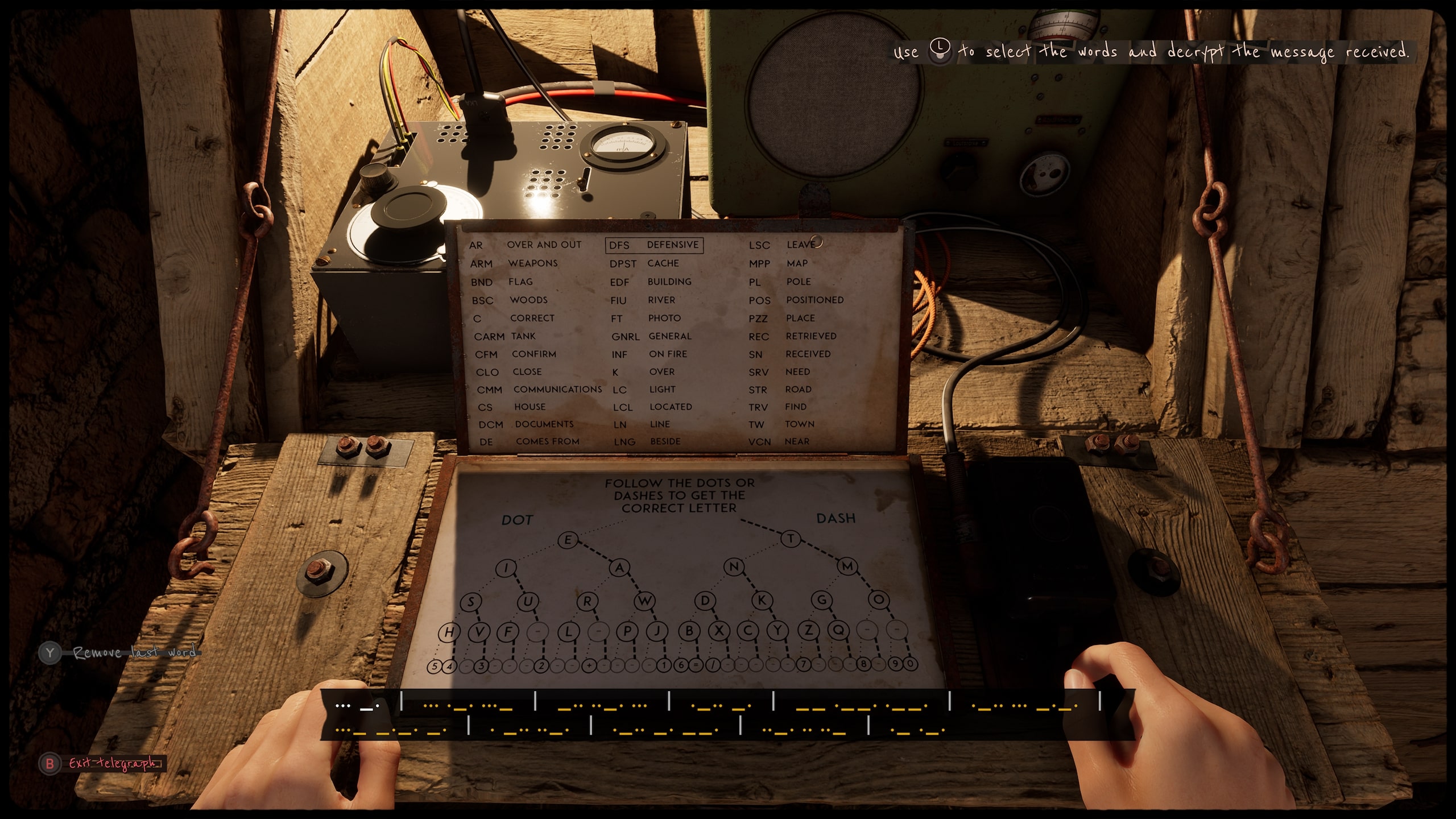 Alas, I was never able to complete the questline. When I was ushered back to the telegram machine to confirm I’d done as I was requested, it was nighttime, and the sheet of code words was impossible to see, even when turning the game’s brightness setting up entirely. I mean, just look at it… 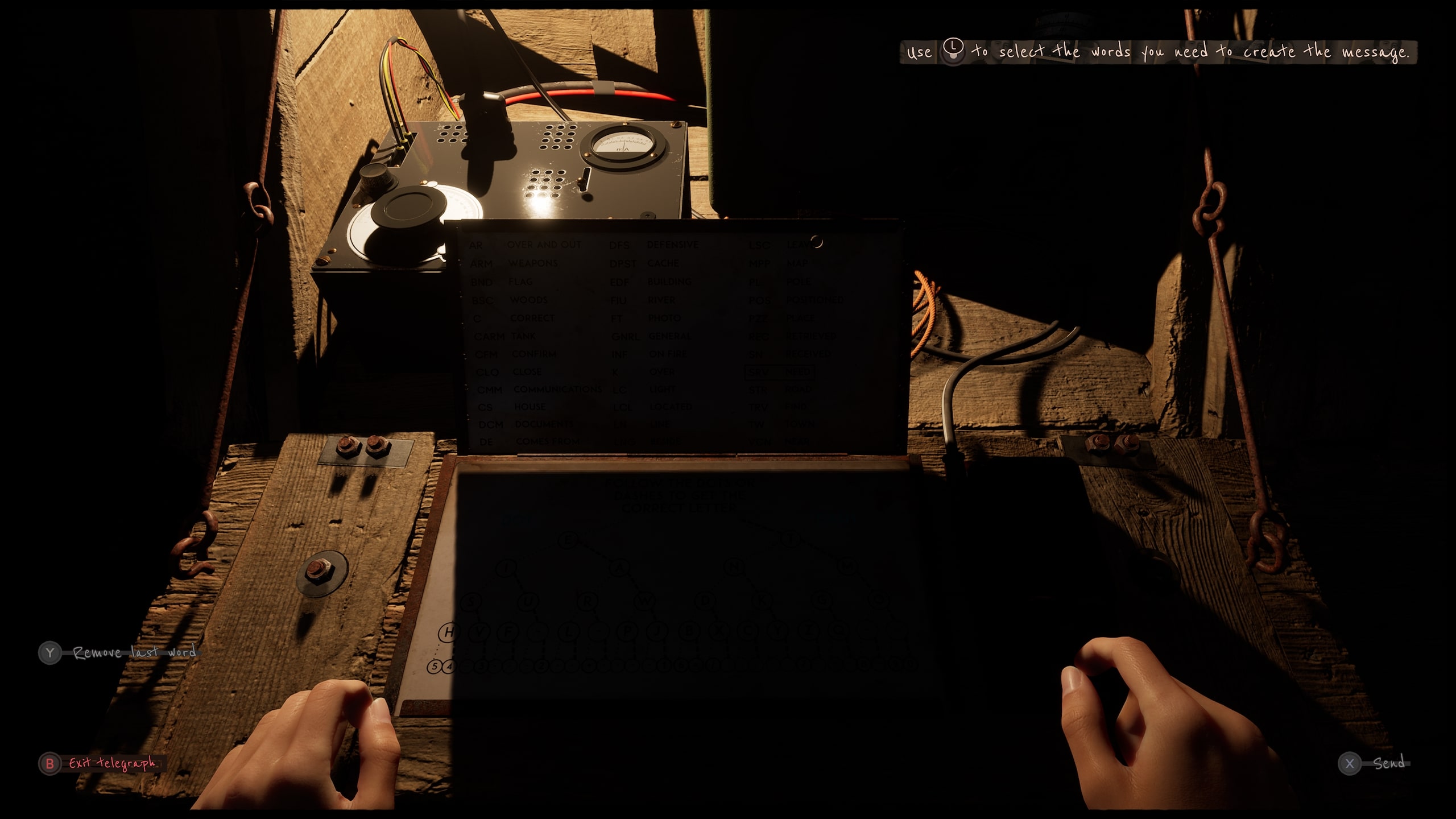 I even tried getting out Giulia’s lighter to help illuminate the sheets, but she puts it away when you interact with the puzzle. As far as I could tell, this was the earliest point in which I could complete that step of the objective, too, as the game has a tendency to lock off different areas of its environment in order to funnel you through a specific story beat. It’s frustrating and only further highlights the annoyance of the turtle-paced movement of Giulia.

The game’s also just generally a bit rough around the edges, and while I appreciate the development team is a mere 10 people, I encountered game-breaking bugs that forced me to dashboard and reload the game on no more than five different occasions.

In one instance, I fell through the map during one of the game’s rather bizarre sentence-completing dream sequences through the forest. In others, I would try to interact with objects, only for the game to tell me I couldn’t at that time, before disabling all movement controls, leaving Giulia frozen in the spot, retorting the same infuriating lines of dialogue telling me what I knew I needed to do but couldn’t.

The solid circa-60 fps framerate I got when exploring the house, and other indoor areas jarringly drops to somewhere below 30fps when exploring the forest or the house’s surroundings, too, which never failed to detract from a truly beautiful environment. 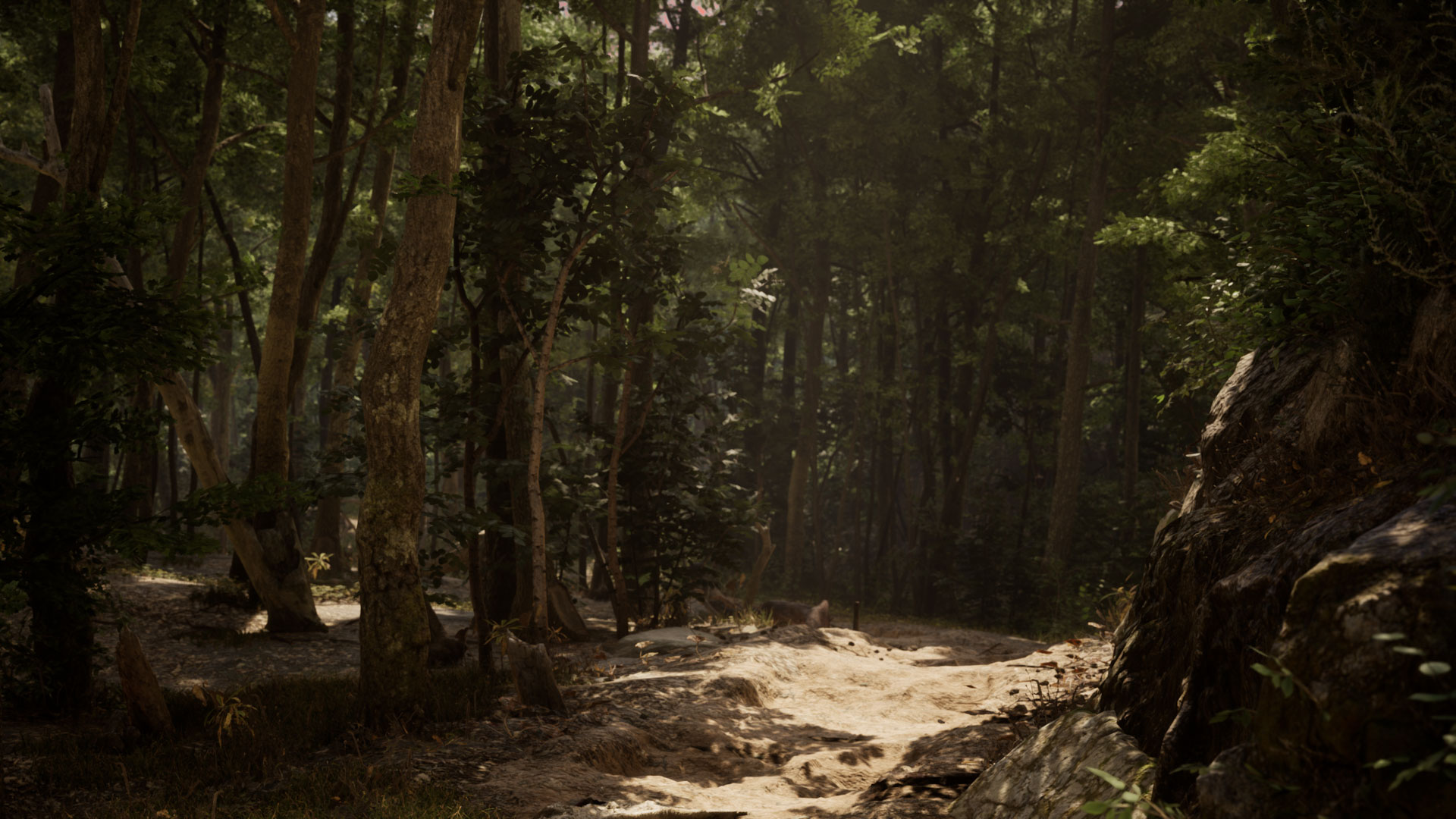 Yet, in spite of all of these things, I can’t stop thinking about Martha Is Dead, even if I’m not entirely sure I was enjoying it by the end. It shines when it really leans into its psychological thriller/ horror elements, but they feel so sporadic and fleeting in what ultimately becomes six hours of fetch quests and a photography mechanic that lacked any meaningful depth.

It’s not some gore-fest, but its dark and uncomfortable themes of self-harm and mental illness are just as unsettling as any ungodly monster that’s chased you down a corridor in your next favorite horror title. I must tip my hat to the developers for not glorifying the trauma and problems that Giulia battles with throughout the duration of the game, even if I felt like they could have pushed it that little bit further to really hammer the point home.

The development team has to be applauded for pushing the boundary of the horror industry with its ideas. It’s just a shame that it stumbles so heavily when it comes to the execution and dilutes its strongest element with generic, repetitive gameplay. 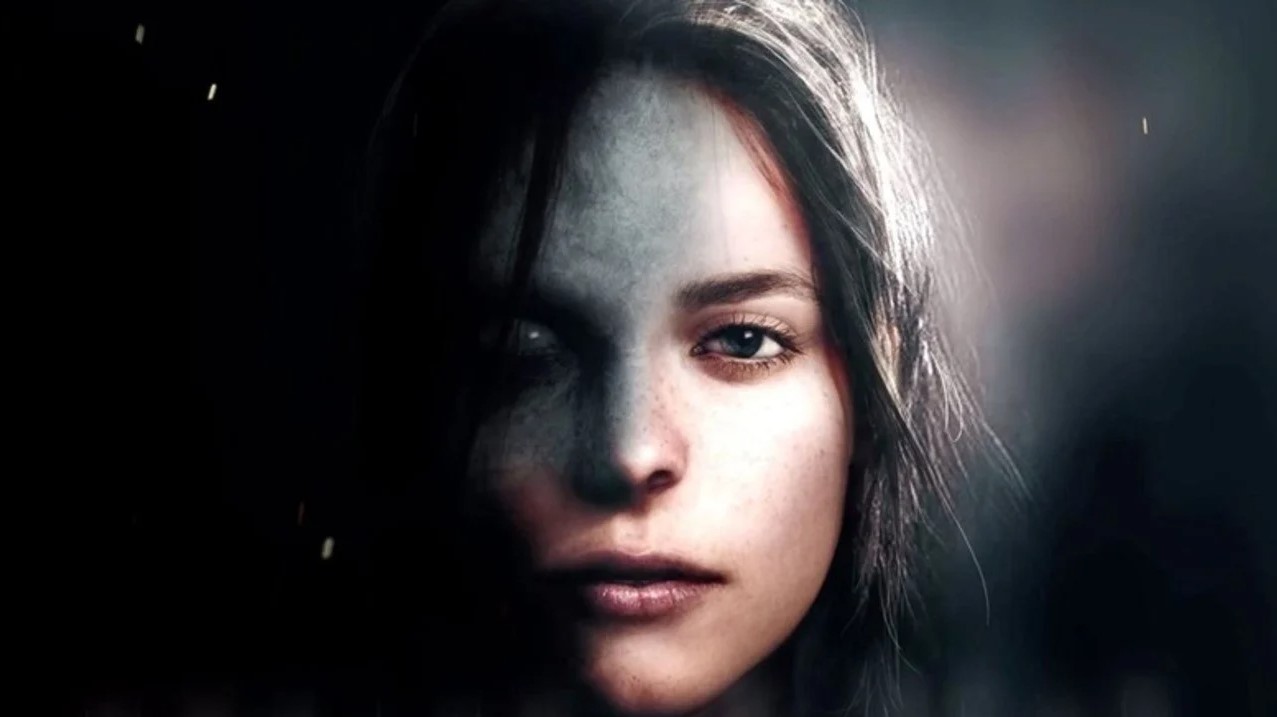 Can You Read My Hero Academia Manga Online for Free? Answered

guides Is the popular manga series available to be read for free online? Here's everything you need to know about your options. Published on...
Read more
Nintendo

The Nintendo Switch Online app for iOS and Android devices has been updated to Version 2.0 today and with the update comes a number...
Read more
Videos

8 Things Only Pro Gamers Know About The XBOX ONE

XBOX ONE SECRETS ONLY PROS KNOW. The XBOX ONE has been out for nearly half a decade and there are still some ... source
Read more
Nintendo

UK: 7 Nintendo Switch games in the top 10 this week

The latest boxed video game charts have come through via GFK for the biggest gaming market in Europe, the United Kingdom. Last week...
Read more