Horizon Forbidden West’s world is a massive one, built to be explored over long stretches of time. The vast, open wilderness is stunning and overwhelming, giving players the chance to roam freely around some of the west coast’s most famous natural sites and cities. There are towering sequoia forests, endemic to parts of Northern California, along with the desiccated Death Valley and its ocean of sand. You’ll climb mountaintops and iconic American landmarks like the Golden Gate Bridge. You’ll also swim lakes, caves, and oceans, which comprise one of the unique highlights of Forbidden West.

The way these elements weave together ultimately makes the exploration aspect of the game stand out. “One of the first things we said when we started development was that we wanted to focus more on variety and density,” Mathijs de Jonge, director of Horizon Forbidden West, told Polygon.

Swimming is a key part of this: It’s beautiful, and best of all, it’s absolutely seamless. Outside of games specifically dedicated to swimming, I’ve typically experienced bodies of water as gating mechanisms. When I can swim, it’s often with a limited endurance bar—or it might be on the back of a creature, like in Pokémon Legends: Arceus. In Forbidden West, there’s no running around lakes to avoid falling in, or tiptoeing around waterfalls. I leap the fuck in. There are brimming ecosystems in there, crumbling American landmarks, and tons of collectibles.

Though Aloy is initially limited by holding her breath, there’s luckily a Diving Mask tool that allows her to breathe infinitely. Admittedly, swimming can feel graceless before finding this tool, as quests make Aloy navigate labyrinthian underwater passages. Stick it out and get that Diving Mask, and swimming becomes truly liberating and exciting. It turns the game into one of my all-time favorites for exploration.

Once you have unlocked your base, and have spoken with GAIA, I would highly recommend getting that Diving Mask as soon as possible. Here’s how you can.

How to craft the Diving Mask for infinite underwater breathing

In order to craft the Diving Mask, you will need to have exited The Daunt, unlocked your base, and uploaded the GAIA kernel. Crafting the Diving Mask is an early part of The Poseidon subordinate function quest line called “Sea of ​​Sands.” When GAIA tells you to choose which of the three subordinate functions you’d like to pursue — Aether, Poseidon, or Demeter — select Poseidon, and head to Las Vegas.

When you arrive, the map will show a large, yellow, circular area. You are looking for a building that appears to be a pagoda, but has water spilling out of it. You will know it’s correct as Aloy will call it a “Tower of Tears” when she sees it. The easiest way to locate it is to head to a high point, and search for the building.

To get inside, there is a grapple point on the edge of the first floor, close to where the water is pouring out. You’ll encounter three NPCs who have been attempting to dive into the recently flooded building. Speak to Morlund, and he will give you the quest to craft the Diving Mask. 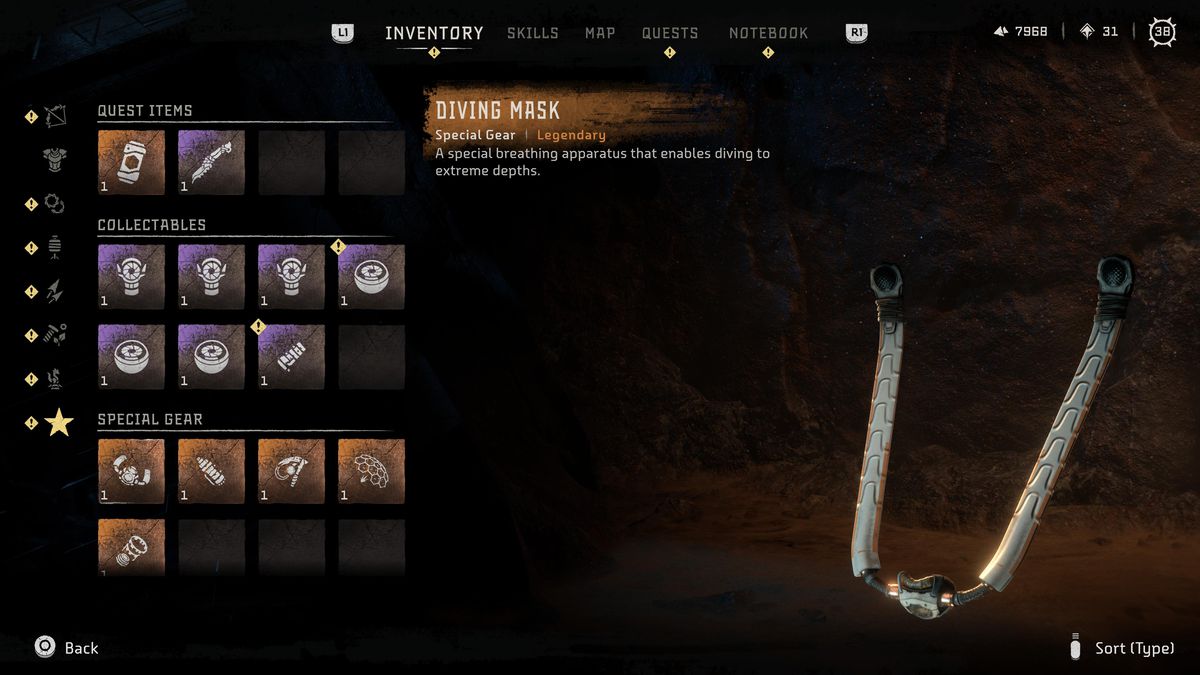 In order to craft the Diving Mask, you will need three items:

To obtain the other items, activate the hunting objective portion of the quest line, and follow the cues to activate Aloy’s focus. The focus will reveal tracks that lead Aloy to a Bellowback and Leaplasher site. Bellowbacks will have Synthetic Membranes; Leaplashers will have Machine Knee Caps. You may need to kill several to obtain the items.

Afterwards, head back to the pagoda, speak with Morlund, and craft the Diving Mask at the workbench inside the building. You’ll now have it permanently, and it will activate instantly when you jump into the water — no need to equip it.

What makes swimming underwater so special 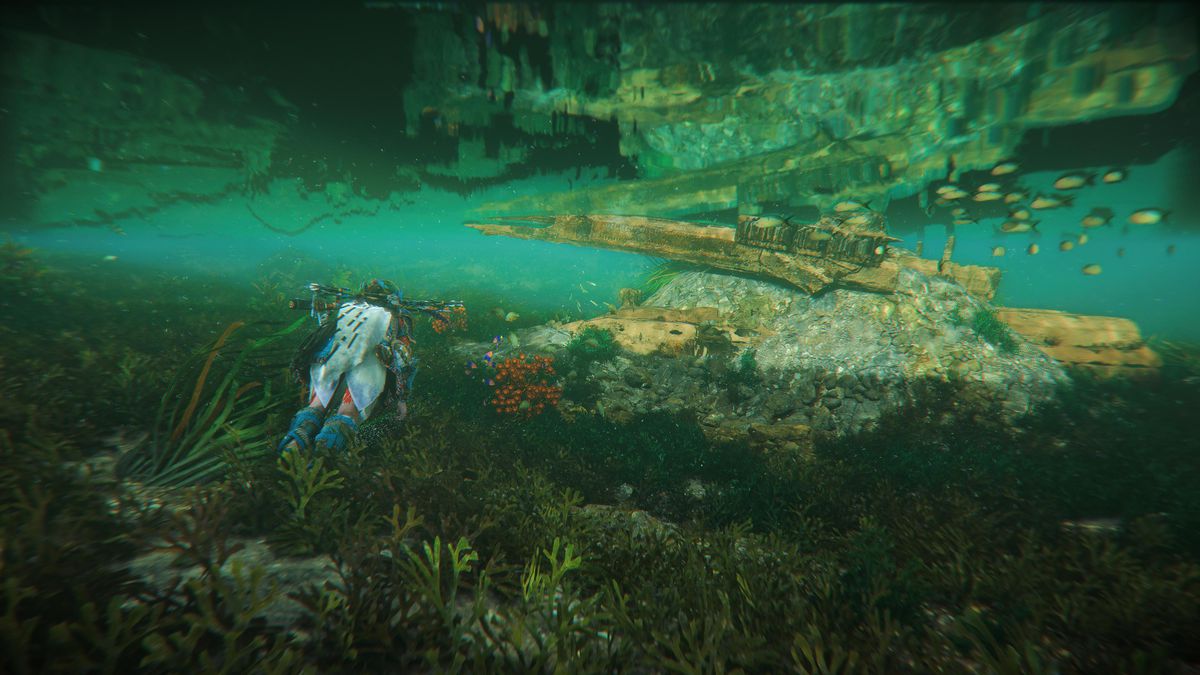 As in real life, exploring underwater in Forbidden West feels expansive and free — in larger bodies of water, like the lake (likely based on Lake Mead) which players can first run into in The Daunt. At that point, you won’t have infinite underwater breathing. But once you unlock the Diving Mask, the options expand beautifully — allowing players to free swim the entirety of the large lake, swimming past schools of fish, and exploring the many secrets that lie in its depths. This is just one of many many hidden nooks that will become available once you have the Diving Mask.

This sense of underwater freedom is largely by design. The developers chose not to make combat underwater an option, instead giving players stealth options in the form of tall kelp. “I guess it’s quite similar as on-ground movement; the mechanic itself needs to be responsive and you need to feel that you’re in control,” de Jonge said. “Next to that, the surroundings matter, and the player needs options to avoid underwater combat with machines. We didn’t even attempt to develop that as player movement is just too limited under water and machines are large, fast, and deadly.”

Some of the game’s most cinematic moments happen when Aloy is underwater. You see some of Las Vegas’s most famous hotels, imagined in a post-post-apocalyptic future that involves light shows and holographics. This is where Aloy first encounters one of the game’s most lethal, intimidating enemies, the Tideripper, a Loch Ness Monster-inspired machine. It’s also where players get to see how charming Burrowers are when they swim. The frustratingly bouncy entry-level enemies become otter-like underwater, chittering and winding around. 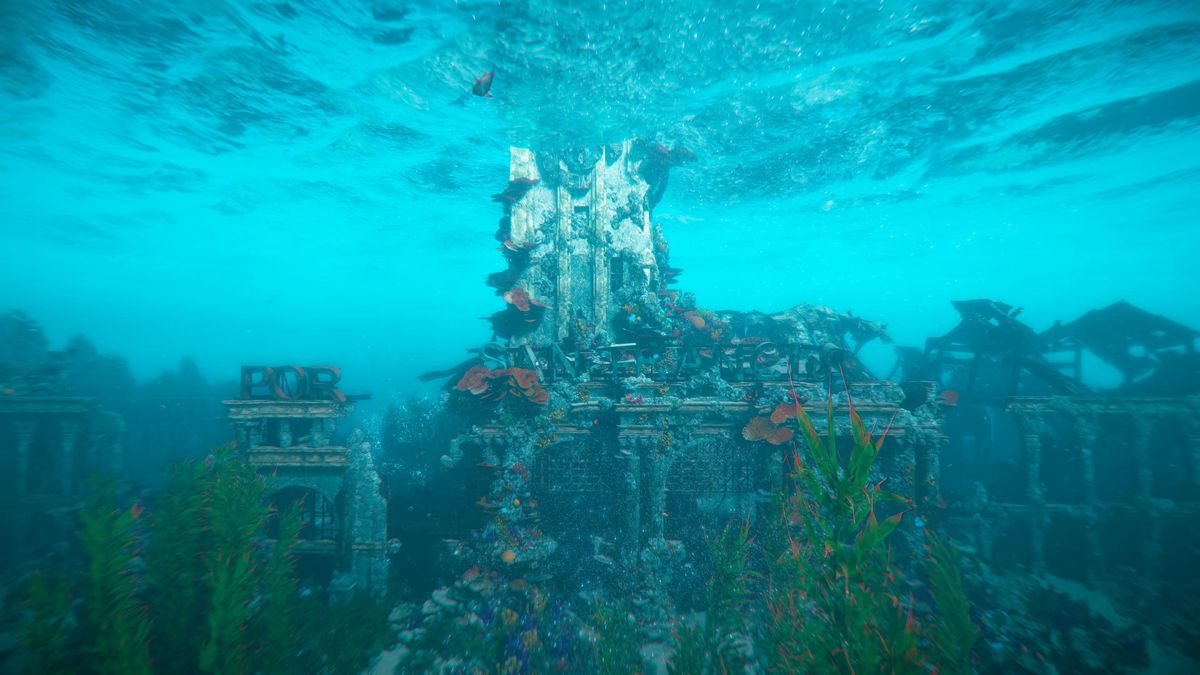 Exploring underwater San Francisco, in the final stretches of the main quest, also feel like a gift. It’s haunting, seeing parts of the familiar city submerged — especially as it’s a city I’ve lived in. The post-apocalypse hit home as I swam around the Ferry Building in its oceanic grave. These are just a few of my favorite memories from my time in Forbidden West’s incredible underwater environments. My Diving Mask and I will be making many more.

Many of Capcom's past curation efforts have yielded uneven affairs. Where some packaged together four different versions of the same Street...
Read more
Reviews

Marcel the Shell with Shoes On Review

When I saw the marketing for Marcel the Shell with Shoes On, I couldn't help but notice that they kept stressing the line, "Everybody...
Read more
Playstation

News Final Fantasy XIV director Naoki Yoshida is one of the most popular developers in the world and a fan brought that to the next...
Read more
Games

The next add-on for The Sims 4 is going to get players into some hairy situations. A new game pack, Werewolves,...
Read more