Ever since I showed off my first deck of cards on the school playground, I thought of Yu-Gi-Oh! as an even more stylish, low-key, older cousin to Pokémon. Whether it’s Yami Yugi’s spiked hair and belt-sized choker, or the intricate designs of monsters like Blue-Eyes White Dragon and Exodia the Forbidden One, the series always felt a little more mature and a little darker than other popular series of the time like Pokémon or Digimon—both of which I also loved.

So when Yu-Gi-Oh! Master Duel, came out and topped Steam charts in January, I decided to check out what the hype was about. It turns out that Yu-Gi-Oh! is still cool in the year 2022, and Master Duel makes the card game more approachable and fun than ever. Long-time players have a new way to play a favorite classic on console, Windows PC, and mobile. And though the free-to-play game is dense with various currencies, challenges, and rewards that can be hard to parse, strong tutorials invite newcomers in.

In case you’re unfamiliar, Yu-Gi-Oh! is a turn-based card game inspired by the manga of the same name. In the game, you try to deplete your opponent’s life points, or “LP,” by summoning monsters, laying trap cards, and using special magic bonus cards. Yu-Gi-Oh! Master Duel is a glittering, nostalgic call-back to early Yu-Gi-Oh!, but in a free-to-play card game format that makes for an enjoyable, snappy experience. Those who played before will recognize the brown, gold, and black swirl design on the back of the cards. Gameplay strategy is just as satisfying as the original card game, and you can play with classic cards, or switch it up and have the game teach you about the new mechanics that have been introduced over the years.

But the game is just as welcoming to newcomers. If you haven’t played Yu-Gi-Oh! in a while — or ever — the game is generous with helpful tutorials. There’s a standard tutorial for the basics, as well as other optional guides that go into greater depth about summoning special monsters or playing specific decks. As a returning player, I appreciated having the game guide me along, because there were times when I didn’t know when or where to play my cards. The game takes care of those prompts for me.

Although there’s a lot of structure to support players, Yu-Gi-Oh! was, and still is, a game for those who enjoy reading cards with dense text, and trying to make sense of them. The game doesn’t teach you how every single card works, and so you’ll have to parse quite a bit of text to figure out how to actually play certain ones. I loved recognizing disparate rules or specific monsters, and then reaching into the annals of my five-year-old brain to realize that I did, in fact, remember some rules of the game.

The game is also encumbered by the confusing complexity that’s come to dominate so many free-to-play games these days. The game has various currencies that you can earn or buy, along with numerous challenges and rewards. Opening virtual packs is a sensational feast for the eyes and ears, but it’s in service of getting people to buy more digital packs (with in-game currency or real money) — and it’s incredibly easy to get hooked. 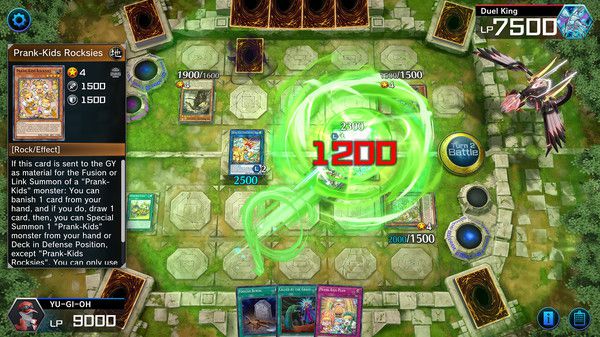 That said, don’t let Master Duel’s density deter you. There are so many details that really make this digital version of the card game shine. The animation and sound effects feel incredibly tactile, giving it a sharper than real-life feel that is hard to nail in the digital release of a physical card game. When you play a card, there’s a sound effect and animation that makes it feel like you’re dramatically slapping it onto the table. As you or an opponent loose LP, your side of the mat will crumble and break down, as either player gets closer and closer to losing. Drawing cards also feels exciting in this game, as each card I pick might be the one to save me. (Even if it doesn’t end up coming true.)

Yu-Gi-Oh! Master Duel can feel like a lot to wade through, thanks to relearning the cards and all the added free-to-play mechanisms. But the game still makes for a nice shared evening among friends, as all of us relive the good old days, one card at a time.

We admit, we're fans of Razer. But to be honest, we don't really use their audio products. But when they let us...
Read more
Videos