Elden Ring has the advantage. Our beginner’s guide will even the odds.

In any FromSoftware game, the challenge is a huge part of the fun, and we won’t take that away from you. We’re just here to teach you the language of Elden Ring — and the faster you become fluent in the way that this game whispers its secrets to you, the better you’ll be. We’ll help you understand classes, leveling up and tie-breaking between stats, exploring the open world, stealth, and more.

Match your class with your play style

Elden Ring divides its characters into classes, with points pre-poured into various attributes. Even the gear you begin with is matched to those stats.

Here’s how that works out, practically speaking, which can also see in the gallery above:

There are two basic ways to play a game like Elden Ring. Well, actually, three:

We’re big fans of the third option, and that’s why we chose the weirdo hybrid Prisoner class, which holds a sword in its right hand and a catalyst in its left. It seemed like the best of both worlds. Sometimes we could attack from a distance. Sometimes we could get stabby. We don’t regret a thing.

In Elden Ring, pretty much like in any open-world game, there’s a balance between your desire to explore the vast world and follow the critical path and do the required things. If you’re anything like us, there’s also an attendant anxiety as you wonder at every possible moment if you’re in the right place doing the right thing.

Our solution: Follow grace’s lighted path, until that doesn’t make sense — until, say, you run into a particularly difficult section and you’re frustrated. Assume that Elden Ring is telling you that you’re not quite ready. Or say you see something in the distance that looks interesting. That’s just as valid. Wander off, assuming that wandering will help you when you return to the critical path.

But you don’t have to take our word for it. Elden Ring teaches you this lesson within your first hour. Grace points you to Stormgate, through Gatefont Ruins. But if you veer off that critical path, you’ll find the Agheel Lake North site of grace, where you’ll get a horse.

Relax, we told ourselves. Find your own balance. Listen to the game. Follow the guidance of grace, those little shafts of light that point you in a general direction. If the things that happen in that general direction are crushing you, interpret that as an indication that you’re not supposed to be here. Go off and explore.

Exploration is genuinely never a bad idea. And it’s often a good idea, because you may (and often will) stumble upon items and people who will help you when you return to that brick wall you were recently beating your head against.

We know that we just talked about this above, but it’s worth a section of its own. Early game exploration is the least dangerous part of Elden Ring. There are dangers. You can die. But most aren’t terribly dangerous dangers. Why, it’s as if the developers at FromSoftware created an open world and wanted you to feel relatively safe to explore it!

The other advantage of exploration is that you’ll find hidden things around the world. West Limgrave has items and caves and catacombs and enemy camps and characters to meet and quests to start. Pick a direction, and start exploring. There is something interesting everywhere.

When you see the tombstone icon, you can summon spirits like wolves to help you. Image: FromSoftware/Bandai Namco via Polygon

You’ll get a Spirit Calling Bell other Lone Wolf Ashes early in your game, and every time you see a ghostly gravestone icon on the left of your screen, you can summon the spectral wolves for help, for the cost of some FP, which stands for Force Points — that’s the blue bar in the upper left corner of your screen. This is a great way to get into the habit of calling for help early in the game.

To borrow a phrase from another franchise: It’s dangerous to go alone. From software built systems to facilitate cooperation. There’s no prize for doing it all yourself. You won’t get a medal for making an already notoriously difficult game even more difficult. Ask for help — at the very least, you’ll distract enemies so that they fight others instead of you.

A strategy for leveling up

You picked a class. You’re in the world. You’re defeating enemies. You’re earning runes. You want to level up, but it’s intimate.

When in doubt, play to your class’ strengths. If you wield magic, put some points in Intelligence.

Next, consider anything that’s annoying you. If you’re swinging your weapon, but you find yourself running out of stamina, pour some points into Endurance. If you’re dying a lot, raise your HP with Vigor.

Finally, look at your weapons, specially the Attribute scaling section. 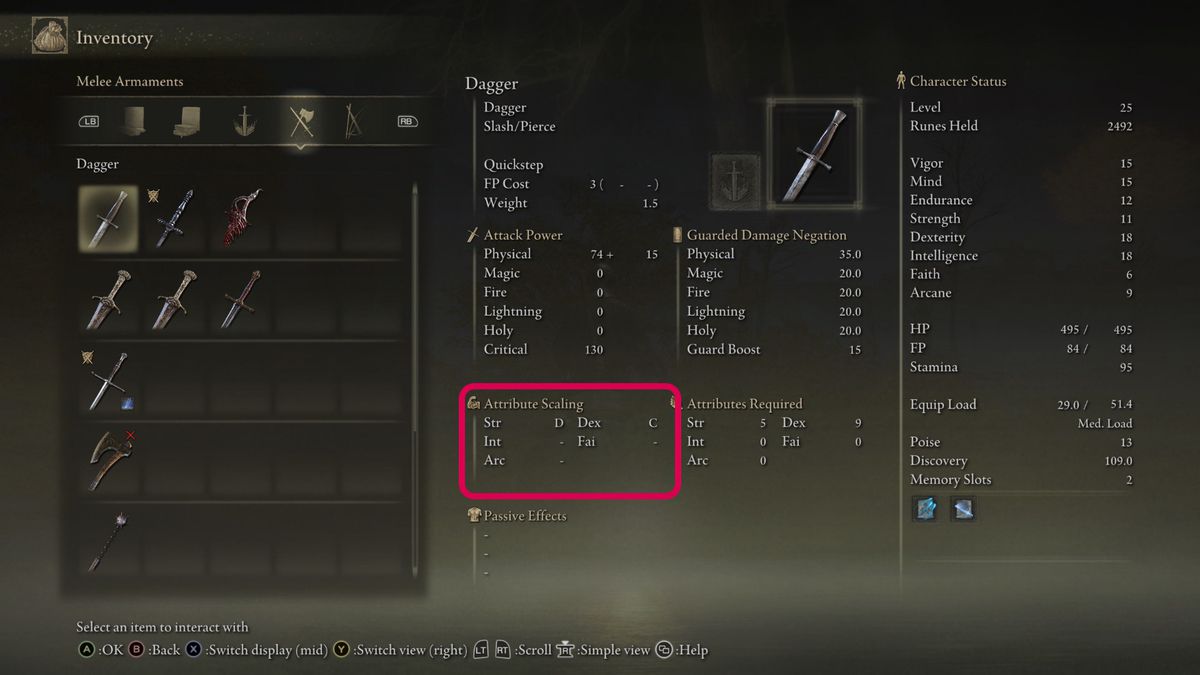 Consider the lowly dagger. If that’s your weapon of course, the Attribute Scaling section of the item’s description tells you that it scales to streettight and dexterity — and more to the latter than the former. So pumping a point into Dexterity, in general, will make your weapon more powerful.

Pretend that Elden Ring is a rhythm game

We’ve been preaching this message for years: FromSoftware games are notoriously difficult, but they’re also fair. That’s why we fell in love with them so long ago. Any game that puts Prepare to Die on the box had better be fair. Otherwise, it’s just senseless punishment.

So keep this in mind: Almost everything that you can do to your enemies tends to be the same things that your enemies can do to you. Thing is, you’re human. They’re not. You can figure out what they’re going to do most of the time, because there’s so much repetition in Elden Ring. Pay attention to their moves, and attack and defend accordingly.

In fact, we’ve long thought of Soulslike games as rhythm games. At any given moment, you’re watching what’s happening now, thinking about what just happened, finding patterns, and anticipating what’s coming next. That’s as good at describing Guitar Hero and Rock Band as it is at describing Elden Ring.

Enemies in Elden Ring telegraph their moves before attacking. Learn the patterns, and you’ll earn success. Don’t mash buttons. Don’t panic. Watch what’s happening, and you’ll be shocked to find how long a boss raises his hand over his head before attacking — which is long enough for you to roll out of the way.

Enemies have tells. You’re essentially dancing with them. Let them make the first move, and plan your response accordingly.

Is it frustrating sometimes? yup Elden Ring demands, well, if not perfection, then something pretty close to it. You may have to fight a boss a dozen times, but every time is a learning opportunity. And if you’re paying attention and learning the dance moves, (almost) every attempt will be a little better than the last.

Never fight more than one enemy at a time

Even the weakest rats in a pack can ruin your day. Divide and conquer. Kite single enemies over with ranged attacks. Kill the dude who’s going to blow the horn and alert the media that you’re here. Crouch, sneak up, and backstab.

Stealth is a real thing in Elden Ring. From Software put it into the game. Use it to your advantage.

If you find, say, a stretch of road where there are a dozen enemies in front of you, look around. You see that grassy patch to the left? You could tiptoe through there, hiding from enemies, pulling off spectacular backstabs. Stealth is great. Attracting the undivided attention of several enemies, not so much.

Race Clicker codes to get candy and wins (October 2022)

One of the best things developers can make for players is promo codes. Many gamers are waiting for new promo codes more than...
Read more
Games

Fruits Basket -Prelude- is an incredible new story for the beloved anime. The different arcs of all the characters are a delight to...
Read more