Described by developer Serenity Forge as a “romcom adventure game,” Land of Screens is both charming and decidedly more grounded than similarly sentimental games. While it examines the weighty process of how we build ourselves back up after suffering a loss, rather than sending players down the path of introspection, it opts to be a bit more simplistic and deliver just one pertinent message: There’s a whole world outside your phone screen and you might just be missing it. However, in taking this approach and focusing so entirely on this one message, Land of Screens ultimately comes across a bit too reductive and preachy to deliver it as subtly and powerfully as it could.

Land of Screens begins as life as Holland knows it comes to an end: After five, long years together, her partner has just called it quits on their relationship. Before she even has the time to process her feelings and what this means for her life, Holland finds herself pacing around her bedroom thinking about how others will process the news, and thus begins to search for the right way to share the news on social media . As she debates word choice and attempts to find the middle ground between detached and devastated, she realizes she’s been tagged in her ex’s breakup announcement, which naturally leads to a wave of comments and bad feelings she’d rather ignore.

Desperate for some sort of outlet, Holland racks her brain for someone she can reach out to. However, it doesn’t take long for her to realize that–thanks to being in a comfortable relationship, her busy work schedule, and the advent of social media–she’s failed to actually nurture her relationships in a meaningful way and feels a bit isolated. Holland ultimately decides to pay her ever-accommodating childhood best friend, Cody, a visit, tackling on a quick detour to her already busy weekend filled with a work conference and a family reunion. She quickly packs her things and heads over to Cody’s home, realizing a bit too late she forgot her charger and her phone is nearly dead.

While Holland finds little ways to keep her phone just charged enough to reach the places she needs to go (and be reminded of her breakup), what ensues is a series of situations where she is tasked with getting people off their phones in order to foster connections and make people a bit happier. These events take the shape of short, point-and-click adventure sections, wherein you must walk around a given environment and figure out ways to make people lose interest in their tablets, phones, and imitation Nintendo Switches. Each of the game’s handful of levels requires a bit of light puzzle solving as you talk with folks and interact with objects in an attempt to figure out what will coax them away from the blue light’s glow. However, these puzzles–along with much of Land of Screens–suffer from one major drawback: They’re just way too straightforward.

Land of Screens’ few puzzles require no strokes of cleverness or close inspection to resolve. Instead, Holland must merely talk to people until they have nothing left to say and things more-or-less work themselves out. While some simplicity is nice, ultimately these tasks end up feeling like small-scale fetch quests as you click back and forth between characters.

Even more unfortunate is that the game’s narrative also suffers a bit from the same over-simplification problem that makes everything feel a bit too on-the-nose We all know that for all the benefits and conveniences social media, the internet, and technology as a whole offer us, there are just as many downsides. It’s all too easy to become dependent upon your digital devices and the validation of people who barely know you–it’s all too easy to trade in genuine happiness and your ability to live in the moment for the appearance of happiness and the ability to post about that moment. The entirety of Land of Screens is spent attempting to drive that point home, but unfortunately the game doesn’t go about it in a subtle or innovative way. At times, it feels a bit more like the game is lecturing its characters (and you) more so than it’s reflecting upon the issue in a sympathetic and insightful way.

A lot of this stems from the game’s lack of nuance. All of Land of Screens’ online-obsessed characters come across as caricatures, from the selfie-obsessed fitness bro and dog-loving girl riddled by anxiety, to online trolls and the kids at the family reunion who just won’t stop playing those darn video games. In addition, all of the interesting things that could have been said about how technology is a tool that can foster real-life connections are left unspoken. This is especially interesting considering Holland makes new friends on her journey that she intends to keep in contact with via phone or social media, engages with people who use the internet to interact with others/find events to attend, and speaks to people suffering from social anxiety. While the game’s core message is absolutely true–we are too reliant on social media at the expense of forming real connections to our others and ourselves–the way it goes about talking about it feels slightly belittling. 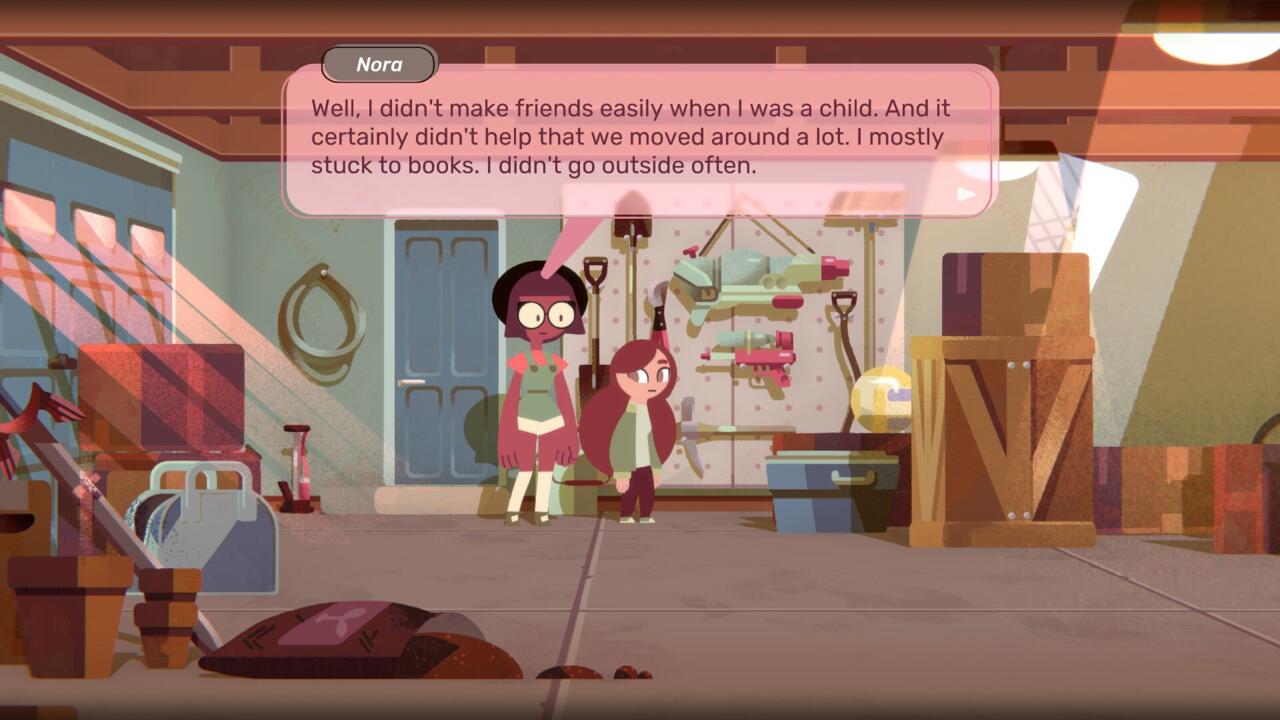 Holland and Nora have a heart-to-heart.

There is an undeniable sweetness, however, to Land of Screens. A large part of this comes from the game’s soft and lovely vector art style, which adds a youthfulness and charm you can’t help but admire. The message, while not expertly executed, is also incredibly earnest, and Holland’s journey to rekindle her relationships also leads to some tender moments that might make us reconsider our own approach to our relationships as well as where we draw our sense of self-worth from .

Ultimately, it is these interactions that could have elevated the game and provided more emotional depth if they were leaned into a bit harder. Rather than spend so much time forcing background characters off their phones, it would have been compelling to explore more of Holland’s internal narrative and relationships with her family, slightly estranged friends, and her potential new love interest. So much time was spent walking around, showing others the light rather than basking in that warm glow ourselves, a choice that would have made the game more impactful. Land of Screens ultimately feels like a predictable-yet-ending Netflix romcom–though think more Love Hard rather than Someone Great. 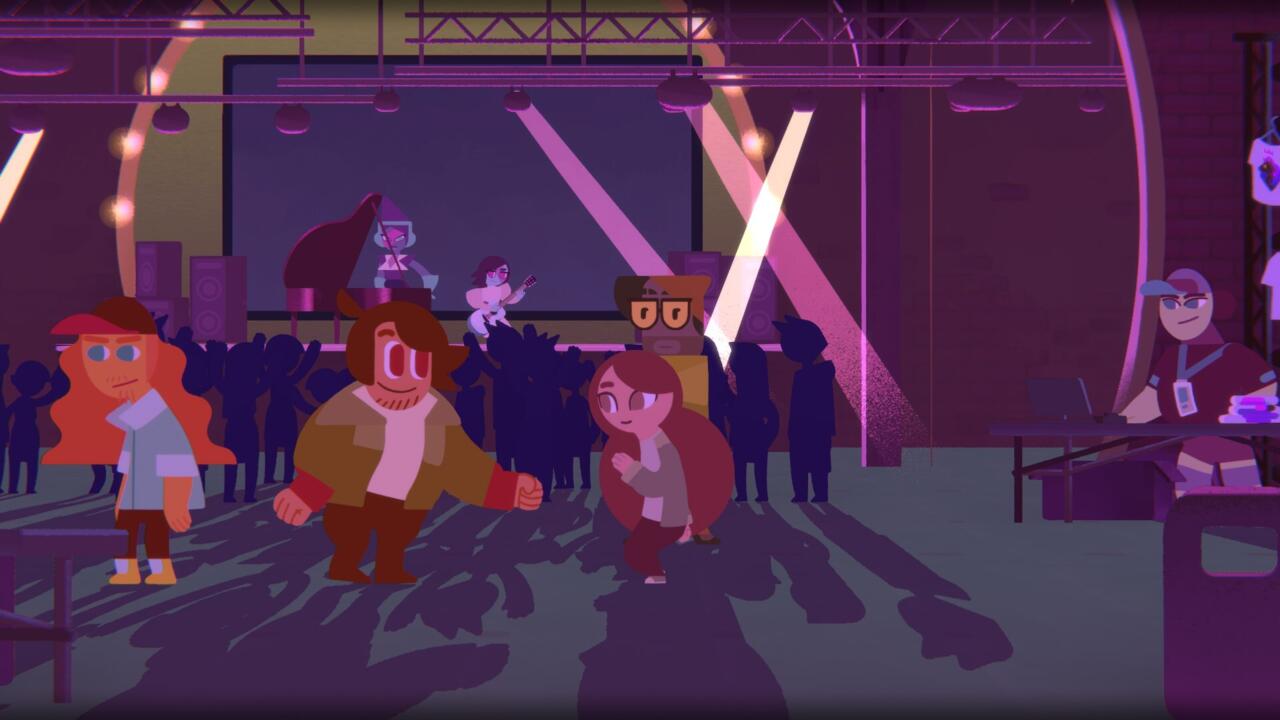 Holland dances at a concert.

The Mandalorian Experience: 74 Photos From The Star Wars Celebration Exhibit

As a special treat to those in attendance at Star Wars Celebration 2022, The Mandalorian showrunner Jon Favreau revealed that a special exhibit of...
Read more
Games