The future is coming… and sooner than you think (Picture: Metro.co.uk)

We’ve come a long way since the days of pixelation and plastic pew-pew guns.

Now gaming is a fully immersive experience, and we’ve come to expect the very best in graphics and AI.

But in order to pull all that off, you’re going to need some pretty high-tech equipment to match.

This year is full of exciting tech launches, from Samsung’s 55in rotating gaming screen to OWO’s haptic vest.

Read on for a sneak peek into the future of gaming.

Fast forward to 2017 and AlphaZero, the game-playing AI created by Google’s DeepMind, kicked the backside of the world’s best chess-playing computer game by teaching itself how to play from scratch in less than four hours.

While AI has made strides in one-on-one strategy games such as chess, which has been widely regarded as a meter stick for artificial intelligence, Sony AI just raised the bar.

Its artificial intelligence program, dubbed GT Sophy, is an AI capable of superhuman reactions and complicated racing strategy that can help it beat the most skilled human drivers in Gran Turismo Sport in back-to-back laps. 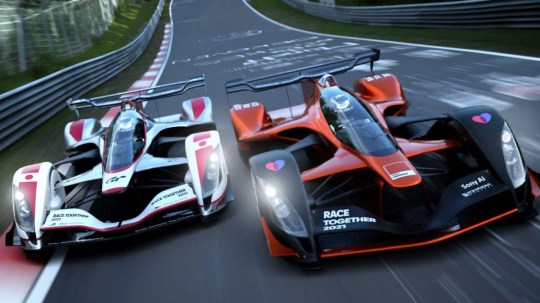 What makes this so impressive is that Gran Turismo requires real-time steering and acceleration decisions, themselves based on a range of factors including the positioning and behavior of other cars, the curves of the road and overtaking — tasks long considered too difficult for AI programs .

In order to pull this off, Sony used ‘deep reinforcement learning’, a method that involves the AI ​​teaching itself through trial and error.

In this case that meant it played Gran Turismo for 45,000 hours in order to figure out how best to navigate courses and leave video game drivers in the dust.

GT Sophy will join Gran Turismo 7, which launches on PS4 and PS5 on March 4.

But the AI ​​will be added through a later update, with developers promising it will play fair. Watch this space.

If you’re a massive gamer who happens to have pockets deeper than R&B singer Drake’s, the news of a beautiful union of Quantum Dot and OLED making its way to gaming monitors will be enough to get you a little hot under the collar.

For the uninitiated, OLED panels produce deep black levels and infinite contrast, while Quantum Dot screens bring plenty of vibrancy and contrast, as well as images so sharp they’ll practically have your eye out.

First up is Samsung’s 34in curved Odyssey G8, which happens to be the world’s first 4K gaming monitor capable of running at a 240Hz refresh rate, making it an absolute beast. Backlighting to match the onscreen action completes the set-up.

The more ardent gamers among you will be right in thinking there aren’t many games that can match those specs, and that you’d need a GPU with massive stamina to keep up, but this is still a great bit of crystal ball gazing into the realms of gaming possibility.

Samsung isn’t the only company unveiling a jaw-dropping monitor.

Alienware threw its hat into the ring with its 34in QD-OLED AW3423DW ultra-wide gaming monitor, which has a 3440 x 1440 resolution. It promises fluid gameplay and fast reaction times when paired with one of the best gaming laptops or PCs.

While Samsung hasn’t announced any pricing or availability information, Alienware says its display will arrive this spring for £960. Both gaming monitors will easily be contenders for the best of 2022.

Stealing the spotlight, however, is Samsung’s stunning Odyssey Ark, a rotating 55in gaming monitor. Taking immersion to the next level, this 4K screen can be flipped for a multi-view gaming experience for extreme multitasking, with the futuristic panel curving right over your head.

With the Odyssey Ark capable of stacking three different displays on top of each other, you can display a game, a Twitch stream and a view of friends on video chat simultaneously.

And since there’s plenty of screen space here, as well as a 16:9 aspect ratio and Quantum Mini LED screen technology, the image quality of the display won’t be compromised or squashed down. Don’t expect to see this until the second half of this year.

It’s no secret that Razer makes some of the best gaming laptops around. So news that it’s updating its Blade 14, 15 and 17 gaming laptops is definitely cause for a fist pump.

The next-gen laptops, each with screen sizes that pertain to their name, will feature the Nvidia GeForce RTX 30 Series laptop GPUs, with the new RTX 3080 Ti also up for grabs, for blistering graphics performance.

Expect major CPU refreshes, with the 14 getting AMD’s Ryzen 600 mobile processors, and the rest running on Intel’s 12th-gen CPUs for some of the most powerful gaming you can squeeze out of a laptop. All are available for pre-order now and they start at £2,199. 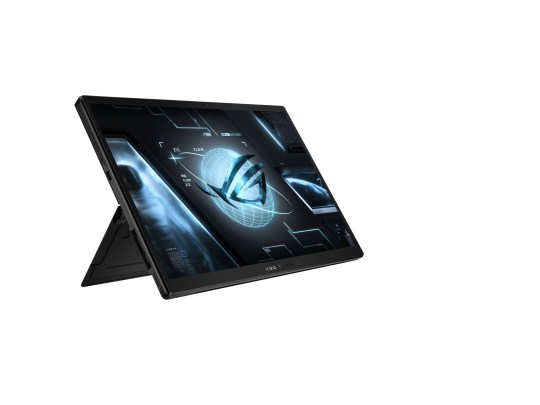 Elsewhere, Asus is flying the flag for two-in-one gaming laptops and the result is its ROG Flow Z13 (price and availability tba), which just happens to be the ‘world’s most powerful gaming tablet’.

While a lot of people use their metal and glass rectangles for a round of simply animated Candy Crush, Asus has its sights set squarely on serious PC gaming, complete with beefy Intel 12th Gen insides and FHD/120Hz or 4K/60Hz visuals.

And while it packs plenty of graphical grunt, you can grab some extra gaming muscle by plugging it into the optional XG Mobile external GPU enclosure.

With gamers spending at least nine-and-a-half hours a week gawping at their gogglebox, it makes sense to have a headset that lasts as long as gaming sessions do. 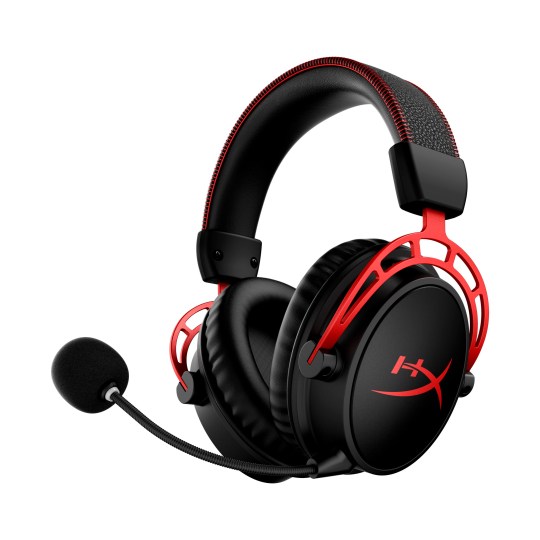 Shaking things up a bit is Razer’s Enki Pro HyperSense, which could be the next evolution of gaming chairs. The Enki gaming chair has full-body haptic feedback to make your gaming fully immersive. It’s unknown when it’ll be available to buy.

talking of haptics, Owo‘s haptic vest allows people to feel more than 30 different sensations while playing VR video games or taking a stroll in the metaverse. 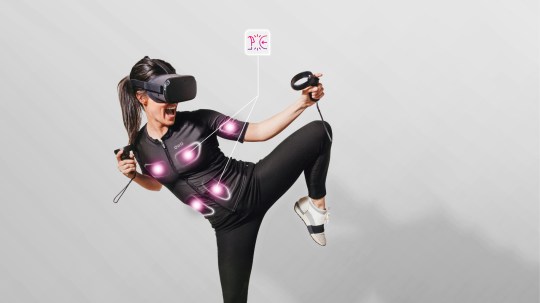 It’s all customizable through an app, and goes official in October for £330.

Check out these other new gaming concepts coming soon 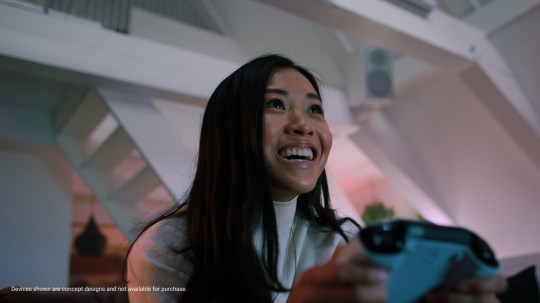 Pick up where you left off (Picture: Alienware/ Dell)

Alienware’s vision for cloud gaming involves being able to pause and resume sessions on different screens without restarting from the most recent checkpoint.

While current platforms allow players to switch to another device or screen, they can’t restart in the exact same spot.

This concept allows players to pick up where they left off from on any device. 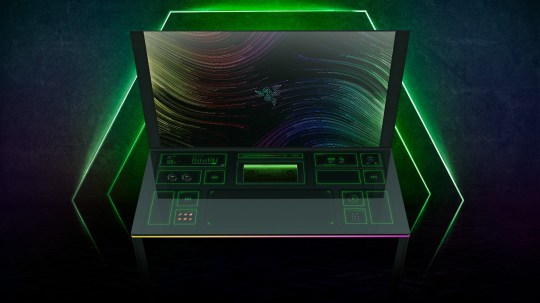 This seemingly Tron-inspired modular machine is a 77in OLED display and gaming desk fully loaded with a gaming PC that’s embedded into the tabletop.

Swappable modules allow users to configure their ideal battle station and, with everything from THX Spatial Surround Sound controls to Chat Viewer, this is one hell of a cool concept. 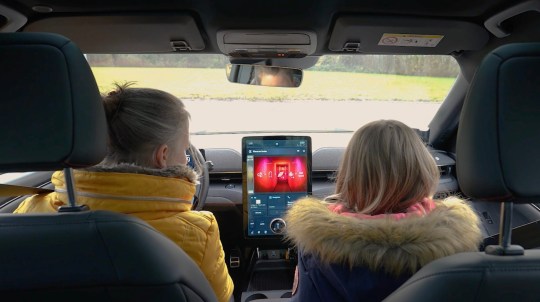 Can you finish the game? (Picture: Ford)

The Mustang Mach-E is one of the most popular EVs around and Ford wants to gamify it and allow owners to transform it into an escape room.

Challenging drivers to take part in a secret mission, the interactive game functions through its infotainment system, taking drivers on a real-world quest to deliver a package to finish the game. 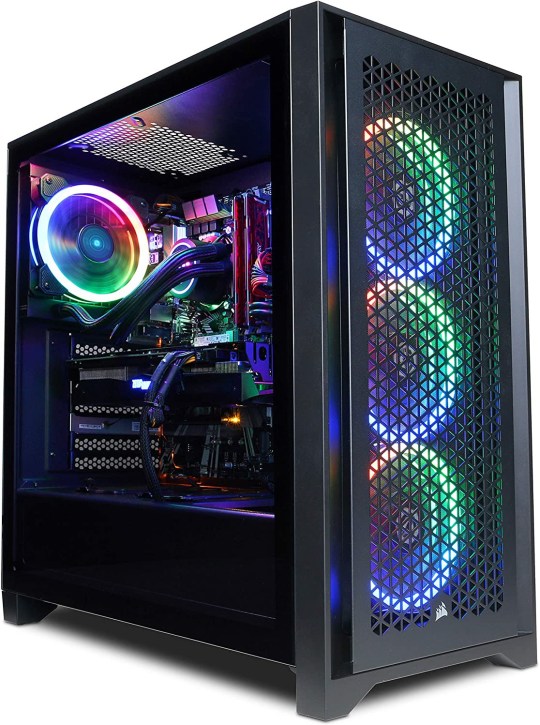 Tech that looks like it’s breathing sounds is the kind of thing nightmares are made of but that’s exactly what this concept PC housing is designed to do — and it’s actually pretty cool.

Following a lengthy gaming session, the case’s 18 mechanical vents are designed to automatically open and close when it’s gasping for more air to cool itself down.

This article contains affiliate links. We may earn a small commission on purchases made through one of these links but this never influences our experts’ opinions. Products are tested and reviewed independently of commercial initiatives.

MORE : The biggest products and shocks from Samsung’s 2022 Unpacked launch

Get your need-to-know latest news, feel-good stories, analysis and more

As Lord Of The Rings: Two Towers Turns 20, Weta Boss Reflects On The Milestone

The Lord of the Rings: The Two Towers...
Read more
Playstation

When Does The Cuphead Show Season 2 Come Out on Netflix?

guides Continuing to deal with the devil. Published on June 11, 2022 Zhiqing Wan Home » Guides » When Does The Cuphead Show Season 2 Come Out...
Read more
Games

My living room still has 3 TVs but I have regrets

A year ago I shocked the world with a deep truth: Two TVs in one room are better than one; and...
Read more