Destiny 2: The Witch Queen is nearly here, and it promises to be one of the biggest expansions the game has ever seen. But unlike with Destiny’s other expansions, a big draw for The Witch Queen is its story. Not only has Bungie been working to improve the Destiny universe over the past few years, but this is also a follow-up to The Taken King — the 2015 expansion to the original Destiny, and one that players still praise for its story.

So what do you need to know before you dive into The Witch Queen’s campaign? What the hell is a Savathun? A Throne World? A Caiatl? Maybe even what is a Guardian? We’re going to prepare you for this new adventure by only telling you the important stuff. And we’re going to do it in fewer than 1,500 words.

Savathun is The Witch Queen’s titular monarch, so understanding her history is going to be key to the expansion. Let’s start with what the Books of Sorrow covered in the original Destiny.

Long before the Traveler (a mysterious orb powered by Light, which we’ll get to later) came to Earth, it sat above an oceanic gas giant planet called Fundament. On Fundament lived multiple factions of what we call the Proto-Hive, including Savathun’s family. Her father was the Osmium King, and he had three daughters who were (at the time) known as Aurash, Sathona, and Xi Ro.

By speaking to a white worm familiar, the Osmium King discovered that the 52 moons of Fundament were lining up, and would eventually create a “God Wave” that would wipe out all life on the planet. But being 10 years old (the end of the Proto-Hive’s lifespan), he was too old to do anything about it.

Fearing that the king’s children were too weak to ascend the throne after his death, the daughters’ teacher, Taox, betrayed the family and led an assault on the Osmium King’s home. The daughters fled onto the ocean, taking the worm familiar with them. And thus began the quest to stop the God Wave.

After using a special ship to dive into Fundament, the daughters encountered the Worm Gods, who’d been calling out through the Osmium King’s familiar. The daughters made a pact with the worms, taking the creature’s offspring into them and the rest of the Proto-Hive on Fundament. These worms gave their hosts everlasting life and tremendous strength. But if the daughters or their brood ever stopped killing, the worms would devour them.

The worms transformed the Proto-Hive into the Hive enemy faction that Guardians face today. Aurash became Auryx and then Oryx, the new king (changing his sex to male). Sathona became Savathun, a “Mother.” And Xi Ro became Xivu Arath, a Knight. The three escaped Fundament with the Worm Gods and a whole host of Hive. The siblings blame the Traveler for the God Wave, and they’ve been attempting to eat its Light ever since.

The Traveler, Ghosts, and Guardians 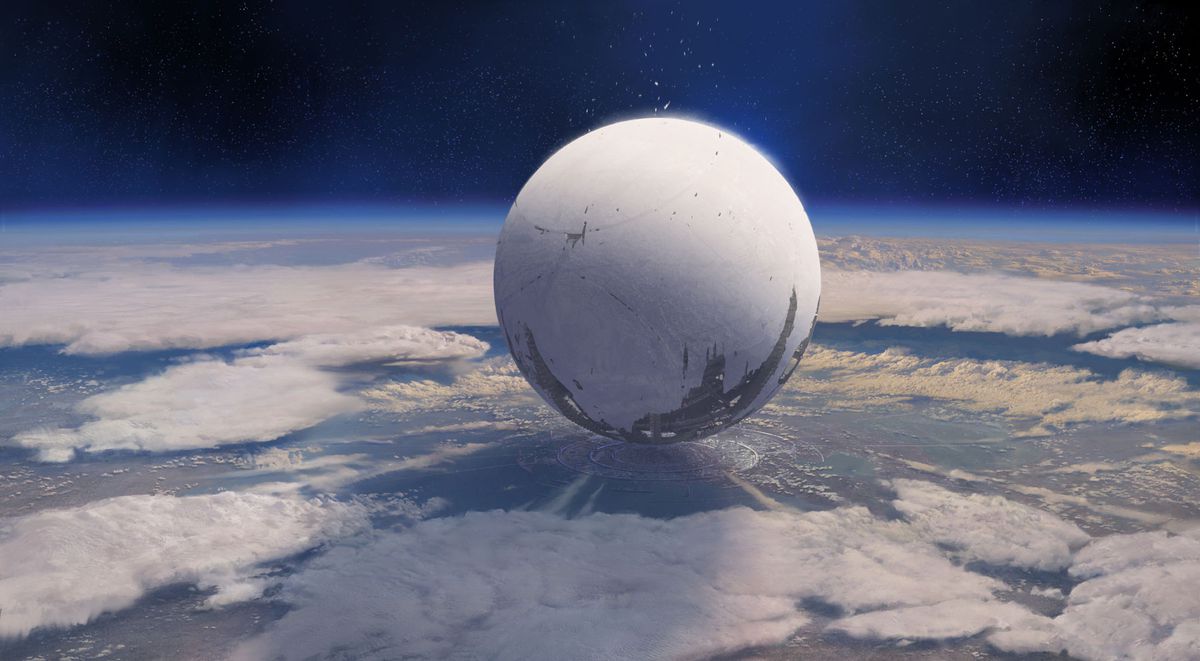 Years later, humans eventually discovered the Traveler hiding in the Sol system. It granted humans a golden age that increased their technical prowess. But centuries later, the Darkness found the Traveler and attacked. Before the Traveler could flee, a human-made AI named Rasputin allegedly shot it down, stranding it on Earth.

Damaged and needing defenders for its new home during this new period of Darkness (known as the Collapse), the Traveler released Ghosts: small, dronelike creatures that carry some of the Traveler’s Light. Ghosts scour the system to find a perfect Guardian to pair with: a dead human, Awoken (mutated space humans), or Exo (a robot with a human mind). Using the Light, the Ghosts form a bond with a dead body they deem worthy (their Guardian), raising it to life and imbuing it with superpowers.

Each Guardian only has one Ghost, and if the Ghost is destroyed, they’ll lose their Light. But if the Guardian is killed and the Ghost survives, it can resurrect the Guardian over and over again. That’s how players canonically respawn in Destiny.

The original Destiny and Throne Worlds 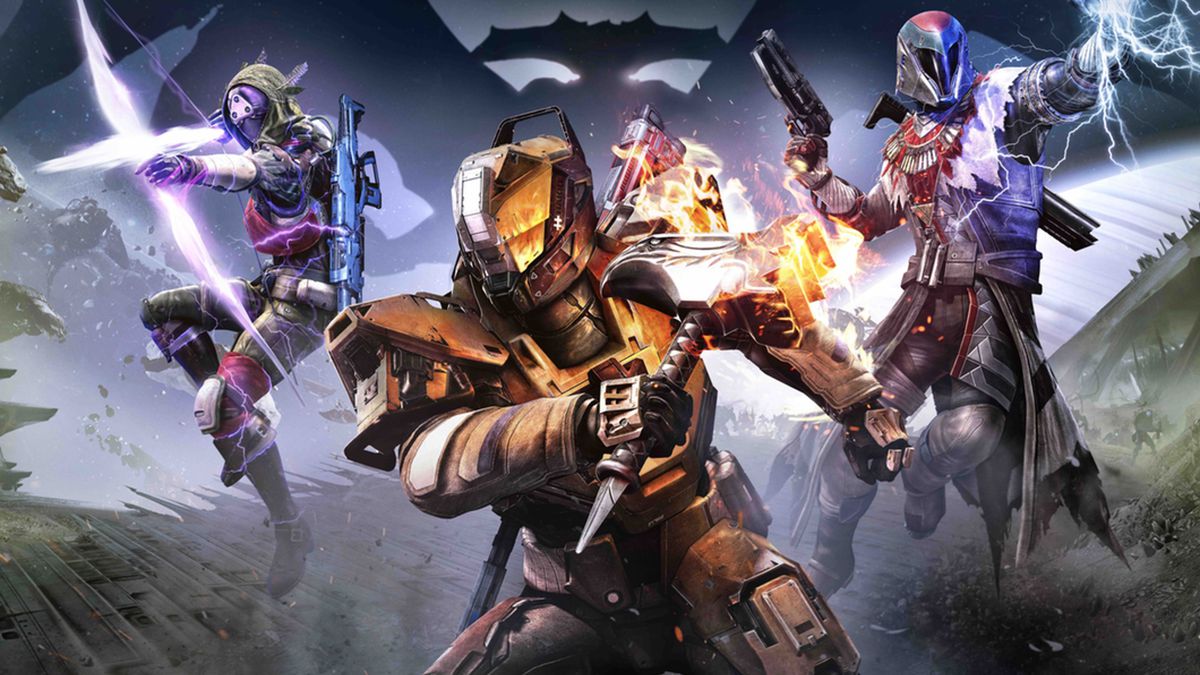 The original Destiny tells a bit of a scattered story about an alien race called the Vex (time-traveling robots) and a fascinating location called the Black Garden. That likely won’t be important to the story in The Witch Queen, so we’re going to move past it.

What you need to know from Destiny is that Guardians killed a Hive God named Crota in The Dark Below expansion, and he just happened to be the son of Oryx. In The Taken King, Oryx came to seek revenge. In the opening battle, he “killed” Queen Mara Sov of the Reef and sent her brother, Uldren Sov, crashing into a nearby planet.

The Guardians infiltrated Oryx’s Dreadnaught ship and killed him. But instead of dying, Oryx went to his Throne World.

Throne Worlds are pocket dimensions reserved for extremely powerful beings like Oryx, Savathun, and Xivu Arath. (Mara Sov also has one, but she wished for it from a magic dragon named Riven, so it doesn’t totally count.) Throne Worlds are created in the owner’s likeness, and when a Throne World’s owner dies in real life, they’ resurrected in their Throne World before eventually making it back to the real world.

The only way to kill a creature who has a Throne World is to kill them inside the Throne World itself. The King’s Fall raid from The Taken King saw a group of Guardians do just that: They infiltrated Oryx’s Throne World and killed him for good. 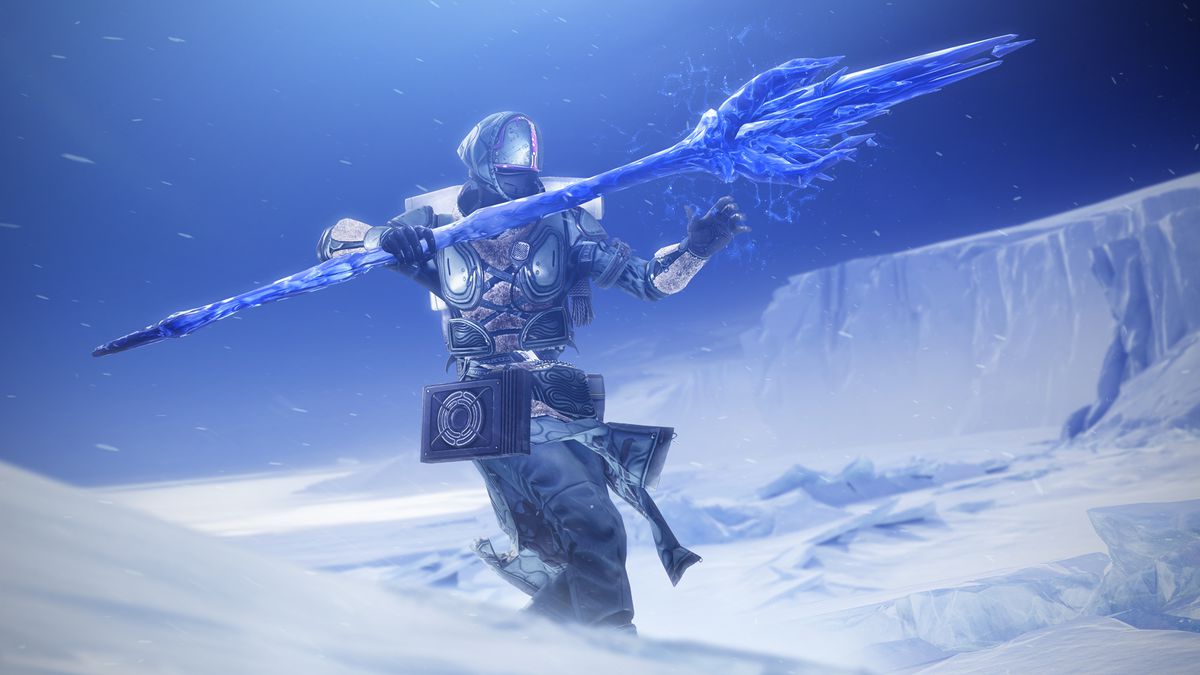 The Red War campaign in Destiny 2 saw a war-focused race called the Cabal attack Earth and seal off the Traveler’s Light, causing Guardians to briefly lose their powers. The Guardian Vanguard (the leadership of the Last City) repelled the Cabal forces and reclaimed the Light. In the Leviathan raid, players proved themselves to the Cabal’s lavish ex-emperor, Calus, who is obsessed with the Darkness.

In the Forsaken expansion, Uldren Sov returned, and killed the beloved Hunter Vanguard Cayde-6 and his Ghost. The Guardians sought revenge for Cayde, and chased Uldren to the gates of the Awoken home world of the Dreaming City. It was then revealed that Uldren, who had been looking for his sister the entire time, was nothing but a pawn of Riven (who in turn was a pawn of Savathun). Players defeated Riven in the raid called The Last Wish.

In the Shadowkeep expansion, Guardians returned to Earth’s moon and discovered a Pyramid Ship (the Traveler’s equivalent, but for the Darkness). A year later, an armada of these Pyramid Ships showed up in the Sol system and devoured entire in-game locations, including Mars.

Around this same time, Guardians went to Europa during the Beyond Light expansion to stop the leader of a race of enemies known as the Fallen — scavengers who lived with the Traveler before it abandoned them. Players discovered a shard of Darkness there, and were granted new Darkness powers: Stasis.

The year leading up to The Witch Queen 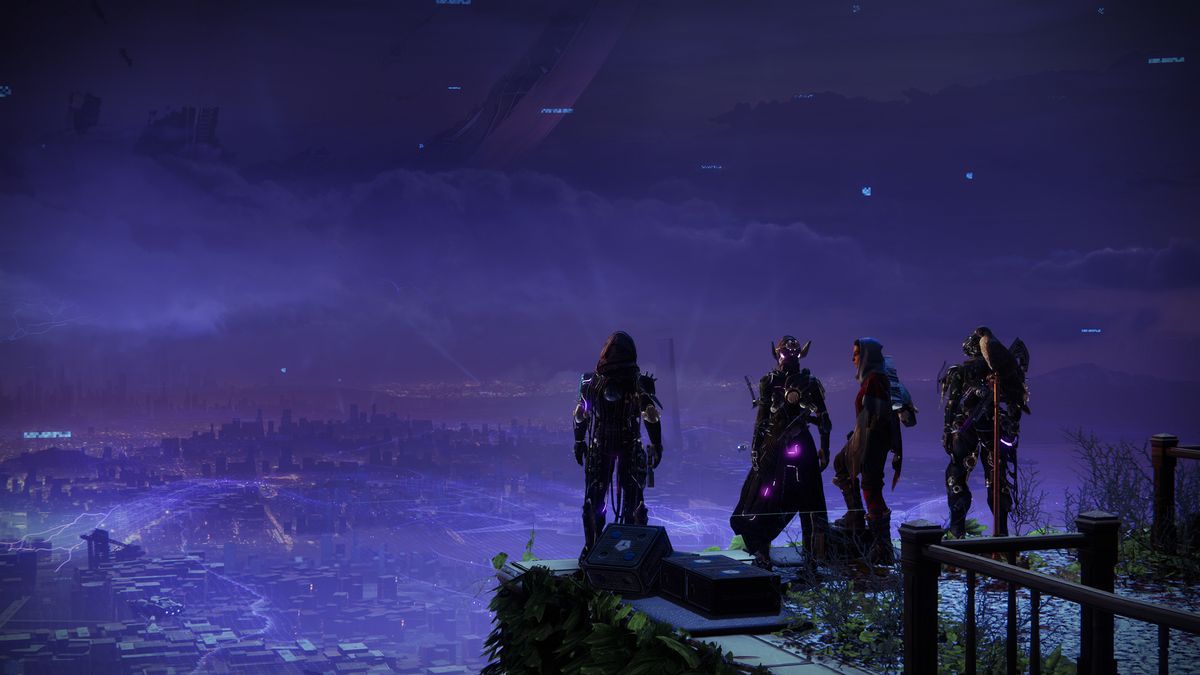 In Season of the Hunt, a famous Warlock named Osiris lost his Ghost and therefore his Light. A Hive Knight almost killed Osiris, but a new Guardian saved him: Crow. Despite being a new hero, Crow’s face was familiar. He’s actually Uldren Sov, returned to life as a Guardian.

When Guardians are created, they have no recollection or knowledge of their former lives. But because other characters recognized Uldren as the man who killed Cayde-6, he was hated and shunned. Players rescued Crow from an underground gangster known as Spider (who had boobytrapped Crow’s Ghost in order to enslave the new Guardian), and the Light-less Osiris took him under his wing.

During this season, Guardians repelled Xivu Arath’s forces from The Dreaming City.

In Season of the Chosen, Caiatl, daughter of Calus, showed up to offer the Vanguard a deal: The Cabal would help repel the Pyramid Ships if the Vanguard swore fealty. Commander Zavala — the Titan Vanguard — said no, and the Guardians spent the season proving their worth to the Cabal empress. A rogue fact of Caiatl’s crew attempted to assassinate Zavala, but Crow saved the day, revealing his true identity. He was accepted into the fold, and Caital allied herself with the Tower and its Guardians.

A special mission in this season also told the story of how Calus was consumed by the Darkness, and revealed that nobody knows where he is anymore.

In Season of the Splicer, the Vex plunged the Tower and the Last City into endless night. A sect of Fallen called the House of Light, led by a friendly captain named Mithrax, also sought refuge from the Vex in the Last City. Some leaders weren’t comfortable with having the Fallen so close, including famed Titan (and Osiris’ boyfriend) Saint-14, and an Exo named Lakshmi-2. Saint eventually saw the good in the Fallen, but Lakshmi turned the city against them, and was manipulated by Savathun into opening a Vex gate in the House of Light’s living quarters. The Guardians, Saint-14, and the Fallen banded together to save the city, and Lakshmi-2 was killed by the Vex.

In Season of the Lost, Osiris went rogue, and Mara Sov (back from her Throne World), Saint-14, Crow, and the Guardian chased him into the Dreaming City. Savathun then revealed that she’d been impersonating Osiris since Season of the Hunt. She trapped herself in a massive crystal and struck a bargain: If Mara and the Guardian helped her exorcise the worm from her body, Savathun would return the real Osiris unharmed.

While working to accomplish this, Savathun “gifted” all of Uldren’s memories to Crow, which caused him to freak out and leave the Last City. In the season’s final mission, Mara and her witches removed Savathun’s worm. Before Mara could kill Savathun, the Witch Queen disappeared, but not before making good on her promise, leaving a comatose Osiris behind.

Questions to keep in mind during The Witch Queen 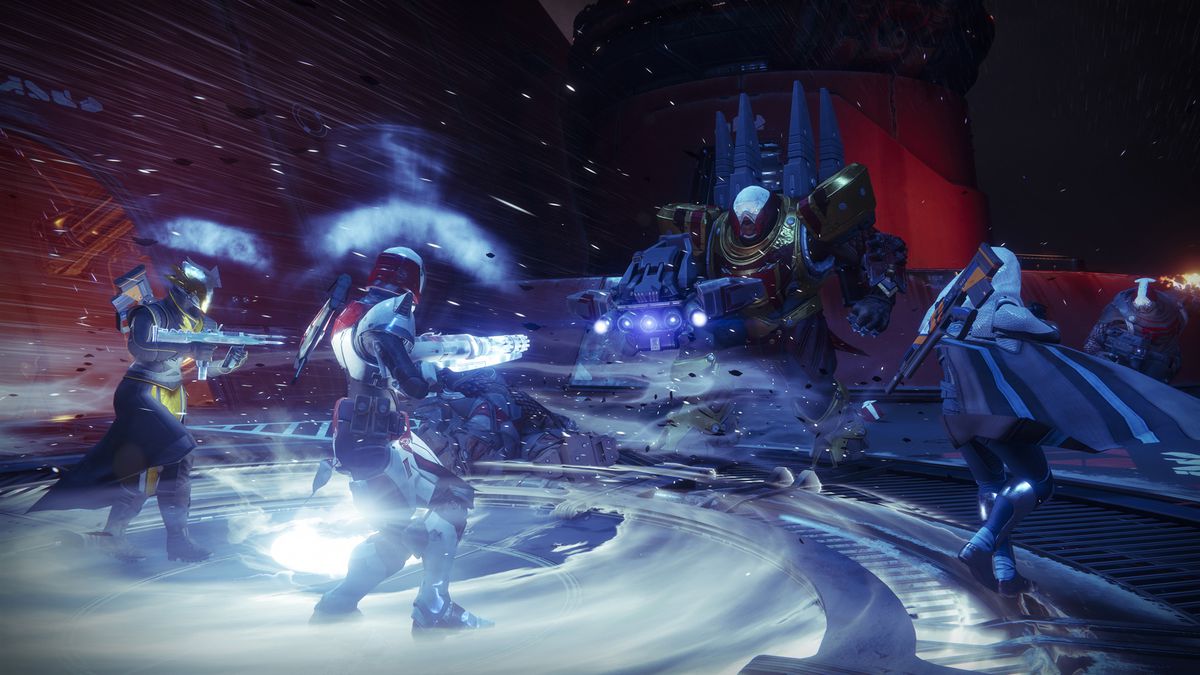 Now you’re all caught up with the abridged Destiny story. But as you go into The Witch Queen’s campaign, here are some ideas to keep at the front of your mind, and questions to ask:

With these questions and your newfound knowledge of Savathun’s story, you’re officially ready for The Witch Queen campaign, coming to Destiny 2 on Feb. 22.

Deep Rock Galactic has a new season with a robot nemesis

Deep Rock Galactic takes the frantic action of a four-player co-op shooter like Left 4 Dead, and then adds a ton of...
Read more
Games

It's only the third week of the latest...
Read more
Games

Rick and Morty appear as Kratos and Atreus in God of War: Ragnarok ad

In a promo spot that appeared alongside Sunday's premiere of season 6 of Rick and Morty, the duo kind of took on...
Read more
PC Gaming